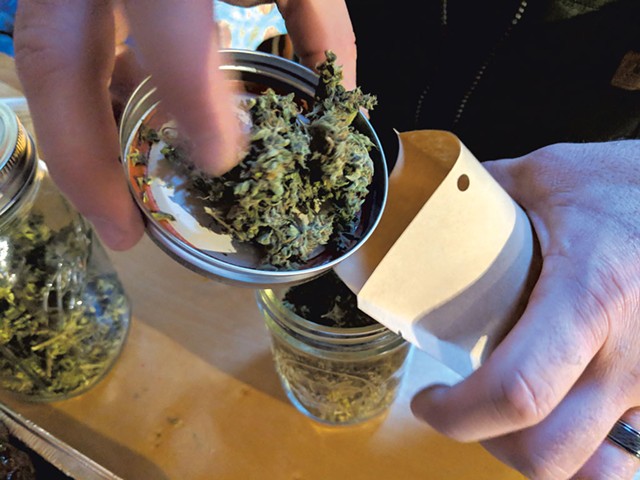 In honor of Veterans Day on Sunday, Heady Vermont staffers opened their Burlington office — and a sizable stash of cannabis — to those who have served in the military.

"We literally can't smoke all this weed," said Eli Harrington, cofounder and managing editor of the cannabis news, events and advocacy organization. He expertly rolled a joint at a makeshift bar amid jars of pot and a tin tray of cookies and brownies, each marked with a sticker that indicated they contained THC.

All the weed was free, no strings attached. That made the event legal — and very, very smoky.

Vinnie Mulac, a U.S. Navy veteran of the Vietnam era, sported a Navy trucker cap and a long, thick beard. He said he served active duty for three years, emphasizing that he did not see combat. He's a grower who's been on Vermont's registry since 2006.

There are a lot of veterans in Vermont's cannabis community, Harrington said, and they are an important part of advocacy efforts. "You can discount the old hippies and the bros with the flat-brim hats," Harrington said. But even marijuana skeptics are inclined to hear the vets out.

Harrington said he hosted the event to get "people hanging out and talking and using weed as a way to make other connections locally."

Mulac said some veterans have a special interest in federal marijuana policy because U.S. Department of Veterans Affairs doctors can't help their patients get it — even though post-traumatic stress disorder is a qualifying condition for inclusion on Vermont's registry.

Though the event was essentially a small group of people smoking pot together and talking over reggae music, it was clearly meaningful for some. Early in the afternoon, a vet handed Harrington a Navy challenge coin. The coins are often given to recognize service in a specific unit, role or operation. Giving one to a civilian is a sign of respect. Another vet told Harrington that this was the first time he'd looked forward to Veterans Day.

The talk turned to food and then to munchies for the glassy-eyed guests. Harrington led the group to a kitchen, where they dined on leftover pulled pork and macaroni and cheese, served up cold.