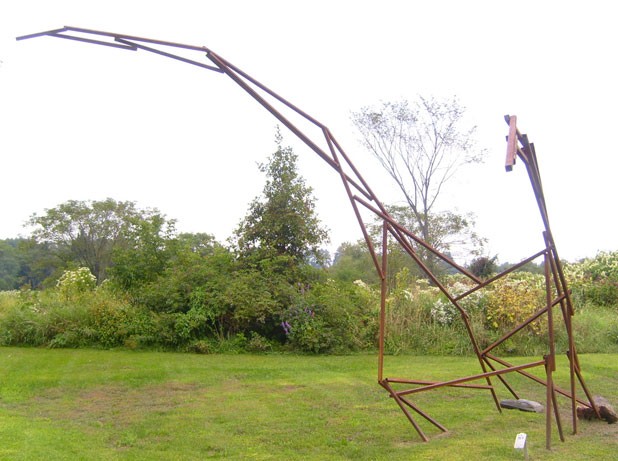 "Sculpture is an art of the open air," Henry Moore once said. "I would rather have a piece of my sculpture put in a landscape, almost any landscape, than in or on the most beautiful building I know." The Helen Day Art Center's annual "Exposed!" exhibition seems to validate the 20th-century English sculptor's thesis. Each year, the group sculpture exhibit in the open air turns the village of Stowe into a gallery without walls. A wide array of 27 sculptors was selected for 2008.

Joel Fisher is the sculptor who works most closely in the Moore tradition. His "S" is an anthropomorphic abstraction in bronze, about 5 feet tall, with graceful contours and gently sloped variations of mass running vertically along its smooth, dark sides. It's a traditional statue - a sculpture in the round whose mission is to beautify three-dimensional space, a purely aesthetic experience.

But there's also a story behind it. Last year about 30 of Fisher's bronzes were stolen, including "S." Thankfully, the pieces, valued at $1 million, were recovered from a local salvage yard.

Fisher's "S" is sited on the lawn of the Helen Day, one of the hubs of the show.

Exhibition curator Meg McDevitt also has a work on the HDAC lawn - an unusual piece entitled "Lawn Drawn." It's about 10 by 20 feet but only a few inches high. McDevitt placed about 20 lengths of rusty steel wire, bent like long, crazy croquet wickets, parallel to each other on a grassy patch. That section of grass hasn't been getting cut, so it's now considerably longer than the rest of the lawn. The rusty color of the wire enables the strange piece of Earth Art to stand out from its verdant surroundings.

An aggregation of seven nearly 15-foot-tall figures carved by Leila Bandar stand as a group in front of Stowe's municipal offices on Main Street. Entitled "Sometimes Looking for Fixed Stars," the figures seem carved from broad planks, and are all seen in profile. Silhouettes appear at both the tops of the planks and in negative-space cutouts, part way up the forms. Bandar imparted the figures with mystery; like the Moai figures of Easter Island, they stare with a curious hint of anticipation in their expressions.

The recreational path located behind the Stowe Community Church is another exhibition hub. Near the entrance to the path, an untitled construction by Ian Winsemius stands approximately 20 feet high. The work arcs with two wide-spread wings, like those of a landing seagull, and appears nearly weightless despite its monumental scale. It's completely comprised of straight steel rods organized into long, thin triangles and other geometric patterns, then welded together into the wing shapes.

Peggy Smith's "In the Name of Religion" has the strongest narrative of the show. Smith created a scaled-down cemetery and sited it beneath a leafy tree along the recreational path, like many a family plot seen in Vermont. But the faux boneyard she invented memorializes millions of war victims, and the names of the conflicts that took their lives are inscribed on cracked, weathered headstones. The stones seem to be slabs of concrete and bear names such as "Georgian Armenian 1918'" and "IRA England 1969-1997." Others give body counts as well as dates: "China Tibet 1949 1,000,000" and "The Holocaust 1933-1945 6,000,000." Looming over the graves is a purple and gold shrine with a large black cross within it.

This year's "Exposed!" marks the 16th annual installment of the event. It begins in the heat of July each year and closes in October, when the foliage is past peak. The show is worth seeing more than once. As outdoor sculptures interact with the seasons, time reveals details that could never be seen in a gallery.

Maps pinpointing the locations of all the Exposed! sculptures are available at the Helen Day Arts Center in Stowe.