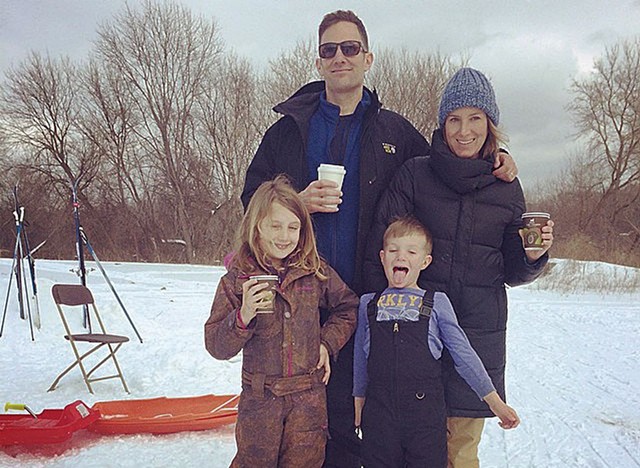 As I write this, only a few snowflakes have fallen. But I've lived in Vermont long enough to know what Mother Nature has in store for the months ahead.

When my husband, Jeff, and I moved here from New York City over 11 years ago, the big piece of advice many people gave us was to take up skiing or snowboarding. "It will make the winter so much more bearable," they told us. And they were right.

During our first winter in Vermont, we took snowboarding lessons and spent many weekends on the slopes. Same deal the following winter. But then I got pregnant, which put a kibosh on the shredding. And then I had a baby who turned into a toddler. And then that whole sequence of events happened again.

When my kids were 5 and 3, we tried skiing as a family, figuring — just like when we first moved to Vermont — that an activity we could do together would make winter more bearable for all of us. But it was a crowded holiday weekend, we weren't able to get the kids into lessons and we weren't equipped to teach them ourselves. My daughter, Mira, fell backward on the magic carpet and freaked out. My son, Theo, abandoned his mittens, helmet and goggles on the bunny hill. The whole experience was a disaster. I wrote about it for the Kids VT blog, asserting that skiing wasn't for our family, "at least not yet."

Fast forward three years and still, as Mira likes to say, "We're not a skiing family." Jeff and I haven't written off the activity altogether but for now we'll stick to intermittent day and overnight trips that don't involve skiing to spice up our winter weekends, like the ones featured in our extended "Destination Recreation: Cold Weather Edition." In it, seven writers describe their families' favorite ways to pass the long, frigid days, from overnight trips to Lake Placid and Montréal to shorter outings at the Fairbanks Museum and Planetarium and King Arthur Flour Bakery + Café.

The skiers out there might be interested in "Fit Families." It's about Ski Vermont's Fifth Grade Passport program, which enables fifth graders to ski free all season long.

For those of you who prefer reading by the fire, we've got two longer features, both of which tackle more difficult topics. In "Immediate Families," Ken Picard talks with three families caring for some of the state's more than 1,300 foster kids. His compassionate profiles highlight both the challenging and the rewarding aspects of fostering children who've been removed from their parents' homes. And in "More Than Words," Kymelya Sari describes how rural Vermont teens who stutter find support and treatment.

As we start planning for the months ahead, we're saying goodbye to contributing editor Megan James; she's leaving Kids VT to be the outreach coordinator at Town Hall Theater in Middlebury. Two years ago, Megan took over the Kids VT managing editor role when she was pregnant with her daughter, Joni. Since then, she's shared her adventures in motherhood humorously and eloquently in this publication — from terrible pregnancy sickness to pumping at work. She's been integral in making Kids VT what it is today, and we'll miss her dearly.

Seven Days assistant editor Meredith Coeyman will be taking Megan's place. She wrote "Rebirth Plan: A 'natural' mom comes to terms with her C-section," for our 2014 Maternity Issue, which won first place in the personal essay category in that year's Parenting Media Association Design and Editorial Awards. We're excited to welcome Meredith to our team!