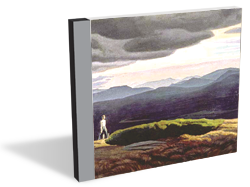 WDY is the pseudonym of local DJ and producer Matt Woodward. For several years, the 20-year-old native has been creating tracks in his St. Albans bedroom, honing his craft until he finally had something to show the world. Take You Home, his 11-track debut LP, is the fruit of those labors. Dense, atmospheric, and rooted in a variety of sounds and styles, Woodward’s freshman outing offers a tantalizing glimpse from a promising young artist that capitalizes on his obvious talent, yet reveals he’s still got plenty of room to grow.

Woodward claims a wide array of influences, from the electro-pop indie stylings of bands such as MGMT to hip-hop mogul Kanye West to witch house phenom Balam Acab. Fleeting elements of each of those artists’ styles dot Woodward’s hazy soundscapes — especially Acab. But in testament to his ingenuity and ability, Woodward never seems constrained by hero worship, as many young artists often are. Rather, he uses inspiration as a foundation on which to build his own sonic structures — often only to tear them back down.

Take You Home works as something of an open love letter to Woodward’s surroundings. On the album’s first two cuts, “St. Albans” and “Vermont,” he paints impressionistic sonic landscapes, melding steamy electronic beats with almost wordless vocals — the last enveloped in swells of Auto-Tune that suggest time well spent with recent Justin Vernon records, especially his latest with Volcano Choir.

Though the record bears almost no discernible lyrical content, Woodward imparts a sense of isolation and melancholy that should be familiar to anyone who has endured Vermont winters. Even in the album’s more danceable moments, such as the downtempo “Dreams (Livelong)” and the electro slow jam of “The Weekend” — the latter presumably inspired by Canadian artist the Weeknd — Woodward manipulates a chilly atmosphere.

The only flaws on Take You Home are a few occasionally clunky cuts and one or two jarring transitions. But those minor blips add a certain handmade appeal, a welcome warm quality amid this tapestry of coolly inorganic sound. And that cuts to the essence of what makes Woodward’s debut so inviting: It has heart.

Take You Home by WDY can be streamed at soundcloud.com/wdy-music.