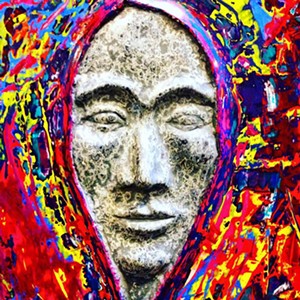 St. Albans' Matt Woodward has self-released electronic music as WDY since 2013 — some seven singles, EPs and full-lengths overall. The 24-year-old producer's latest full-length is Revelations, released in October 2017. For those who have strayed from God — myself included — and need a crash course in Christianity, the Book of Revelation is a New Testament volume also known as Apocalypse. The titles stems from the Greek apokalypsis, meaning "revelation" or "unveiling." WDY's Revelations unveils Woodward's artistic strengths and weaknesses through a musical allegory that plays out like the struggle between the good and not-so-good aspects of electronic music.

The album opens with a saxophone sample drifting out through an expanse of delay and reverb on "Can Anyone Hear Me Out There?" An unsourced vocal sample echoes the phrase "God is real" and other phrases about "light," deepening the track's vague spiritual undertones.

Despite the serious setup, the album's first proper song, "No Worries," presents a calm, '80s Muzak vibe with little substantive content beyond a generally uplifting choice of chords. A guitar sample shimmers low in the mix over a faint bass loop, mingling with synth melodies. The song then morphs abruptly with the addition of an off-kilter stock hip-hop drum loop. The elements compete clumsily, making an otherwise hypnotic beat awkward. Here WDY demonstrates why so many analog purists think of digital production as, well ... evil. The ease of collaging so many layers sometimes hampers the feeling of the music, especially against the clarity of the digital grid.

WDY continues on the path of derivative digital temptation on "Living Color." The beat is smooth enough, following the formula of any chill-hop or lo-fi playlist. While the producer's style and sample choices are uplifting, it is difficult to puzzle through the pieces of other artists and understand what WDY is communicating as a musician himself. The track feels a bit constrictive and ill fitting, like a standard-issue jumpsuit.

The sample usage on "Flowervale" is confusing and discordant, particularly when the composition shifts from programmed loops into an aggressive guitar riff. Again, with the infinite possibilities of repurposing loops in digital production, it can be difficult for an artist not to get lost in the stock bin.

"Gone 'Til Dawn" redeems the album in a major way. There's some Tame Impala and Unknown Mortal Orchestra influence in its genre-bending, psych-rock instrumentation. It's a standout track that breathes some needed organic emotion.

Toward the bottom of the album, fans of epic drops and future bass will take pleasure in "All by Myself." Huge synth stabs and a dubstep beat induce rave adrenaline; it's a well-mixed piece.

Despite his occasional creative confusion, WDY's experimental tendencies yield some strong moments on Revelations. Musically, Woodward is certainly on a track to grow into more focused visions.