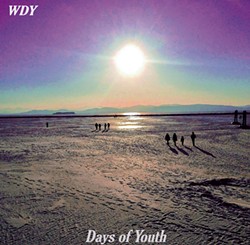 We'll say this for Matt Woodward: The kid's got ambition. Recording as WDY, the 22-year-old electronic producer and St. Albans native released five albums and EPs from April 2013 through December 2014. He showed budding promise from the first and exhibited increased refinement and musical acumen to match his endless curiosity on each successive recording. Woodward's workmanlike grind was all prelude to his latest effort, the sprawling Days of Youth, a 16-track opus that stands as his most fully realized musical statement. Scratch that. The album, which is accompanied by a deeply impressionistic short film, is Woodward's finest artistic statement.

As its title implies, growing up is a central theme of Days of Youth. Though the electronic album is largely wordless, Woodward carefully selected certain vocal samples to give voice to the concepts of his compositions. On "Sunsets," for example, local rapper Learic sermonizes on what it means to be an artist and just how much work and emotion goes into producing art behind the scenes. "People don't see what has made you you," he says over a shimmering bed of synth. "It's not even about what you've done. It's about what you set in motion."

Woodward has clearly taken Learic's words to heart. On his earlier recordings, Woodward's results didn't always reach the admittedly lofty heights of his outsize ambition. But he's dedicated himself to his craft wholeheartedly, and it shows. Each cut here is sonically provocative and efficiently crafted. Woodward has learned that tact and nuance are just as effective as blown-out production. The result is the work of a maturing artist.

Woodward has also learned to ask for help. Where he previously worked almost exclusively alone, on Days of Youth he's enlisted the aid of some talented friends. Local songwriter Ebn Ezra turns up on "Pillow Talk," which could pass for an outtake from an early mixtape by the Weeknd. And VT expat Guthrie Galileo drops in on the album's penultimate track, "Until We Meet Again."

Woodward says he picked the brains of numerous local electronic musicians in composing the album, and that influence is apparent in every crisp drop and creative change.

At its core, Days of Youth is an album about growth. Woodward's inspiration derives from questions about personal growth, what it means to be a grown-up, a better person and friend. But he found his answers in his artistic growth. As Learic suggests on "Sunsets," those two things are inextricably related. To paraphrase, if you feed your art, it feeds your heart — and vice versa. Matt Woodward did precisely that and came up with the strongest and most profound release of his young career.

Days of Youth by WDY is available at wdymusic.bandcamp.com.

Speaking of WDY, Days Of Youth