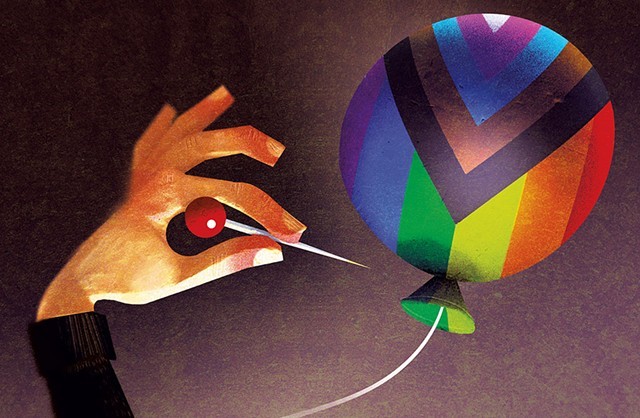 WCAX-TV has quietly erased from its website and social media accounts a September 28 news report about a transgender volleyball player at Randolph Union High School. The story went viral among conservative media outlets and was condemned by LGBTQ groups and allies.

But on Tuesday, links to the controversial story and a recording of the newscast from that night went instead to a page that read "404/Not Found." When Seven Days asked about the missing content, WCAX news director Roger Garrity said the station took it down last week "to prevent others from using our reporting to attack people in the transgender community.


"We didn’t announce it then for fear it might further inflame the situation," Garrity wrote in an email. "We are now working with LGBTQ advocates on a message to the community acknowledging the harm that was caused."

In response to follow-up questions, Garrity said the station was working with Outright Vermont and GLAAD to craft its message and would put it on the 6 p.m. newscast "as soon as we have it ready to go."

Mother of Transgender Student in Randolph Says Her Daughter Was Bullied
By Alison Novak
Education
WCAX's initial story reported that the Randolph Union High School girls' volleyball team had been banned from its locker room while school officials investigated a conflict involving a transgender athlete on the team. But the piece featured just one interview with a first-year volleyball player, who said a transgender teammate made "an inappropriate comment" and that "biological boys" should never be allowed in a girls' locker room.

The story quickly went viral on right-wing websites such as Fox News, Daily Signal, the New York Post, the Daily Wire and the Epoch Times. Shortly after, the Randolph school district was forced to disable its website after it was hacked and inundated with hate speech targeting transgender people.

The transgender student's mother spoke out last week, telling Seven Days that the WCAX story had grossly misrepresented what actually happened. The mother said her daughter was actually the one targeted, by several girls on the team, and that the school closed the locker room while investigating the incident in order to keep everyone safe. Orange Southwest School District superintendent Layne Millington, who said he was unable to comment about the details of the investigation because of federal law protecting student information, confirmed part of the mother's account in an email to Seven Days.

The locker room was shut down "to ensure student safety while the investigation is conducted, and the shutdown applies equally to the entire team," Millington wrote.

Neither the mother nor her daughter were contacted by WCAX for its initial story. But after the report went viral, both emailed Garrity to voice their disgust with the station's reporting.

"The news piece you produced was aggressive, inaccurate, one-sided, and just altogether ugly," the mother wrote. "Exposing a child who has done nothing wrong, thereby making a dangerous world feel even less safe for transgender youth, is objectively a really terrible decision."


"News is meant to inform but all you have done is enable lies that not only hurt me, but hurt the transgender youth that are within Randolph and Vermont," the transgender student wrote.

When asked for comment about the report last week, Garrity initially defended it.

"The purpose of our story was to examine a dispute over locker room usage and what state education policy has to say about it," he wrote in an October 3 email to Seven Days. "I believe that’s what our story did."

The next day, the American Civil Liberties Union of Vermont released a statement in support of the transgender student, citing the "inaccurate and misleading local media report" aired by WCAX.


“Let’s be clear: all trans students have a right to be free from discrimination and deserve to learn in environments where they feel safe in their gender identity and expression," ACLU legal director Lia Ernst wrote in the statement. "Furthermore, it is the policy of the State of Vermont that harassment and bullying, including on the basis of gender identity, 'have no place and will not be tolerated in Vermont schools.’"

In response, Millington announced two community forums about the situation. The first was scheduled for the night of Tuesday, October 11; the second on October 20.