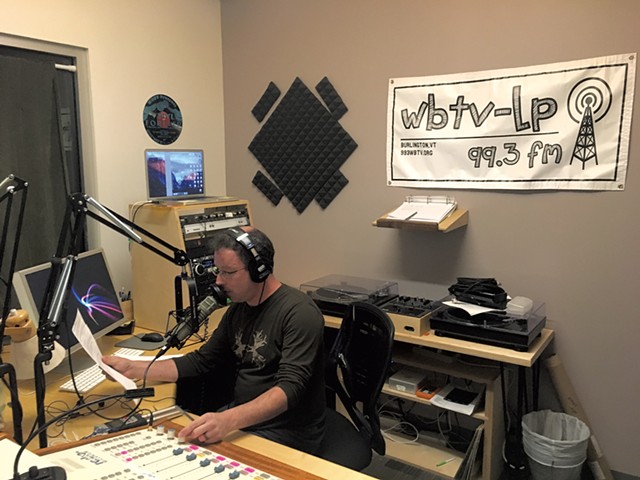 Revelers along the Pine Street corridor in Burlington this weekend might want to bring along transistor radios. No, not to sneakily catch a few innings of the Red Sox game while bouncing around the South End Art Hop pretending to be cultured. Rather, because Burlington's newest low-power community radio station, WBTV-LP, is going terrestrial — assuming the weather gods cooperate with construction of its broadcast tower.

Listeners within range of the tower's 100-watt signal will finally be able to pick up WBTV-LP at 99.3 on their FM dials. After nearly a year of exclusively online programming, the station will broadcast live from its studio at the RETN & VCAM Media Factory on Flynn Avenue this Friday and Saturday, September 8 and 9.

According to its website, WBTV-LP's mission is to "connect people in Burlington with community radio that is created and curated locally, dedicated to the free and creative exchange of ideas and culture, and reflective of the diversity of our city."

"This is real, grassroots radio," says Grant. She sees WBTV-LP as an extension of other community stations in the area, such as fellow low-power FM stations WOMM 105.9 the Radiator, WWPV 88.7 the Mike at Saint Michael's College and WRUV 90.1 at the University of Vermont. Grant has been involved with the UVM station for more than three decades.

She explains that a key component of WBTV-LP's vision is to reflect a broad range of ideas and backgrounds through similarly diverse programming. That means the station's schedule will include an eclectic mix of shows. For example, the current lineup features DJ Live's electronic music showcase "On Beat"; "Blockbuster," whose host Ryan Dunleavy reviews Hollywood flicks and assesses their cultural impact; and Dom the Barber's variety show "First Barber on Mars."

"Our goal is to be complementary to the other community stations in the area, but also to be very different," says Mulvaney-Stanak, a self-professed "radio nerd" who, like Grant, has a long relationship with WRUV.

Mulvaney-Stanak has been a driving force behind bringing WBTV-LP to life since the project's inception. The veteran DJ serves as the chair of the station's board, the so-called LPFM Core Group — aka the Red Tape Committee — which included members from VCAM, RETN and Channel 17. The station now operates under the Radio Advisory Council, of which Mulvaney-Stanak and Grant are members.

"Low-power stations, very intentionally, are supposed to be local and community focused," Mulvaney-Stanak says, likening the station's limited broadcast power to the range of a household light bulb. "It's about returning the airwaves to the people. And that aligns with our mission at VCAM: to provide community access to media."

In addition to serving the listening public with an array of locavore programming, WBTV-LP has an educational function: to train community members on the ins and outs of radio.

"When people leave our training programs, the goal is that they could walk into a station anywhere in the country and be a DJ," says Mulvaney-Stanak.

The station has very few restrictions on the kinds of shows it will broadcast. Essentially, applicants simply need to show that they have an idea for a program that jibes with the station's guiding principles and commit to being active members of the WBTV-LP community. Beyond that, pretty much anything goes — within persnickety FCC regulations, of course.

"We don't want to turn anyone down," says Bill Simmon. Simmon is a member of both Core Group and RAC, and director of media services at VCAM. "That's not to say that we won't. But we want anyone who has the interest in radio to be able to pursue it."

Correction, September 7, 2017: An earlier version of this story mistakenly stated that the late LJ Palardy was among the original organizers of the station. Also, WBTV-LP is currently run by the Radio Advisory Council, and Llu Mulvaney-Stanak's tenure with VCAM ended in 2016.