Watts Up: In February, the light's fantastique in Montreal 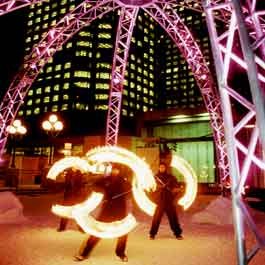 Sad, isn’t it, to put away the Christmas lights? They were a welcome respite from the darkness that descended so early last year, on September 11. Our lights went into storage a couple of days after New Year’s Eve, and I truly miss them. It had been my habit since mid-December to plug in the tree and light up the front window as we made our morning coffee and read the paper. Even before the sun arrived, a warm, rosy glow enveloped us during those first moments of the day.

If you too like defying winter’s natural gloom, you should consider attending Hydro-Québec’s Festival Montréal en Lumière, a.k.a. the Montréal High Lights Festival. The third annual incarnation of this multi-sensory event will take place February 14 to March 3 at scores of venues throughout the city. The three-part program is designed to stimulate the senses — specifically sight, hearing and taste — with the Celebration of Light, the Special Events and the Art of the Table, respectively. While some winter fests celebrate snow, this one aims to melt it.

Setting the night ablaze, the Celebration of Light events occur throughout central Montréal, with the largest free venue at the city’s “festival central” — Place des Arts-Complexe Desjardins. Magnificent and magical displays, including fountains of light, animations, pyrotechnics and bonfires, warm the crowds until 11 every night.

The Festival is also collaborating with the Musée des Beaux-Arts de Montréal to host the International Lighting Symposium of Canada, featuring luminous installations by five renowned artists. Restaurants and other institutions are encouraged to put out their own fanciful lighting displays. Details will be released at the end of January.

No amount of new-fallen snow can quiet this year’s Stella Artois Special Events artists. The focus this year is “The Human Voice,” and headliners include tenor Jose Carreras and the humanitarian soprano Barbara Hendricks. A special Voix Méditerranéennes series features Greek, North African and Corsican artists. Cirque Éloise will fly to the music of the festival orchestra at the Salle Wilfrid-Pelletier. A dozen other recitals and concerts fill out the “hearing” bill, ranging from the medieval to the most modern. The Special Event series is posted on the festival Web site.

A third entrée to the winter comforts of Quebec is edible: a soup-to-nuts collection of culinary events called Les Arts de la Table. This isn’t a one-shot, 50-cents-a-taste frenzy; it’s a two-week celebration of haute cuisine. Les Arts de la Table is co-sponsored by SAQ — the Quebec equivalent of our Department of Liquor Control — and includes an opening gala, three “convivial meals” and four types of tastings.

The kick-off chill-chaser is a six-course Portuguese meal matched with at least eight port wines — at $195 per person. More accessible, at $30 per person, are the convivial meals — three themed evenings of food, music and dancing. An evening of wine tasting awaits the early birds who sign up for one of five events in the prestigious Latini wine cellar — $150 person, limited to 14 each evening. In addition, restaurants throughout the city will offer special menus and SAQ’s featured wines. More details will be released later this month, though the festival’s main food events are already posted on the Web site.

If you’re a newcomer to Montréal, the 90-minute foray called “Circuit of Light” is an excellent way to enjoy the festival’s lighted sights and is only $12.50 per person. This guided walking tour starts from Old Montréal’s Place Jacques-Cartier, where festival displays illuminate some of the city’s finest Beaux-Arts architecture. From there it crosses the Place d’Armes, providing a great skyline view. Next is Chinatown, illuminated with Chinese New Year decorations. The tour concludes with hot chocolate at the festival’s outdoor headquarters, Place des Arts.

An alternative tour, also 90 minutes long but just $10, explores Underground Montréal — the shopping and public complexes stretch for 65 kilometers beneath the downtown area. History, architecture and anecdotes about city life color this cozy tour, which also concludes at the Place des Arts. Several dates and times are available for both tours, Thursdays through Sunday during the festival, and special arrangements can be made for groups of 10 or more.

It sure beats huddling over a couple of candles.