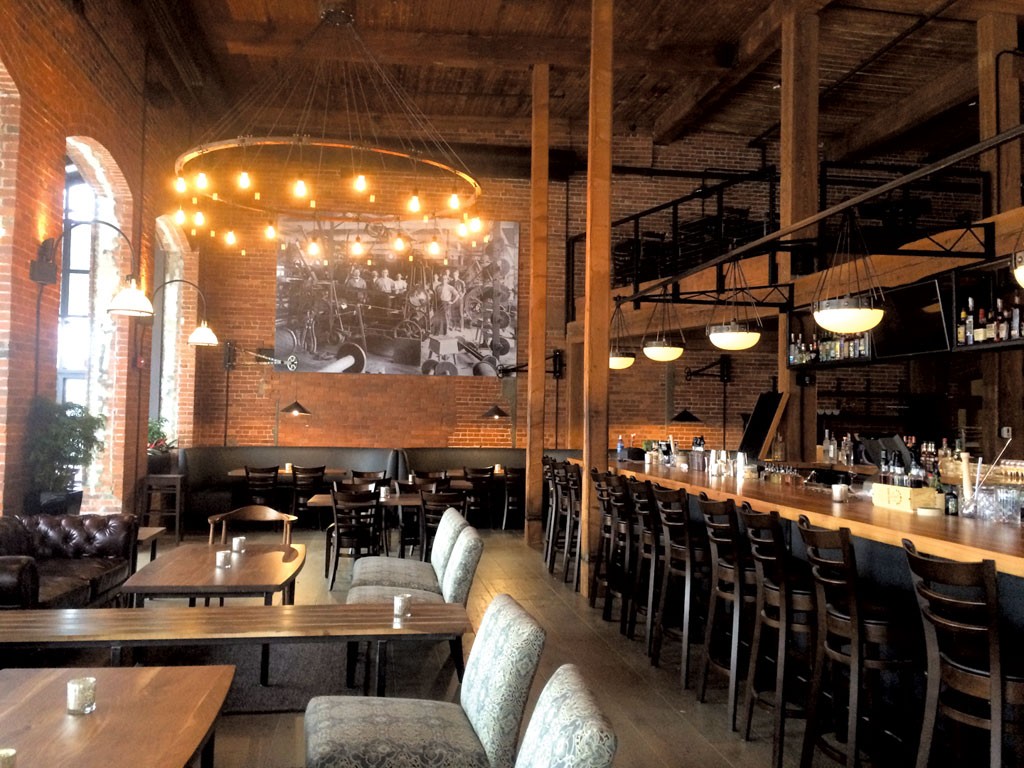 In 1912, the American Woolen Company's fourth Winooski factory opened in the building now known as the Champlain Mill. France, Germany, Poland and Lebanon were just a few of the countries represented by the immigrants who labored at its machines. Now, the faces of those workers are back at the mill in the form of stark, wall-size photos, reminding guests at Waterworks Food + Drink of the history behind the brick interior overlooking Winooski Falls.

Soft openings will begin late this week for the new restaurant owned by Pizzeria Verità co-owner David Abdoo. Fellow Verità co-owner Leslie Wells, who's been consulting on the opening, is not the only big name to join Abdoo at his nearly 200-seat restaurant. Manager duties will be shared by former Verità floor manager Sarah Johnson and David Logan, the genial host at Logan's of Vermont, which recently closed its Main Street location.* Former Sky Burgers owner Sky Kenney will help manage the kitchen with chef Sergjio Shantoja.

The international menu is still being refined, but Abdoo plans something for every palate. Lamb meatballs offer a suggestion of the owner's Lebanese heritage, while Verità fans will be happy to know that the wood-fired oven will turn out flatbreads. Other offerings include shared plates, among them a mussel dish that Abdoo calls one of his favorites.

Bartender Sam Nelis, another Verità import, took inspiration from the venue to create two cocktail menus. The "tried and true" drinks are historical classics, including an 1830s-era Sherry Cobbler. Waterworks originals, including the Dye House and Bobbin of Roses, are named for elements of the mill. The Smoking Loom combines Del Maguey crema de mezcal, cumin-scented kümmel, cava rosé, quince, lime and rosemary. They're joined by 13 beers on tap and four or five draught wines.

Diners looking for a spot by the window are less likely than ever to be disappointed. Abdoo has added new seating near the water, and the second floor affords guests a view of the whole restaurant — plus the rapids. In summer, a garage door will open to create even more seating outdoors.

Other plans for the future? Once dinner is under control, Waterworks will serve lunch and weekend brunch.

Clarification 12/18/14: Logan's of Vermont recently closed its Main Street location, but the business has not closed.

The original print version of this article was headlined "Milling Ahead"