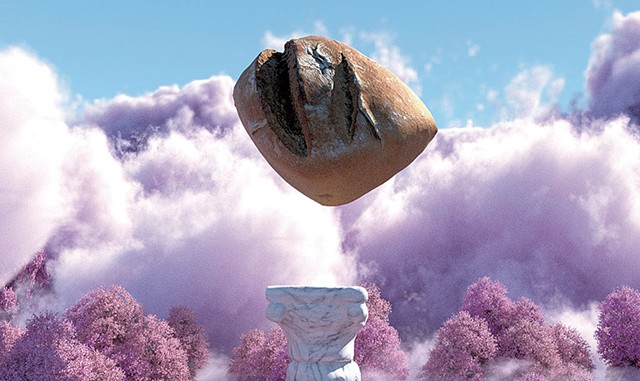 A Vermont-based solar energy company believes that storytelling has the power to bring people into the movement for climate action.

Films about sustainability are an effective way to spread that message, according to Tavit Geudelekian, integrated marketing director of Waterbury-based solar energy installer SunCommon.

"We have always relied on the power of storytelling to bring people into the solar energy revolution," he said.

The third annual Climate Action Film Festival, hosted by SunCommon, takes place virtually on Wednesday and Thursday, March 16 and 17. It showcases 10 short documentary films about climate action from filmmakers around the world. Five films will be screened each night in a 45-minute block, followed by 15 to 20 minutes of prerecorded discussion from the filmmakers of the night's closing film.

"We need to make sure that climate action feels relatable and achievable." Tavit Geudelekian tweet this

The films selected for this year's festival focus on broad themes, such as food and youth activism. The aim is to make the climate movement feel accessible to the everyday person, said Geudelekian, who is also the director of the festival.

"We need to make sure that climate action feels relatable and achievable," he said.

All proceeds from the two-day festival will be split between two local climate action organizations: 350 Vermont, a direct-action group based in Burlington; and NY Renews, a coalition of about 300 environmental change groups scattered across the state of New York.

Each of the first two festivals raised more than $5,000 from pay-as-you-want admission tickets. Organizers are hoping for a similar result this year, Geudelekian said.

Among the films is the six-minute "Only a Child," an animated accompaniment to the speech of youth activist Severn Cullis-Suzuki at the 1992 United Nations Conference on Environment and Development in Rio de Janeiro. Swiss director Simone Giampaolo split the speech into 20 segments, each of which is animated by a different artist in a different style. The filmmaker calls it an eclectic mix of CGI, sand animation, stop-motion animation and other forms.

In a conversation with Seven Days, Giampaolo said it's exciting to be included in a film festival dedicated entirely to environmental concerns. "It is a paramount topic to be talked about," he said, noting that his film is "addressed to adults who haven't done enough in the past 30 years to really preserve nature and the planet."

The director conceived the film in early 2019 and finished it in mid-2020, when the pandemic closed many festivals and complicated its release, Giampaolo said. In 2021, several festivals recognized the short, including the Los Angeles Animation Festival, the Stuttgart International Festival of Animated Film and Oscar-qualifying festivals such as Aspen Film. Giampaolo was also able to show the film at COP26, the 2021 United Nations Climate Change Conference in Glasgow.

Other films featured in the festival include "7 Hectares Back," the story of an accountant who quit his job to restore forest habitat in his native Ecuador; and "A Story About Bread," which explores bread as a possible culprit in the planet's climate crisis.

"EVE" offers a look into the life of a 9-year-old girl who lives in one of the oldest off-the-grid communities in the United Kingdom. "Green the City" highlights a pastor in St. Louis who embraces the cause of renewable energy when he sees how coal emissions are harming his parishioners.

"Melina" documents the work of Italian Melina Riccio, who has dedicated her life to picking up the waste that has invaded every corner of our world. "Rigged: A Workers' Story" tells the tales of United Kingdom oil workers who have found themselves out of work in the midst of the COVID-19 pandemic and the declining oil industry.

In "They Keep Quiet So We Make Noise," two activists lead the fight against the tide of plastic waste that Malaysia receives from overseas, while "Thor Heyerdahl Climate Park" shows a mission to plant 1 billion mangrove trees in Myanmar and mitigate 500 million tons of carbon dioxide. "Youth vs. Apocalypse" highlights a youth group taking to the streets to protest for climate action at San Francisco's Federal Building and City Hall.

The 10 shorts selected for this year's festival were chosen from a pool of about 200 climate action films. The makers of "EVE," along with Eve Tizard and her mother, will be part of the post-screening discussion on the first night, while the second night will feature the makers of "A Story About Bread."

The Climate Action Film Festival premiered on February 6, 2020, with the screening of nine films at Main Street Landing Performing Arts Center in Burlington. The organizers planned showings at the Marquis Theatre in Middlebury, as well as in Rhinebeck and Woodstock, N.Y., but those events were canceled at the onset of the pandemic.

According to Geudelekian, the 2021 festival was successful in its online format: Hundreds of people tuned in for the nightly livestream, and the films got a couple thousand more views in the weeks afterward. This success, combined with uncertainty about the state of the pandemic during the Delta surge, encouraged the directors to stick with a virtual format for 2022.

While it was exciting to fill the 100- to 200-person Burlington theater with viewers at the 2020 festival, Geudelekian said, he believes that the online format offers a valuable opportunity to show the films to a more diverse audience.

"People are still really enjoying streaming from home in certain ways. We can reach a lot of people with this platform," he said. Tickets to the festival provide access to both the films and the conversations with the filmmakers until March 27.

SunCommon's concern about the climate crisis, Geudelekian said, goes far beyond its work as a solar installer. "Storytelling is working well for us as a brand," he said. "[It is] a great way for us to get people to join this movement."