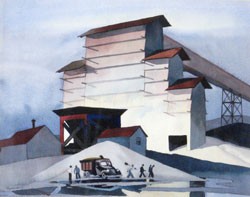 Watercolor is often referred to as an unforgiving medium. In the hands of a novice it readily dissolves into a blurry disaster, but even the most proficient watercolorists need to, as John Singer Sargent once said, “make the best of an emergency” in every piece. One issue is that you can’t effectively edit watercolors by painting over mistakes as you can with oils and acrylics. A good watercolorist needs to be not just technically astute, but fearless and confident as well.

More than 100 paintings by 10 highly accomplished artists are presented in “Masters of Vermont: The Watercolorists” at the Bryan Memorial Gallery in Jeffersonville. The earliest works in the exhibition date from the late 19th century, but most are by 20th-century artists born in the decade before World War I.

Some of the oldest pieces in the show are by Martha Wood Belcher (1844-1930). Her unassuming watercolor sketch “Italian Workers II” was painted quickly from life — a notation on the back guesses its date as “about 1898?” Belcher’s daughter, Hilda Belcher (1881-1963), became an accomplished artist in several media, studying with Robert Henri and George Bellows, among others, at the New York School of Art (now Parsons). Despite her travels, the younger Belcher called herself “a thoroughgoing Vermonter.” Her stately watercolor here, a study for “The Knitted Shawl — a portrait of Miss Peck,” is beautifully composed. Hilda Belcher has the strongest figurative pieces in this show.

The paintings of Walton Blodgett (1908-1963) have a neoclassical solidity and simplified approach to color. The tree trunks of “Snowy Woods” resemble a dense Corinthian colonnade festooned with snow. His “Mill” portrays monumental rural architecture in two-point perspective. Workers are dwarfed by the structure and its geometric surroundings.

Preconceived ideas abound regarding how watercolors, especially Vermont landscapes, should look. Robert Blair (1912-2003) broke the thin, washy mold. His watercolors are lush and extravagant with paint. “Pond and Mountains” is soaked with phthalo blue in the mountains and sky, and scumbled and scraped with darker hues in the pond. Blair was a World War II infantryman who documented the war in Europe with watercolors, and some of that rugged spontaneity appears in his peace-time works as well. In “Mansfield Late Autumn,” background brush strokes are languid and broad, while foreground colors are splashed, dotted and slashed through the trees.

Another expressionistic watercolorist is the noted Vermont artist Ronald Slayton (1910-1992). “Road Between the Cliffs” is a wet-on-wet painting based on a strong diagonal and vibrant hues. A patch of dark green in the lower right anchors the treacherous vista. “Purple Rocks” is an abstract scene of rocks and natural features enclosed in a lozenge shape. Slayton seems to play with positive and negative space at the edges of the composition.

Lucien Day (1916-2008) was a Vermonter with big-city connections who created the Green Mountain Gallery in Greenwich Village and later moved it to Soho. It was known for showing cutting-edge figurative art in a nonobjective era. “NYC 5 Views” is a 24-by-6-inch horizontal piece presenting five views of a building façade. Each bends toward the skyline.

Another unorthodox piece is Day’s 7-feet-by-40-inch “Ovals.” Two circles of trees in winter are stacked vertically in this oversized watercolor. Whether capturing the city or the woods, Day had an eye for detail that encompassed the abstract qualities of perception as well as the simple realism of sight. He received a Lifetime Achievement Award from the Vermont Arts Council shortly before his death in 2008.

While watercolor is demanding, it is also quite versatile and aesthetically rewarding. Each of the painters showcased in this show is startlingly adroit, taking the medium well beyond its humble, watery beginnings.