Not exactly Italian, but it's true. Somewhere in South Woodstock, VT, there's a herd of water buffalo, and an enterprising company is making mozzarella from their milk. According to the dairy that makes this stuff, water buffalo milk is whiter than cow's milk because it contains no carotene — the animals process the carotene directly into Vitamin A, so their milk is has a higher nutritional value. It's also thicker, more like half-and-half, and ideal stuff for making mozz balls: 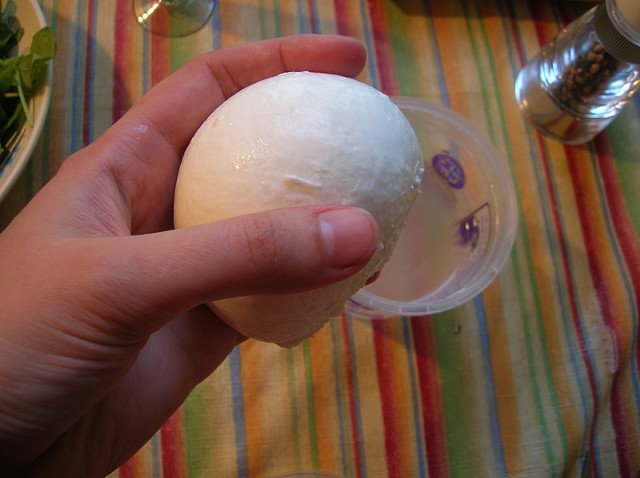 One of the fun things about the Localvore Challenge so far has been seeking out ingredients I normally wouldn't need to look for. I love fresh mozzarella on summer salads, and was happy to find this stuff in the gourmet cheese section at City Market. At $7 a container, it's probably not something I'd usually buy, but given that I made one baseball-sized lump last through six meals, I think it was worth it. It tastes mildly tangy, but not a whole lot different from mozzarella made with cow's milk. If anything, it's a bit creamier, and not as stringy as some other varieties I've sampled. There's very little salt in it, which I like — I'd rather add salt myself, especially if I'm using the mozarella with food that I've already seasoned.

I usually take some scissors and just snip the cheese on top of whatever I want to eat. Some of it ended up on the tomato-basil-garlic salad I made for dinner the other night, but my favorite dish was arugula with beets and onions pickled in vinegar, with mozzarella on top:

Our localvore potluck is tonight, and I hope to try my first cake-bake of the month: carrot-cake cupcakes, with maple cream cheese frosting. I'll substitute  either honey or maple syrup for the sugar: everything else I can get locally.

Kudos to Melissa Pasanen at The Burlington Free Press for picking up on localvores in Monday's Living section. I wonder if she's participating in the challenge, too? Her week's worth of menus sound delectable, and I appreciate how they often use leftovers from a previous meal. It's great that Vermont's largest daily is encouraging people to try eating local for the remainder of the month, even if it's just one meal a day, say, dinner.

Speaking of which, I've got to get cooking!