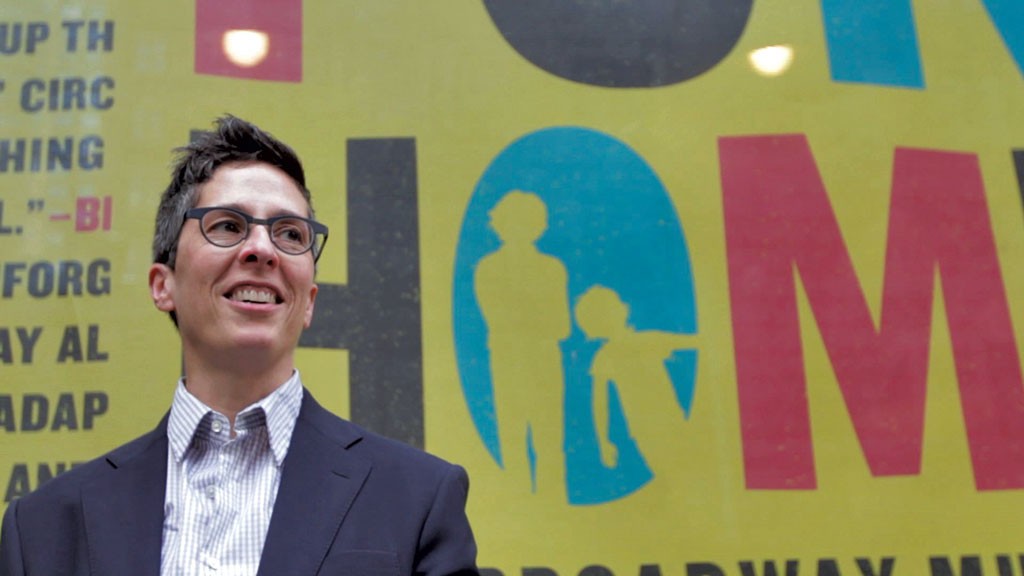 Welcome to our house on Maple Avenue, see how we polish and we shine. That's just one of the half dozen or so lyrics still swirling in my head after seeing the musical Fun Home at New York's Circle in the Square Theatre last weekend. My mental tape loop is also running "Ring of Keys" and "Days and Days" and "Telephone Wire" and "Changing My Major" — pretty much nonstop. Ranging from poignant to exuberant, these songs transform the pages of Vermont cartoonist Alison Bechdel's best-selling 2006 graphic memoir Fun Home: A Family Tragicomic into colorful, glorious life.

Both the book and the off-Broadway musical version of Fun Home won multiple awards, and the new on-Broadway version will surely do so, too. Judging from the mostly rhapsodic reviews following last Sunday's opening night in Manhattan, this is not idle speculation.

Let me back up. Last Friday I traveled to New York City with Seven Days multimedia producer Eva Sollberger. Our mission was to interview Bechdel that night before the show, which had been in previews since March 27. We also planned to catch up with young Vermont actor Oscar Williams, 11, who plays the part of Alison's little brother Christian in the Broadway production. (See Sollberger's [un-]Stuck in Vermont episode featuring those interviews at sevendaysvt.com.)

I had seen, and loved, the off-Broadway production of Fun Home at the Public Theater in late 2013, so I knew what to expect. Or so I thought. Turns out the theater-in-the-round staging and the addition of a six-piece chamber orchestra enhanced the show well beyond my expectations. And the cast, with just three changes, was even more polished.

I have nothing but raves for the musical created by Lisa Kron (book and lyrics) and Jeanine Tesori (music) and directed by Sam Gold. Bechdel's narrative is not the stuff of typical Broadway shows — a lesbian coming-out story? a closeted father? a suicide? Yet it touches on every emotion in the human repertoire, and so reaches everyone who has ever had ... a family.

Asked in the interview about her reactions to the success of Fun Home, Bechdel, now 54, said she's been amazed at the enthusiasm for the play. "I mean, it's really good, but the subject matter is dark and challenging," she said. "It's personal, intimate and idiosyncratic."

In my view, that intimacy is precisely why the story strikes a chord. You needn't have had a gay dad who killed himself to know sorrow, disappointment and the terrible pain of secrets.

All that said, Fun Home is also, well, fun. (Never mind that the title actually refers to funeral home — the Bechdel children's cheeky abbreviation for the family business.) Kron mined details from the book for her often-hilarious lyrics, and created show-stopping numbers that puncture the story's dark arc. It certainly helps to give three cute, talented kids some of the prime time. Picture the Young Alison (Sydney Lucas) and her two little brothers (Williams and Zell Steele Morrow) performing a spirited Jackson 5-style song-and-dance routine — their invented commercial for the mortuary — on and in a casket.

I haven't space here to give the rest of Fun Home's impeccable players their due. For more, read Ben Brantley's eloquent New York Times review, or see the Seven Days blog Live Culture.

As for Bechdel, the "underground lesbian cartoonist" (long described that way for her "Dykes to Watch Out For" comic strip) still seems a little shell-shocked by her good fortune — a best-selling book, an award-winning musical and a MacArthur Fellowship. Given that she spent seven years writing and drawing Fun Home, the trajectory doesn't feel meteoric, Bechdel said, but admitted, "I'm not fully inhabiting this yet. It's an amazing experience."

What's it like sharing so much of herself? "I'm not a super share-y person, but I have this exhibitionist streak," Bechdel revealed. "Also, I was Catholic and I loved confession. I don't normally speak in religious terms, but it is a kind of grace."

Fun Home, based on the graphic memoir by Alison Bechdel, directed by Sam Gold, music by Jeanine Tesori, book and lyrics by Lisa Kron, Circle in the Square, New York City.