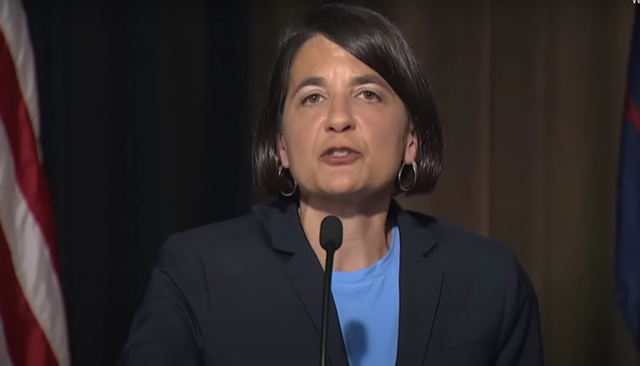 In her campaign for U.S. House, Vermont Senate President Pro Tempore Becca Balint (D-Windham) appears to be using a frowned-upon tactic known as “redboxing” to attract attention from super PACs that might throw their weight — and money — behind her.

Campaigns are not allowed to coordinate with super PACs, which can raise and spend unlimited amounts of money. But increasingly, campaigns have created sections of their websites, usually using a red box as a signal, to alert super PACs to information the campaign would like to see used in an advertisement — without directly coordinating with super PACs.

On Balint’s website, much of which uses a blue and orange color scheme that matches her campaign logo, a red button labeled “Learn More About Becca” recently appeared under the “Meet Becca” section.

Clicking on it takes users to another page called the “Campaign Media Center,” which includes professionally shot photos of Balint in action: with her wife, meeting constituents, riding her motorcycle.

“Primary voters need to hear that Becca is the candidate in this race who has delivered and been a champion for rural Vermonters on the issues that matter to them most,” an all-caps message declares.

Saying “voters need to hear” is often a signal for super PACs to run radio ads, according to a story last month in the New York Times, which describes the red-boxing tactic under the headline “The Little Red Boxes Making a Mockery of Campaign Finance Laws.”

Seven Days sent the relevant part of Balint’s webpage to the Campaign Legal Center, a Washington, D.C.-based nonpartisan nonprofit that has written about and opined on red-boxing.

“It does look like a case of redboxing to us,” a spokesperson replied, along with a statement from Erin Chlopak, the organization’s senior director for campaign finance.

“This type of coordination between campaigns and supposedly independent super PACs and outside groups exposes the inadequacy of our existing campaign finance rules, which allow those groups to raise and spend unlimited amounts to support candidates based on the premise that their campaign activities are truly independent from the candidates they support,” Chlopak wrote.

A Balint campaign spokesperson, Natalie Silver, vehemently denied using the tactic, saying language on the site is “there for people to learn more about Becca, which is the name of the page.”

“I’m being really honest with you,” Silver said in an interview. “There’s no, like, dastardly plan.” She continued: “This is information that’s all over our site. It’s all over our messaging. It's very clear what the issues are in the race … There's nothing secret about this page.”

The brazenness of the tactic is what makes it so effective — and technically legal, the Times reported.  Because the information is “publicly available internet materials,” the Federal Elections Commission has not stopped the practice or declared it illegal, despite past complaints, the newspaper reported.

Balint’s page includes her stances on housing, gun safety and mental health, and appears to take jabs at her chief rival, Lt. Gov. Molly Gray. The page notes that Balint has “voted in every election since she turned 18.” Gray, meanwhile, has admitted that she did not cast ballots in the four national elections between 2008 and 2018.

“In Vermont, a candidate’s commitment to civic engagement is paramount and Becca is proud to be the person in this race that has always taken that seriously,” Balint's page says. It also notes her track record in elected office, a seeming swipe at Gray, who first won public office in 2020 to the largely ceremonial position of lieutenant governor.

It’s unclear when the Gray campaign learned of the section of Balint’s site that is at issue; Silver said it had only gone up in the last few days. Seven Days viewed it last Friday.

The issue of super PAC spending came up during a debate cohosted by Seven Days last Thursday. During it, Gray asked Balint whether she would join her "in making two commitments: first, to publicly reject any outside group spending in this primary; and second, should any groups put up ads, join me at a joint press conference the next day denouncing them and demanding the ads be taken down?”

“No further questions,” Gray said with a smile.

In a statement, Gray campaign manager Samantha Sheehan said Balint has shown a “pattern of behavior” where she “says one thing to Vermonters, and then does another behind closed doors.” Sheehan cited Balint’s failure to follow campaign law by missing two deadlines to file financial disclosures, and her comments calling Gray a “corporatist Democrat” during the Vermont Progressive Party’s state committee meeting last month.

Silver said Balint plans to “follow through on that promise” she made at the debate.

“I don't know where they're coming from,” Silver said of the Gray campaign, “but I do know that Becca said publicly, in that debate, that she is happy to stand with Molly and denounce any kind of … super PAC spending.”

No outside groups have run advertisements to date in the campaign. But on Monday, shortly before publication of this story, Seven Days returned to the “Meet Becca” section of her campaign site. Someone had changed the color of the red button — to orange.