Waste Not: Breaking the cycle of curbside contamination 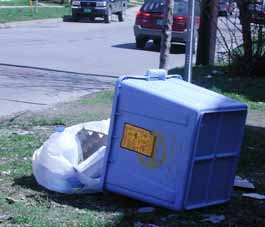 Springtime in Burlington is a thing of beauty: grass greening up, drummers in the park… and greenbelts abloom with plastic bags and bloody meat trays. Garbage always accumulates over the winter. But this spring, certain neighborhoods started looking more like Queens than Queen City. Ironically, a chief culprit in this trashy trend is the number-one darling of mom-and-pop environmentalism: curbside recycling.

The problem began back in February or March, when Burlington recycling drivers started leaving some blue boxes untouched at the curb; a box here, a box there, sometimes even skipping entire blocks. The drivers had been warned that they were allowing too many non-recyclable items into their loads. But in their eagerness to solve one problem, they inadvertently created another. As the rejected boxes stayed by the curb, the stuff inside them started spilling out and blowing around. Pretty soon, the streets looked like slums. Phones at the Burlington Department of Public Works and the Chittenden Solid Waste District started ringing off the hook.

Finally, in mid-April, Peter Clavelle took notice and issued a mayoral directive to the guys the city pays to empty blue boxes: Go back to emptying blue boxes.

Burlington’s environmental snafu is an indicator of more widespread rethinking about recycling. As worldwide markets for reused materials decline and the cost of recycling rises, cities are reassessing their programs. Seattle, San Francisco and Los Angeles have adopted pay-as-you-throw policies that reward responsible refuse management. And in New York City, mayor Michael Bloomberg has proposed a controversial 18-month moratorium on recycling glass, plastic and aluminum — a move that would take a $57 million bite out of the Big Apple’s $4.76 billion deficit.

No one wants to talk about the cost-effectiveness of recycling. In New York, recycling plastic, glass and metal containers reportedly costs twice as much as landfilling the stuff. Here in Vermont, according to Chitten-den Solid Waste District manager Tom Moreau, reusing glass saves only 5 percent of the energy required to make it from scratch. Municipalities have been willing to absorb the cost as long as budgets permitted. As Jerry Taylor of the libertarian Cato Institute has observed, recycling is the ultimate feel-good chore, a daily ritual in which we atone for our planetary sins by rinsing glass and sorting plastics. But when the system breaks down, as it did here this spring, the rite loses its cleansing power.

Here’s how recycling is supposed to work in Burlington: You squeeze out the last of your ketchup, rinse the bottle, and toss it in your blue box. On recycling day, the city truck comes by and the driver sorts your stuff, leaving behind anything that’s not on the list of acceptable materials, along with a day-glo green sticker explaining why.

While you’re saying your Hail Marys and vowing to do better, the recyclables arrive at the Ma-terials Recovery Facility (MRF) in Williston, where workers make sure its contents fall within acceptable contamination limits: not too much garbage mixed in with the recyclables, and not too much of the wrong kinds of cardboard or plastic. After being sorted and cleaned, the collected materials are sold to manufacturers on the open market. Half the proceeds go to Casella Waste, the private company that runs the MRF, and half to the Chittenden Solid Waste District, the regional entity for whom Casella works.

Once they’ve been sold, the recyclables you so diligently sorted into your blue bin are miraculously reborn — maybe even to return to your life transformed: your former spaghetti box in the packaging around that new DVD player; your empty conditioner bottle as part of a lawn chair; your old can of Campbell’s soup in the wing of an airplane taking you to Oahu.

The system can absorb a few glitches. But in Burlington this spring, too many things went wrong. Residents were throwing the wrong stuff in their blue boxes. Recycling professionals were looking the other way. And international market conditions were deteriorating.

One common setting for recycling wrongs is in your own kitchen, where you’re preparing to toss your empty yogurt carton but can’t decide between the blue box and the trash bin. You want to be good. But the rules have been changing so fast lately; who knows what to do? Don’t feel bad. Even Jane Knodell, a long-time Burlington City Councilor, is puzzled. “As an individual household, we have incredible confusion about what they’re picking up,” she admits. “They’ll take something one week and not the next week.”

If plugged-in citizens feel uninformed, how can newcomers — students, say — be expected to know what’s what? UVM provides students living off-campus with good-neighbor booklets that include recycling tips. But the brochure doesn’t spell out specific rules, because they change so often.

Of course, some people probably wouldn’t follow the rules even if they were as clear as properly rinsed glass. Kathleen Butler gets an eyeful of this as part of her work for the city’s Board of Health. Her finds? “Not pizza boxes. Pizza. Not the wrong kind of cardboard, but every kind of food. In some cases, it’s totally like this is just another garbage pail for them,” she says.

And the culprits are not just students. “There’s a lot of gross stuff in those boxes. During deer season, people leave deer parts,” says City Councilor Jean O’Sullivan, who represents the New North End.

Inconsistent enforcement by drivers adds to everyone’s puzzlement. It also reveals a level of confusion on the part of the drivers themselves — a situation largely brought on by an unusually high rate of employee turnover. “We were seeing new drivers every day,” reports Jay Maceyka, Casella’s top honcho at the MRF. In some cases, he claims, his workers had to teach the Burlington crew to do their job.

But the lessons didn’t seem to stick. And rather than reinforce them, the MRF backed off. “I’m guilty,” confesses Maceyka. “I had a heart.” Instead of fining the city for contaminated loads, “I told the guys out back to cut them some slack,” he says.

The trouble with slack, of course, is that if you cut too much, something inevitably slips — like the MRF’s returns on recyclables. In times when prices are high, buyers tend to be less stringent about contaminants, Moreau explains. “When prices are low, brokers get pickier.”

“Markets right now are not the best in the world, and they haven’t been for the last two years,” comments Macyka. “It’s a hustle.”

Demand for glass has been dropping for some time, as companies like Heinz and Coca-Cola have been shifting from glass to plastic containers. At the same time, the cost of processing recycled glass has been going up, especially around here, as glass mills have been consolidating, shutting facilities in areas with low population density.

Other markets are doing better. Worldwide prices for recycled cardboard jumped from $35 to $45 a ton on April 1, a reaction to China’s suddenly insatiable hunger for cardboard — presumably for packaging in which to ship its expanding electronics exports. And after two years of sagging prices, Bush’s steel tariffs have goosed up the value of recycled soup cans.

The best way to ride out these ebbs and flows is to produce a consistent product — that is, recycled materials with very few impurities. Casella’s contract stipulates that the commodities it sells will contain no more than 5 percent contamination. To keep within that limit, Casella isn’t supposed to accept loads that are more than 2 percent tainted. Exceeding the limit triggers fines. Unsalvageable loads get diverted to the transfer station for eventual landfilling.

Assessing contamination is not a science. “It’s an eye thing,” says Maceyka. “You have to have been doing the job for a while to gauge what’s 2 percent. If you come in with a load that’s straight plastic but you’ve got a load of five-gallon buckets, it doesn’t take a rocket scientist to know that it’s contaminated.”

Burlington used to be a model recycling city, according to Maceyka, who has been at the MRF since 1997. “I used to show their loads to Casella employees.” But now, “They have their good days and their bad days,” he adds. Because of its previous stellar reputation, when the city’s loads slipped to merely average, the MRF held back on fines. But when weeks passed and loads didn’t get cleaner, Maceyka decided it was time to clamp down. “We gave them no warning,” he admits.

This sudden scolding stunned the DPW. “We would have liked to have had a grace period to have some time to get our feet on the ground,” complains director Steve Goodkind. But no: “It was just, ‘This is the riot act.’” Freaked out at the specter of rejected loads, the city turned around and came down hard on residents, who were as ill-prepared for the change as the drivers themselves had been. As Goodkind puts it, “We went back and tried to follow the rules. It hasn’t been done this strictly for a long time.”

If ever. “The rules” don’t exactly stipulate that one unacceptable item disqualifies the whole box. But that’s how drivers interpreted them. “It’s very difficult for drivers to go through every box,” Goodkind argues. “If they see a box that’s contaminated, they just leave it there with a sticker. For us it’s a real pain to figure this out.”

Overzealous enforcement might make for cleaner loads, but it’s “not exactly the most adept public relations move,” says O’Sullivan.

Clavelle, who understands constituents need to be kept happy, concurs. “We have to keep a friendly face on recycling. Education has to be part of our effort.” Burlington residents will find literature spelling out the most current recycling policies in their May electric bills.

For now, Clavelle suggests, “Everyone needs to step back, take a deep breath, and not set standards that are impossible to meet.”

Meanwhile, back in your own kitchen, what to do with that empty yogurt carton? Toss it. Because of shrinking markets in plastics recycling, the district stopped accepting “wide-neck” plastic containers in 2000. That means no more guilt-free margarine, sour cream or Cool Whip. Next time you yearn for the tang of acidophilus, you can always do what Kathleen Butler did: “I bought a yogurt maker.”