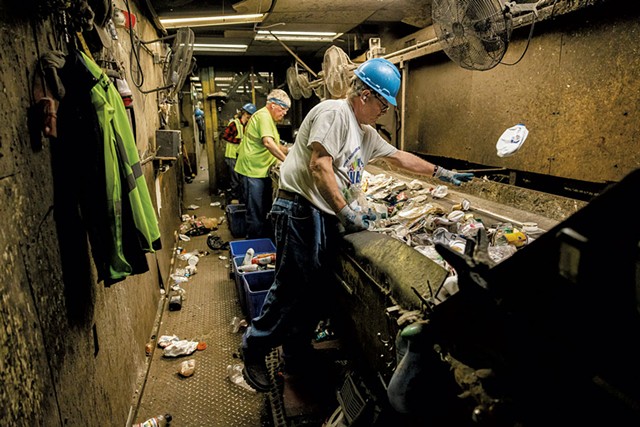 The paper, plastic, glass and metal that most Vermonters chuck into their blue bins gets trucked to a dark, windowless metal building in Williston, dumped on a concrete floor and fed into a dirty, dystopian Rube Goldberg-like machine.

Workers toil over speeding conveyor belts to pick through the endless stream of yogurt cups, soup cans and drink bottles. They identify and toss each type of material into a chute that carries it to the appropriate bunker below.

The contents are then pressed into huge cubes, bound with wire and shipped off to national and international markets to be recycled into new products.

The Chittenden Solid Waste District's Materials Recovery Facility has been operating for nearly 30 years. Waste officials say it's well past time to build a new one.

"We are bursting at the seams," said Jen Holliday, the district's director of public policy and communications.

The 35,000-square-foot building, constructed in 1993, is operating at nearly double its design capacity, processing 47,000 tons of material per year in a space designed to handle 25,000 tons.

The facility is too small to accommodate the kind of cutting-edge sorting machines that would improve the amount and quality of resell-worthy material. There's not enough space to store those items properly; some bales get stacked outside in the elements. And the cramped, loud, dark and dusty conditions make it hard to find workers who are willing to literally pick through people's garbage, Holliday said.

So the district is asking Chittenden County voters for approval to borrow $22 million to build a new, state-of-the-art recycling facility on Redmond Road, two miles to the east.

In eco-conscious Vermont, which has one of the highest recycling rates in the nation, the question of whether to approve a tax-free proposal to expand a vital recycling facility's capacity by 40 percent might seem likely to prompt an easy answer. But two factors make it far from certain that voters will green-light a plan to modernize the out-of-date, inefficient recycling operation.

In 2018, the district got caught up in a glass-dumping scandal.

The case, which involved workers discarding ground-up glass that people assumed was being recycled, subjected the district to state sanction and withering public criticism. The matter was resolved in a $400,000 settlement two years ago.

Whether the public will support the district so soon after a highly public flogging is "an open question," said Paul Burns, executive director of the Vermont Public Interest Research Group, the state's largest environmental organization, which backs the measure.

The other question is if Chittenden County voters will bother weighing in, given that special election ballots — unlike the general election ones — will not be automatically mailed to them. Those voting by mail must contact their town clerk to get a ballot, though people who vote in person will receive one.

"I'm very concerned about the confusion issue," Paul Ruess, chair of the district board, said in August.

"It's a mess," agreed board vice chair Alan Nye.

The ballot mess is nothing compared to what lies at the end of Avenue C in Williston, however.

"We are bursting at the seams." Jen Holliday tweet this

The current sorting facility, near Industrial Avenue just east of the airport, is a chaotic and downright dangerous place. Although the building is owned by the solid waste district, it is operated under a contract with Casella Waste Systems, the region's dominant waste hauler.

Seconds into a recent tour of the aging facility, a series of explosive sounds erupted from the concrete pad where trucks tip their loads. A bucket loader scooping recyclable material onto a conveyor belt had driven over bottles that had tumbled out of a truck from Hyde Park. The sealed bottles popped under the machine's massive wheels, setting off what sounded like cannon fire and adding to the din.

Nearby bales stacked atop one another created a makeshift retaining wall to keep the mountain of material from spilling onto other work areas.

And broken glass rained down from the sorting machines, pelting surprised visitors, littering the staircases and floors, and crunching underfoot as Led Zeppelin wailed from speakers overhead.

"This is not the way to do it," Holliday said, referring to the facility's inefficient glass-recycling operation.

The new Materials Recovery Facility would bring the glass-grinding process fully indoors from the weather. It would also expand storage so that material could be kept dry and managed more efficiently, she said. The larger facility, at about 65,000 square feet, would also dramatically improve the district's ability to automate the sorting process, Holliday said.

Optical sorting technology would allow a combination of infrared sensors and cameras to quickly identify the types of material racing down the conveyor belt, she explained. Precisely timed puffs of air would then send specific products — like office paper — sailing into separate bins.

The ability to separate types and even colors of paper can significantly increase the quality and value of the bales the district creates and sells, she said. Demand for quality recycled paper and cardboard is particularly high right now, as people continue to purchase more products online.

By comparison, she pointed to two huge chutes out of which shot all manner of paper packaging, junk mail, newsprint and cardboard into a single heap on the concrete floor.

"Right now, it's all mechanical, and you get what you get," she said.

For optical scanners to work properly, material must be spread in a thin layer. That requires more space, something that is currently in short supply.

"If we could have put an optical sorting line in, we would have done it years ago," Holliday said. "We can't."

The new equipment the district has chosen, from a supplier in Norwalk, Conn., called Van Dyk Recycling Solutions, would include seven optical scanners. 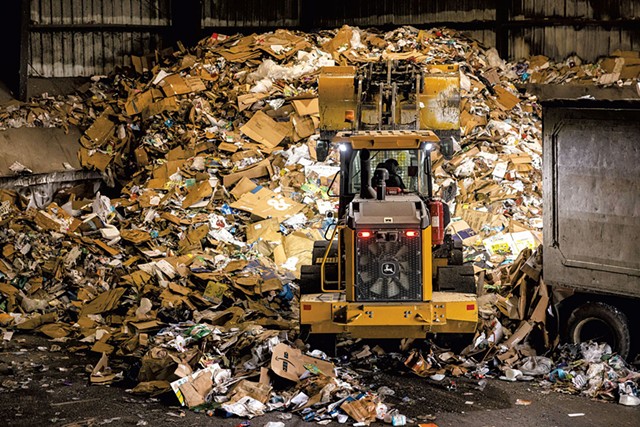 While that may sound futuristic, it's really not, Michele Morris, the district's director of communications, told the board in September.

"These two features are standard technology in any 21st-century [recycling facility]," she told the board. "They are not far out on the bleeding edge."

The upgrade would add a second baler, which she called "the heartbeat of the facility." It currently has only one.

"If that goes down, we're dead in the water," Morris said.

The increased automation is expected to improve the amount and quality of the bales produced by the new facility, but it would not reduce the need for the roughly 21 workers there, and no jobs would be lost, officials said. The district has considered operating the new facility itself, instead of contracting with Casella, but no decision has been made, Holliday said.

The district generates revenue from disposal fees and material sales, which would help pay for the bond. But in the time it has been planning the new facility, the price tag has increased; the projected cost of construction has soared.

What was originally estimated to cost $12 million to $15 million has risen to $26 million. The district needs voter approval because it plans to borrow $22 million of that, along with $3.5 million from reserves. The hope is that grant funding can make up the balance.

Voters in Chittenden County tend to support expansion of recycling efforts, but the lingering memory of the glass-dumping case may give some pause. District officials damaged their credibility not just by the way they disposed of the ground glass but also by failing to admit fault for skirting environmental regulations, Burns of VPIRG said.

"It is difficult to regain full credibility without ever admitting the wrong and without taking responsibility," he said.

Unlike glass beverage bottles that are returned for their 5-cent deposit and recycled separately, the glass that people throw into blue bins, such as spaghetti sauce jars, is of lower quality because it often has food stuck to it.

The district used 2,186 tons of such glass "to repair a depression in the closed landfill" in 2013, according to its settlement with the state Agency of Natural Resources, which investigated the case.

It dumped another 15,029 tons of glass over an embankment at the end of Redmond Road between 2016 and 2018. And it spread 734 tons as a subbase at the district's Green Mountain Compost operation.

The district did all of this without permits. It claimed it did not need permission, but state regulators ruled that it did.

The settlement with the attorney general required the district to pay a $78,000 penalty, fork over nearly $180,000 more to the state and spend $220,000 on environmental projects intended to benefit the public.

The settlement did not require the district to admit wrongdoing, however.

After examining the proposal in detail, however, VPIRG has encouraged its members to vote yes despite the district's past transgressions.

"I do believe they have a legitimate case that newer, better technology could improve the future facility and therefore the products that are coming out of it can be put to a higher and better use and have a greater value," Burns said.

The organization had voiced concern that once the district got approval for a new facility, it would oppose a future expansion of the state's separate — and, in some ways, competing — bottle redemption program, where beverage containers are returned for a deposit. VPIRG hopes the program can be broadened to include more types of containers, such as glass wine bottles and plastic water bottles, and wanted assurances that diverting more of those containers from the facility wouldn't harm its long-term viability, Burns said.

Waste officials say they now support expansion of the bottle bill because it would remove more glass from the recycling stream.

Their next challenge: getting out the vote despite the mail-in ballot issue.

In 2020, during the height of the pandemic, lawmakers voted to mail all active registered voters a general election ballot. Last year, citing the sharp increase in voter participation, they made the practice permanent. But it turns out that solid waste districts are not on the list of municipalities that are allowed to mail ballots to voters.

"I was stunned when I heard that from the staff at the Secretary of State's Office," Holliday said.

As a result, neither the state nor the district sent Chittenden County voters a ballot on the bond issue. Voters must call their town clerk to ask for the ballot, request one from the My Voter Page on the secretary of state's website or vote in person on November 8.

The conundrum has forced the district to work harder to boost participation. It has sent out mailers and given countless presentations to selectboards, rotary clubs, senior centers and other groups, hoping to make its case for the need for a new facility.

As of last week, just 1,058 Burlington voters had requested the special ballots, out of 22,853 active registered voters. That's less than 5 percent.

The original print version of this article was headlined "Waste Land | A recycling center in Williston is past its prime. Will voters green-light a new one?"