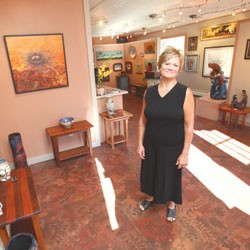 In the days after Tropical Storm Irene swept through Vermont, artist Liza Myers thought her gallery, Liza Myers Gallery, in downtown Brandon had been spared. At the time, she was in New Mexico leading Castleton State College students in a semesterlong cultural-immersion program, so she relied on photos and updates from her husband, Jim Germond. But he didn’t share the full extent of the damage to the gallery. In September, Myers wrote on her blog, “Miraculously, our interior damage was minor. Only an inch or so got in through the side door. I think we should rename our gallery The Ark.”

Unfortunately, Myers returned to Brandon last week to find the situation much worse than she had anticipated. She and Germond — who ran James Frames from the building — have decided to close the 8-year-old gallery.

“It’s a mess,” says Myers. Her initial assessment was correct: The inside of the gallery was largely unharmed. But the water washed away huge chunks of land around the building’s foundation, leaving a “five-foot drop” from the back door to the parking lot. “It’s literally walking the plank to get in and out,” she says.

Myers and Germond, who own the building, did not have flood insurance. They have received some money from the Brandon Area Chamber of Commerce’s Brand-Aid Fund, but Myers says it’s not enough to cover repairs. That’s why the couple are now renting the top floor of the building — which is still accessible — to the Vermont Sandwich Company, another Center Street business washed out during Irene.

Even in a town as art friendly as Brandon, running a gallery is risky business, Myers says. She can usually count on fall-foliage crowds for a financial boost, but not this year. “We lost peeper season,” she says. “People would walk right past us to look at the chasm” that was once a small park adjacent to the gallery.

Myers and her husband are looking into rebuilding, but in the meantime they’re pretty discouraged. “I don’t know what I can afford,” she says. Before she left for New Mexico, and before Irene, Myers gave up her studio in Brandon’s Granary artist cooperative. She had planned to move back into the basement of her Center Street gallery, which she and Germond had been using for storage and framing. “It was a dream,” says Myers. “And it was working.”

Now she doesn’t know where to go. “I have no place to paint,” she says, “no place to do my work.”