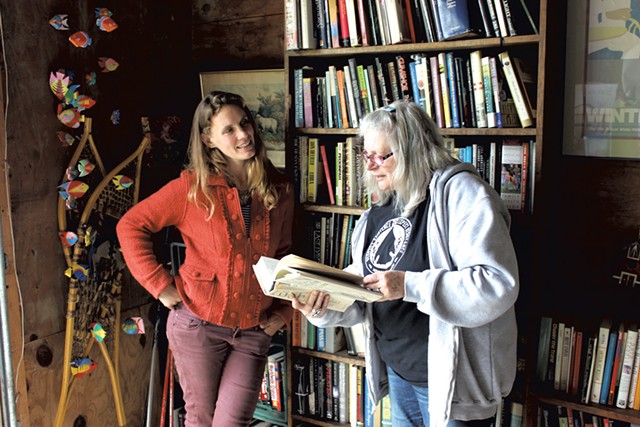 The late singer Warren Zevon was not just a revered songwriter; he was also a prolific bibliophile. Over his lifetime, the "Werewolves of London" singer amassed a collection of books numbering in the thousands. Now, nearly 14 years after his death at age 56 in September 2003, Zevon's entire library is for sale. For the time being, though, fans looking for a literary piece of Zevon ephemera will have to travel. Unless they live in Vermont.

Zevon's collection rests in the care of his ex-wife, Crystal Zevon, and their daughter, Ariel Zevon, at Brookview R&R in West Barnet. Select titles are available on eBay, and the rest are being catalogued for online sale, but for the moment, anyone wishing to peruse Zevon's voluminous stacks will have to trek to a barn in the Caledonia County hamlet. While the majority of the collection is in boxes, a small but intriguing cross-section of titles are on display. It's worth the trip.

"Warren read everything," said Crystal, 67, during a recent visit to the barn.

Zevon's collection reveals an astonishing range of interests, from philosophy and poetry to pulpy crime fiction and horror. Some books by his favorite writers, such as Graham Greene and Ross Macdonald, are inscribed with personal messages from the authors. For example, Zevon's copy of Time Bomb by Jonathan Kellerman includes the following note, dated February 1992: "To Warren Zevon, with friendship and admiration, Jonathan Kellerman."

The collection contains numerous tomes by the musician's writer friends, such as — Carrie fans, take note — his pal Stephen King. "I'm pretty sure Warren had every edition of almost every book Steve wrote," said Crystal.

Aside from his famed solo endeavors, Zevon was an honorary member of the Rock Bottom Remainders, King's rock band with fellow bazillion-selling writers Dave Barry, Amy Tan, Cynthia Heimel, Mitch Albom and others. King dedicated his 2013 novel Doctor Sleep — a sequel to The Shining — to Zevon. "Warren, this howl is for you, wherever you are. I miss you, buddy," he wrote.

"You know how writers always want to be rock stars?" said Crystal. "Well, I think Warren just wanted to be a novelist."

Her late husband's literary aspirations were never quite realized. But his passion as a collector was matchless, at least as rock stars go. So why sell?

"We've had these books for years and lived in numerous places, carted them across the country," Crystal explained. While the books have become an encumbrance, she suggested, she's also aware that they're part of Zevon's legacy. "They've been meaningful to us for years. But they might be meaningful to others, too."

Of course, the Zevons' motives are as pragmatic as they are altruistic.

Ariel and Crystal purchased Brookview earlier this year and are developing the property as a multiuse retreat. It's meant to be equal parts community center and sanctuary, a place where groups and artists can gather to foster creativity and support. The retreat works on a pay-what-you-can model. Unfortunately, utility companies don't.

"We still have to keep the lights on," Crystal pointed out.

Proceeds from the sale of the books will go to maintaining and upgrading Brookview. So do earnings from the flea market the Zevons hold in the barn each Sunday.

How much will a Warren Zevon-owned copy of The Hobbit set you back? That's up to you. Like a Brookview stay and the items at the flea market, the books don't come with a price tag.

"People get really confused when they ask what things cost and we tell them, 'Well, what do you think is fair?'" said Ariel, 41. "It's uncomfortable for people."

She explained that the pricing model, or lack thereof, reflects a larger ideology shared by another of her projects called Free Food for All. That's an agricultural movement in which farmers grow food not to sell but to share. Previously, Ariel ran LACE (Local Agricultural Community Exchange), a now-defunct nonprofit in Barre that provided sustainable food to underserved local communities.

"We're trying to get out of the mind-set that everything is value-based on the dollar," she said. "The value of the books, to me, is that they be seen and felt and experienced. It's not in how much we get for them."

While the Zevons are grateful to share Warren's collection — and perhaps relieved to be unburdened of it — they both express a sense of loss in letting go.

"I moved all of these books from my father's apartment when he died and took them everywhere I lived with the goal of reading all of them," said Ariel. While she didn't quite make it through every book, "They have tactile meaning for me."

"Every time I pull a book from the shelves, it has some meaning, some memory attached," said Crystal. She pointed to a dog-eared copy of Technicians of the Sacred: A Range of Poetries From Africa, America, Asia, Europe and Oceania, compiled by Jerome Rothenberg. "When Warren first moved in with me," she recalled, "this was the only book he owned."

Correction, June 21, 2017: An earlier version of this story misstated the county in which West Barnet is located; the town is in Caledonia County. This story has also been updated to clarify that the majority of the collection is in boxes, not on display.

The original print version of this article was headlined "Books Awoooo! Warren Zevon's Library Is for Sale"