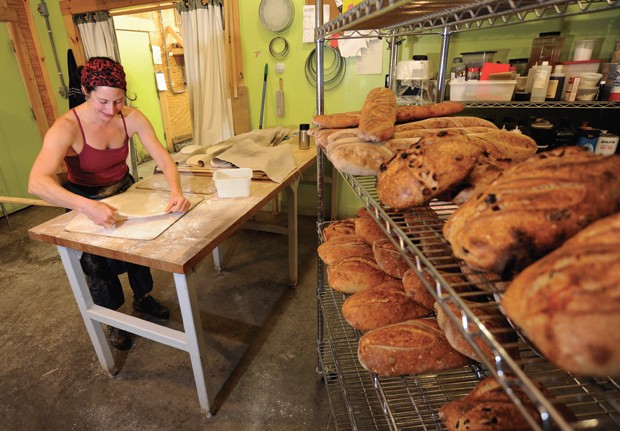 Fermented foods are hot right now. From kimchi to tempeh to cheese, healthy bacteria work their magic on the Vermont culinary scene. It’s a health-focused trend that Suzanne Slomin is eager to ride. The equally popular trend she’s not so happy about? Wheat avoidance.

“It’s almost like a conspiracy theory,” says the Warren baker, who produces an often-overlooked brand of fermented food: naturally leavened bread. We’ve all eaten our share of sourdough, but Slomin’s process of letting her dough rise slowly in the cold lets the enzymes and bacteria that enrich it thrive. Soon she hopes to showcase her uncommon loaves at her own bakery.

Slomin is quick to point out that cultures from South America to Asia have fermented grains such as corn and rice for millennia. Eating unfermented grains is comparatively new to humanity.

And, notes the baker, who currently works out of Kingsbury Market Garden, lactobacilli have reconciled some wheat-avoidant folks to bread. Slomin says several of her customers (including one who trades facials for loaves) used to think they were gluten sensitive. It turned out they just couldn’t tolerate the unfermented wheat in commercial, yeasted bread.

History lesson aside, the only gospel Slomin really wants to spread is that of delicious bread. She’s doing it all over the Mad River Valley. Under the name Kingsbury Market Garden Bakery, her loaves are sold at the Bridge Street Butchery in Waitsfield, Wood’s Market Garden in Brandon, and East Warren Community Market and Co-op. That last market also offers Slomin’s pizza, as does Yestermorrow Design/Build School. Hostel Tevere and Timbers Restaurant at Sugarbush Resort serve the tangy loaves to their guests. Even farm-share holders in Canton, Mass., get a taste each week through Pakeen Farm’s CSA.

Slomin’s bread is quickly winning fans, but it needs a permanent home. Last year, she and her husband, Aaron Locker — with whom she came to Vermont in 2007 — divorced and closed their farm store and bakery. No longer does Kingsbury Market Garden offer locavore sandwiches, fresh fruit tarts and produce-stacked pizzas.

But Slomin hasn’t stopped producing her French-style levain loaves there. For now, her wholesale business retains the Kingsbury name, and her high-powered Wachtel oven remains in the farm store’s kitchen. This spring, she’ll break ground on her Waitsfield property for a bakery of her own, Green Rabbit Bakery. Slomin hopes to move the entire operation to her pear-tree-dotted homestead by the summer.

Green Rabbit, also the name of the farm she and Locker once shared in Madison, N.Y., is a phrase that goes back to a dream Slomin had as a child. “It just kind of etched itself in my mind,” says the petite baker, whose voice recalls that of singer Kristin Chenoweth. When she grew up to study at the French Culinary Institute and work in kitchens, Slomin hoped one day she’d open a café called the Green Rabbit.

The now-43-year-old got her start in bread baking nearly 20 years ago, when she was running a kitchen in the East Village and decided to take a week off for a bread intensive at FCI. It ignited her passion for the ancient science of bread baking.

Slomin left the city for upstate New York, where she purchased a bakery setup from a retired bread maker and got to work. Luckily for the flock of sheep she kept at the time, she still had a lot to learn. The hungry ewes sampled many a batch discarded for its density or overfermentation.

Within a year, Slomin was selling loaves along with her farm’s veggies, but her experiments left her hungry to perfect the craft. She traveled the country learning at some of its best bakeries, such as Massachusetts’ Berkshire Mountain Bakery. There, Slomin consulted with Richard Bourdon, whom she calls “a mad scientist, obsessed with fermentation.” A connection at Berkshire helped her land a spot at Tartine Bakery & Café in San Francisco’s Mission district.

And she just kept learning, a rare woman in the male-dominated bread-baking field. “Even if I sat on a flour bag and was able to pick people’s brains, it was worth it,” Slomin recalls. “There were just some certain problems I would run into. I didn’t know what the problems were specifically, but somebody who had a lot more experience was able to identify or make suggestions. Then I just kept baking.”

All the while, Slomin’s starter traveled with her. She figured she’d have an easier time feeding it herself than making friends do it. “Everyone is afraid they’re going to kill it,” she says with a shrug.

Incidentally, Slomin notes, they shouldn’t have worried. “It takes a lot of neglect to really kill a starter,” she says. “Unless it’s completely black and liquid.”

Her 13-year-old starter bears traces of cultures from the bakeries she’s traveled to, but Slomin pooh-poohs the idea that these alter her bread’s character. “That’s definitely an urban myth. It really doesn’t matter where your starter comes from,” she says, explaining that her bacteria’s last few weeks of history are all you’re likely to taste.

Slomin also isn’t superstitious about the characteristics of any individual starter. “If anybody comes to me and says, ‘Can I have a little starter?’ it’s not like, Ooh, no, that’s my starter!” she says, measuring out dough for the next day’s bake.

What separates Slomin’s bread from other naturally leavened loaves is her time-intensive process. While most bakeries allow their dough to rise for about six hours in 78-to-100-degree heat, Slomin gives her loaves 18 hours to proof in a chilly 48-degree room.

Coupled with her steamy oven (a step up from the Blodgett-pizza-oven-and-garden-hose combo she used to keep her bread moist in New York), this method produces a truly uncommon loaf. The puckery interior is as ethereally fluffy as those of breads from other Vermont artisan bakeries such as Gérard’s Breads of Tradition of Westford or Bohemian Bread of East Calais. But while those breads have thick, crackly crusts, Slomin’s crust is thin and chewy.

And it stays that way. Crustier breads can become useless for anything but breadcrumbs in just a few days. Slomin says that cooking her bread (including pizza dough) at 75 percent hydration keeps it fresh enough to eat for a week. If she’s keeping a loaf longer than that, she’ll freeze it, which she says the breads withstand uncommonly well, as long as they’re removed from their plastic before thawing.

Slomin’s classic levain dough is the base for a slew of creative combinations, as she lets her inner savory chef run wild. One customer’s son had his mother stick candles in one of Slomin’s Monterey Jack and chive loaves for his sixth birthday. One can only imagine the looks on his guests’ faces.

Baguettes stuffed with caramelized onion, black pepper and Reggianito are equally worthy of a celebration (though perhaps too thin to accommodate candles). Depending on what’s growing in her garden throughout the season, Slomin might load other loaves with garlic scapes, potatoes or shallots.

Her sweeter breads are subtly so, moistened by chunks of ultra-dark chocolate or speckled with cinnamon and raisins for a loaf that Slomin calls “25 percent fruit. It’s almost like raisins with dough.”

For now, Slomin relies mostly on midwestern wheat and rye for her breads, supplemented by grains from Meunerie Milanaise in Québec. She says the quality of regional grains she’s used has been too unpredictable for her purposes, often exhibiting a too-high protein content. Soon she hopes to include more whole-wheat offerings in her repertoire, including breads filled with soaked flaxseeds and sunflower seeds.

Just don’t expect her to go gluten free. Slomin says she doesn’t discount celiac disease as a real condition, but she believes some people who consider themselves gluten sensitive may just be eating the wrong bread. “Often people will go out and order egg salad on wheat bread, but unless that bread has been fermented, all the minerals and micronutrients aren’t available to them, because the phytic acid prevents the body from absorbing them,” she explains.

Even she, Slomin says, doesn’t “feel great” after eating a sandwich on a big white roll. Her glutinous, chewy breads are a different matter, and she’ll keep making them as long as she feels fine, she says.

“I’m still amazed every morning when the bread comes out of the oven. It’s just magic to me: flour, salt, water,” Slomin continues. “When I used to cook or farm, everything just became drudgery after a while. But I’m still amazed at this product every day.”

That alchemy continues to wow her customers, too.