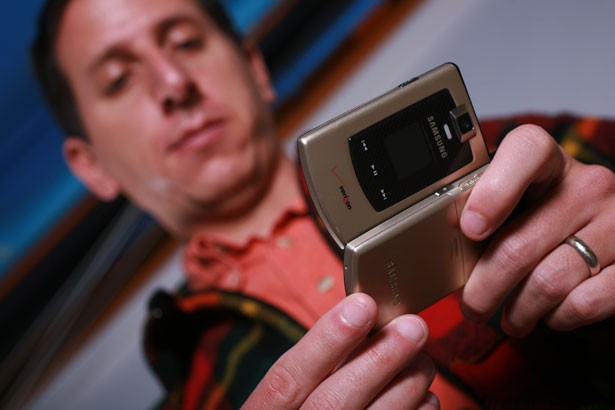 How do you stay in touch with your friends? Seems like everyone uses the Internet these days - to send email, share photos and send messages on social-networking sites such as MySpace or Facebook.

But how do you get online if you don't have a computer? All it takes is a cellphone. And a service like MocoSpace - whose website is designed to fit a cellphone screen - where you can update your user profile, post to a blog, find friends, send messages, or share photos or videos. MocoSpace.com is a lot like MySpace, but smaller. And like a lot of Vermont tech companies, this one does business - and has multiple offices - outside the state.

MocoSpace is one of a growing number of companies that cater to people who use cellphones to access the web. With two million members generating a billion page views a month, it's one of the largest mobile sites in North America.

The mobile web market in the U.S. is still relatively small - especially here in Vermont - but it's growing. A CTIA-Wireless study last November found that nearly 250 million Americans now subscribe to cellphone service. That's about 82 percent of the population. And the Pew Internet and American Life Project released a report earlier this month showing that mobile web use is on the rise, especially among African-Americans and Latinos, and among low-income users who don't have access to computers. Sixty-one percent of cellphone users who make less than $30,000 a year use "non-voice data applications" - i.e., cameras and text messaging - on their phones.

MocoSpace co-founder and CEO Justin Siegel, who lives and works from his home in Vermont, says that's basically the MocoSpace demographic. Siegel knows one homeless man in Boston who regularly posts photos to the site.

"There are millions of people in this country who don't have access to PCs or a broadband connection," he says. "They don't have a computer - but they do have a camera phone."

The earnest 36-year-old entrepreneur sounds more like an activist than a businessman when he declares, "MocoSpace is about trying to democratize the Internet a little bit."

The tools MocoSpace is spreading to the masses are standard social networking fare. Users create an account, input some basic personal info, upload photos, and find "friends" online whom they may or may not already know. They interact with their friends by rating them (from 1 to 10) and leaving comments on their profiles. They can also instant-message each other or talk in chat rooms.

According to Siegel, the biggest uses of the site are "finding friends, dating and flirting," and MocoSpace is designed with that in mind. Click on "find friends" and you can search for "girls online" or "guys online." Or you can click "near me." Members from Burlington will find about 98 others nearby, including cootdog, bad_boyz32, angelblueeyes, and babimomma802. To put that online community in perspective, there are more than 40,000 users in the Burlington, Vermont, Facebook network.

Economy of expression is even more important on MocoSpace than on other social networking sites, because most people are using a phone keypad to type. So most messages are in shorthand.

Take Babimomma802's profile, for example. She identifies herself as a 20-year-old female. Beneath her photo, she offers this advice: "Neva believe wut u hur unless u kno 4 sho or trust:-P"

Translation: "Never believe what you hear unless you know for sure or trust." The punctuation is a smiley face sticking out its tongue.

Messages like these may sound frivolous, but Siegel argues otherwise. He says MocoSpace is a lifeline for some members, particularly single mothers.

He recalls a woman who had been an active member for months who was suddenly saying goodbye to all of her MocoSpace friends. Siegel noticed, and contacted her to find out why. Turns out she couldn't pay her cellphone bill.

"We found out that her cellphone, and MocoSpace specifically, is her only connection to the outside world," he says. So MocoSpace paid her bill. Now each week they pay phone bills for 10 members.

But altruism isn't Siegel's only motivation - there's money in mobile, too. MocoSpace has garnered $7 million in venture-capital funding in the past few years, and has a total of 25 employees working out of offices in Boston and Israel.

The free service is supported by text ads for ringtones, BlackBerries and psychic hotlines. Siegel won't say how much money the company is making, but he will say they're generating "several million dollars" in annual revenue.

Siegel is definitely onto something, according to Ann DeMarle, director of the Emergent Media Center at Champlain College. She notes that cellphones have long been used for non-voice applications overseas, something that's finally catching on in the U.S. "It's definitely where we're going," she says. "It's a big, wide-open space right now."

DeMarle points out that businesses in the U.S. are just beginning to perfect mobile web applications. It's challenging to develop web services for cellphones, because there are many different carriers and kinds of phones. "It's kind of where we were on the Internet 10 years ago," she says.

So Siegel is a technological pioneer of sorts, albeit a somewhat unconventional one. The New York City native studied sociology at the University of Massachusetts at Amherst and earned a Master's degree in French literature. He was teaching French to middle-schoolers until 2000, when his childhood friend Jamie Hall conscripted him to work for an Israeli software developer.

In 2001, Hall and Siegel founded a company called JSmart, creating video games for mobile devices. They built it into a game-publishing powerhouse before selling the company in 2004. Siegel won't disclose the purchase price, but given his spacious digs, it's probably safe to say he did pretty well. He and Hall left JSmart in 2005, and founded MocoSpace shortly afterward.

Siegel moved to Vermont four years ago; Hall lives in upstate New York. Siegel commutes to Boston on a regular basis. He would have loved to base MocoSpace in Vermont, but says the company had a hard time recruiting locally.

Vermont's spotty cell coverage is also an issue. Ironically, Siegel doesn't get reception at his house. "I have to walk to the end of the driveway, and beyond sometimes, if I have to test something on my phone," he confesses.

But technological problems are only one of Siegel's worries - like his counterparts at MySpace and Facebook, he's got people problems, too. In January, a 20-year-old man was arrested in Denver, Colorado, for allegedly sexually assaulting a 12-year-old girl he met in a MocoSpace chat room.

He insists that safety is a high priority at MocoSpace, especially since his site plays by slightly different rules than does MySpace. Because of the way cell service is structured in the U.S., carriers such as Sprint and AT&T can restrict access to sites they deem inappropriate. So unlike other sites, from the very beginning, MocoSpace has outlawed nudity and pornography, and uses foul-language blockers to inhibit profanity (though a few f-bombs still slip through).

And every image and video posted to the site is reviewed by a MocoSpace staff member prior to publication (though plenty of scantily clad people still slip through).

MocoSpace also restricts membership to those at least 14 years old, though Siegel admits it's impossible to enforce the policy unless a user admits to lying. "People can abuse it if they want to," he says. "Almost regardless of what steps you take, you're not going to eliminate that abuse."

Keeping the site clean is a formidable challenge, but it's one Siegel seems to embrace. He believes improving accessibility to the web will have an overall positive effect. "There's a lot of people out there struggling," he says, "and social sites are really a form of entertainment, information and connection that they wouldn't have. It's amazing, how important a part of their lives these sites are."