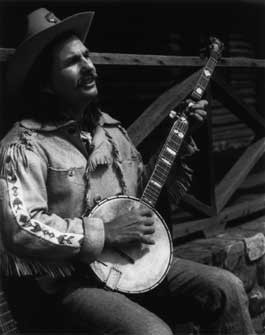 Rik Palieri is a tramp and a hobo. And if you think those are insults, then you just don’t get it. “A hobo works and wanders,” explains the Hines-burg musician. “A tramp dreams and wanders. And a bum drinks and wanders.”

Palieri’s wandering spirit has led to gigs all over the world, introducing him to fellow artists like Pete Seeger and Bruce Springsteen. Along the way, he has embraced other minstrels who wear the label “hobo” like a badge of honor. In fact, he’s a member of what might be the ultimate hobo fraternity: the order of The Rose Tattoo. Currently, he’s preparing for the first, and perhaps last, Vermont appearances of this merry band of musicians.

The Rose Tattoo was formed in the early ’70s with the legendary U. Utah Phillips as ringleader. It was a group of folks who liked the same music, humor, stories and camaraderie around the campfire and, of course, hopping freight trains. The Tattoo, whose motto is mors ante servitium — death before employment — now numbers more than 20 people. “You have to be chosen, and usually by Utah,” informs Palieri. “We keep in contact every day. All hoboes are online these days.”

Palieri, at a sprightly 46, is one of the young ones. While he clearly adores the mythology and reality of trains, you don’t see him hopping on a freighter very often these days. He’s what you call a “rubber tramp,” or a “rolling gypsy,” since his vehicle of choice is usually a camper.

“People need to understand how important trains have been, and should be, to this country,” Palieri says, going on to explain the role of itinerant workers following the Civil War. “It was their muscle and skill that did a lot of the work that built America as we know it.”

While roaming the country in search of work, the hobo community developed a common language of symbols, which they would post as warnings to their peers. Although they are no longer prevalent in the outside world, these images are inlaid on the neck of Palieri’s guitar. The cat means that a kind-hearted woman lives inside. A bird means you can use the phone. A smiley face means you can sleep in the barn. And there are other icons for trains, evil men and barking dogs.

Palieri isn’t the only one in love with this culture. He proudly reveals his hand-stitched vest from the “Texas Mad Man” and a walking stick signed by fellow Tattoo members like “Luther the Jet” and “Haywire Brack.” These folks get together regularly at huge hobo conventions, which have been held annually for more than a century. There’s a hobo foundation, a hobo museum and even a hobo graveyard. The Internet reveals an intense subculture devoted to all things hobo. So what’s the attraction?

“It’s a celebration of the road, of song, of trains, of community,” says Palieri. “We’re not trying to be slick. We’re trying to be human.”

An actual rose tattoo on Palieri’s left shoulder is a reminder of that community and all the experiences they’ve shared together. The vintage carnival-style design was chosen carefully. Other members of The Rose Tattoo have similar images fixed permanently on their bodies. Don’t ask too many questions about the group, though. “In a world of information saturation, we’re trying to keep things secret,” Palieri notes.

In fact, their purpose isn’t really about doing live shows. The Tattoo club would be just as happy to sit around a campfire and play for each other. “The only way we can afford to get together is to do a few gigs,” says Palieri, explaining that the Vermont tour was put together as a fundraising addendum to the Old Songs Folk Festival in Altamont, New York. But that doesn’t mean they won’t put their hearts and souls into the shows.

The recent debate over the future of Amtrak will likely come up at the concerts, and a show at the Historic Barre Labor Center will focus exclusively on unions. Members of The Tattoo — this time not including Phillips — will swap stories and songs, always with a touch of humor.

The Rose Tattoo’s new live CD, entitled Trains, Tramps & Traditions, includes as much banter as singing, and informs the listener about robber barons, the demise of the caboose and lots of characters like “Slo Motion Shorty.” The music is classic Americana, a warm blend of country and folk.

“You’ve got to admit, this is a solid gaff,” Phillips says at one point on the live disc. In the hobo world, a gaff is a gimmick used to make a buck. Phillips goes on to express his disgust for beggars who can’t even offer a little entertainment for the spare change. A true artist should be able to offer something for the donation — juggling, a good story, a half-assed balloon animal, whatever. “These spare-change artists, I just want to grab ’em and rattle ’em and say, ‘Where’s your sense of drama?’”

So if you think the true hobo is a thing of the past, think again. It may be a fun indulgence for people like Palieri, but events like the Vietnam War have a way of creating a new generation of full-time wanderers. Wars, droughts and economic disasters have spawned hoboes throughout American history. And, of course, some choose the vocation out of pure love for the road.

Palieri has met many such itinerants in his own years of wandering. There were the real Gypsies at the Open Roads Festival in Glasgow, and the mountaineers in Poland, where Palieri lived in 1984 as a guest of the communist government. There were plenty of drifters in the three- and-a-half years he lived in a van, traveling between shows with his dog Koza.

Today, Hinesburg is home base, but after a couple months in his cozy hillside abode, something beckons Palieri to wander once again. He’s even written a song about it: “The Road Is My Mistress.” Wife Marianna doesn’t seem to mind. She supports his habit and burns CD copies of “Hoboes and Heroes,” from her husband’s forthcoming album, Totem Pole Rik. She’s one lady who is happy to be married to a tramp. m

The Rose Tattoo will perform:

• July 7 on the Green Mountain Flyer, between Bellows Falls and Chester.
Info and tickets: flyradar@sover.net