Walk the Line: An Interview With Paul Hoffman of Greensky Bluegrass 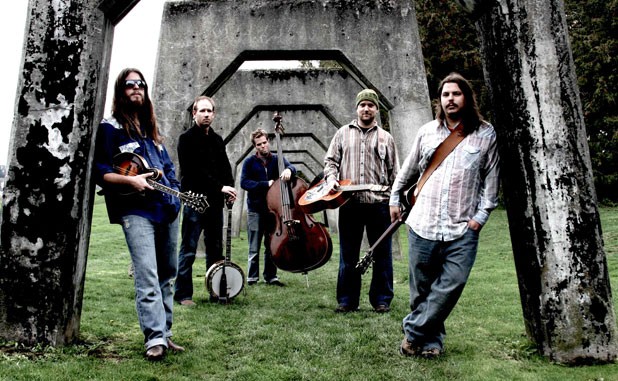 Greensky Bluegrass, from Kalamazoo, Mich., embody a dichotomy in modern acoustic music. On paper, they are a bluegrass band, ace players wielding guitars, banjo, mandolin and Dobro. But as the pun in the band’s name suggests, that description only tells half the story.

The scruffy quintet is equally comfortable playing traditional bluegrass as that genre’s heady cousin, jamgrass, and straight-up rock and roll. Greensky’s most recent album, 2011’s Handguns, owes as much to Bill Monroe as it does the Grateful Dead and the Rolling Stones. And in concert, you are just as likely to hear extended jams as tightly wound, three-minute pop songs — and maybe a Prince cover or two.

In advance of the band’s performance at the Higher Ground Ballroom on Tuesday, April 23, Seven Days caught up with mandolin player and songwriter Paul Hoffman by phone from his home in Michigan.

SEVEN DAYS: So I heard you guys drank Kid Rock out of all his Bud Light Lime.

PAUL HOFFMAN: [Laughs] Oh, yeah. We did. He left his trailer early [at a festival] and we raided his Bud Light Lime. We lie about knowing him sometimes, because he’s from Michigan. So sometimes we joke about knowing Bobby Ritchie. Like, “Yeah, I was on the pontoon boat when he shot that video, just hangin’ out.”

SD: How do you feel about being caught square in the middle of the traditional bluegrass-versus-jamgrass argument?

PH: We don’t really like to be considered on one end or the other, because we think what we do is more involved than that. But it is really nice to be able to cross over to so many different types of listeners and appeal to so many people. A lot of times younger fans will bring their parents to shows. I mean, music should have a timeless appeal. But I don’t think everyone listens to dubstep.

SD: It only seems that way, I guess. What do you think that cross-over appeal says about your music?

PH: I think it means we just play good music that’s not age or genre specific. I hear a lot people who say they love our band but they don’t like bluegrass, which is a funny thing to say. But I know what they mean.

SD: Some of that probably stems from having the word bluegrass in your name. Do you ever wish you didn’t?

PH: That’s a topic of conversation that’s been going on for years. The problem is that without the word bluegrass, the pun doesn’t make any sense. And without bluegrass, it would make more sense for Greensky to be two words. So without the one, you lose the other, the context. And I think the implication with Greensky, which is the opposite of bluegrass, it does sort of explain what we mean and who we are. We’re just as afraid of the jamgrass stigma as the bluegrass stigma. I think everyone feels the same way. You don’t want to be labeled or defined. But as much as we don’t want to be any one of these things, we are all of them. It’s however you look at it.

SD: Well, how do you look at it? How do you describe the band?

PH: I usually tell people we’re a rock-and-roll acoustic band, with bluegrass instruments. I feel like that’s pretty generic but encompassing. Rock and roll is an undefinable thing, too. It’s really more of an attitude. It can be the Rolling Stones or it can be Megadeth. It’s all rock and roll.

PH: One of the 1980s songs would probably be one of the weirdest. Lionel Ritchie’s “Dancing on the Ceiling” was maybe the most controversial. I had the idea that it would be a great bluegrass song and had to fight the band to allow it to happen. We played it for a little while and retired it. But then I saw Lionel Ritchie playing “Dancing on the Ceiling” on the CMT music awards with a bunch of country-pop stars. So I texted the band and I was like, “See? I was ahead of the curve! If we had held on, that could have been us up there with Lionel!”

SD: Any news on the new album?

PH: It’s in the bag. It’s looking like a September release, probably. We’re excited about it.

SD: Without giving away too much, what can you tell me about the record?

PH: One of the things about the new album is that we focused on more of a cohesive group delivery. Bluegrass is one of these genres where every player is a hotshot, and every song has a solo for every instrument, which is something that really appeals to us as players. It’s a player’s music. But we’re also trying not to give in to that entirely. If you listen to pop music, there might just be one solo, or no solo. There might just be a theme that’s played instrumentally and isn’t so flashy. So we tried to focus more on setting sonic pieces that aren’t so reliant on showmanship. We’re trying to present ideas in songs that are intentional and deliberate. Every album is the next step, a straight line getting sharper and sharper.