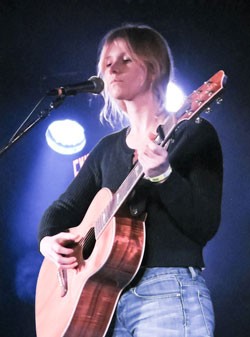 Have you bought your Waking Windows III buttons yet? If not, what gives? They’re $20 and get you into every show of the indie-rock hootenanny this weekend in Winooski. That’s like, 50 cents a band. You can’t afford not to buy one, really. (Note to WWIII organizers: You can make checks payable to Dan Bolles, that’s b-o-l-l-e-s.)

Since we ran a big WWIII preview in last week’s issue [“Wake-Up Call,” May 1], I’ll keep the hype brief this week. You already know why you should go — killer regional bands, cool venues, playing live-action Frogger around the rotary, etc.

But there are a few local shows worth pointing out to add to your schedules. In no particular order:

Great Western, Friday at the Monkey House. Seth Gallant is gone, but the band is back in action. Before the former In Memory of Pluto front man left, this was one of the cooler alt-country-ish acts in town. I’m anxious to get reacquainted.

Monoprix, Friday at the Monkey House. HUGE full disclosure: My brother, Tyler Bolles, is the bass player. And drummer Steve Hadeka works for Seven Days. Now that I’ve effectively torpedoed my credibility, I’ll tell you this: The “swampy-tonk” band’s front man, Brett Hughes, when he’s not honky-tonkin’ at Radio Bean on Tuesday nights, is one of the state’s finest and most underappreciated songwriters. Really.

Parmaga, Friday at the Winooski Welcome Center. Perchance we might hear some tunes from that long-awaited new album, boys?

Paper Castles, Saturday at the Methodist Church. Paddy Reagan, you had me at Hey! Hi! Hello!

Bandleader, Saturday at the Monkey House. Don’t know anything about them, but they come recommended from ears I trust.

Blue Button, Saturday at the Monkey House. Because I missed their show last weekend and feel bad about it. Also, they just fucking rawk.

Gloaming, Saturday at the Stoplight Gallery. A band I’ve been meaning to catch for a while. I do love me some doom rock.

MAUI! Saturday at the Monkey House. Let’s get weird.

A Snake in the Garden, Saturday at the Spotlight Gallery. Let’s get weirder.

If there is one big takeaway from last Sunday’s Higher Ground Comedy Battle, it is that it will almost certainly never again happen in May. Typically, the contest is sold out — or close to it. But, also typically, it’s held in the dead of January. Likely owing to the fact that it was the nicest evening of the year thus far — and maybe because it was also up against new episodes of “Game of Thrones” and “Mad Men” … no spoilers, please! — this year’s battle was, to put it charitably, sparsely attended. But the small crowd did little to diminish the quality onstage, which, if anything, was doubly impressive given the tough room with which the comics had to work.

In last week’s preview, I mentioned that a few dark-horse candidates always emerge from the field to challenge the favorites. That trend held true. While the likes of Kit Rivers, Pat Lynch and defending champ Kyle Gagnon were their usual funny selves, the night’s real intrigue came from some lesser-known comics.

In particular, Cori Marnellos was an unexpected delight. I’m told she finished second in overall points, and deservedly so. She won over the audience with an easygoing stage presence and dry, self-deprecating humor as oddly endearing as it was funny. She also coined my new favorite word: foobs. (That’s when you’re eating junk food and spill potato chips on your boobs.)

Newcomer Joe Borg is one to keep an eye on. The UVM freshman displayed remarkable stage presence, especially considering his age. Though his set was uneven and at times a little predictable, he landed a few of the night’s better shots.

Finalist Phil Davidson — who is actually from Chicago, not New York City, which I erroneously stated in last week’s column — turned in a pair of strong sets and might have the best K-Mart joke going.

Justin Rowe’s Monopoly movie-trailer joke was, as advertised, very clever and, from a technical standpoint, very impressive. It didn’t win the contest as some predicted, but it got him into the finals.

And then there was Carmen Lagala, who won the night with a pair of typically solid performances. Her sets were actually not as strong as I’ve seen from her before, and I didn’t score her as highly as my judging compatriots, apparently — did I mention I was a judge? But even so, she displayed the talent that has seen her develop into one Vermont’s best standups. And now she has the crown to prove it. Congrats on the win, Carmen.

Obviously, it was Lagala’s night. But for my money, the most memorable set belonged to a comic who didn’t even make the finals. Taylor Scribner, you wuz robbed. And it probably won’t be the last time.

Scribner turned in one of the most bizarre and uncomfortable sets in battle history. It was the most unusual of the night and, to me, one of the funniest.

He began by pacing the stage, breathing heavily through his nose into the mic, and mumbling vaguely but intensely about “tragedy in Syria” and how “something needs to be said.” At which point my girlfriend nervously leaned over and whispered, “Is he serious?”

And that was just it. No one could tell. Was this kid about to have a psychotic breakdown onstage? It seemed like it was in play.

He wasn’t. What happened next was bizarro comedy of a high order, a random and delightfully awkward mix of musical comedy and poetry — yup, poetry — that was unlike anything else in the contest. Remember when Zach Galifianakis was super weird — y’know, before he started making Hangover sequels? It was kind of like that. And it had no chance to win.

Scribner winning would have been like an experimental drone act taking first place in a Battle of the Bands at Nectar’s. It was the wrong setting and likely the wrong crowd. But it was also the gutsiest set of the night. I have no idea if Scribner has a more conventional act, too. If not, it’s a minor miracle his wildly offbeat shtick made it through the auditions to begin with. But, as comedians from Lenny Bruce to Bill Hicks to Dave Chappelle have proven, sometimes the best comedy is the stuff that makes you wince as much as laugh. Here’s hoping he stays with it and continues to push our buttons.

Somehow, I’ve managed to blow my entire column on two subjects. So your regularly scheduled BiteTorrent briefs will appear on the 7D arts blog, Live Culture, on Wednesday, May 8. Check it out for bits on Ryan Power, Orchard Lounge and some kid named McCartney. Also, here’s a friendly reminder that this Sunday is Mother’s Day, so don’t forget to call or send flowers. And no, being hung over from Waking Windows is no excuse, ingrates. Love you, Mom.

This Week on Tour Date with DJ Llu