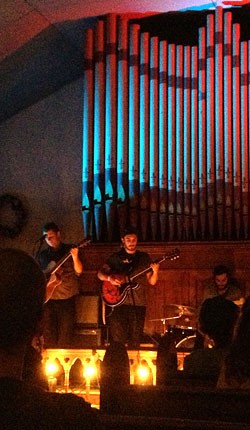 If you skipped last weekend’s Waking Windows III festival in Winooski, you missed what might have been the coolest live-music event of the year in Vermont. Sure, Discover Jazz is exponentially bigger, boasts more star power and caters to a wider audience. And the Precipice, with a full year to plan — as opposed to, like, three weeks for its inaugural run last year — will similarly showcase great local acts and foster warm and fuzzy community spirit. Grace Potter’s Grand Point North is quickly becoming a blowout end-of-summer tradition, too.

But there is a ragged quality to Waking Windows that sets it apart from those fests and makes it feel more, well, rock and roll. Taking nothing away from any of them — each fest is truly wonderful in its own way — I would submit that Waking Windows is the most representative and reflective of Vermont’s underground scenes.

I’ve used the following analogy before — and received some pissy emails claiming wanton hyperbole as a result. But, bouncing between various venues around the Winooski traffic circle last weekend, I couldn’t help but wonder if the WWIII experience was something like the earliest incarnations of South by Southwest, before corporate toxicity mutated it into the monster it has become.

When it started, SXSW was a locals-only festival, specifically designed for Austin bands. If you talk to those who were there, they’ll tell you it was small, gritty and exclusionary. And, in many ways, that brusque exclusivity was what made SXSW great. It was an event for and by the cool kids, held in seedy bars and makeshift galleries. Sound familiar? (And no, I’m not suggesting WWIII will ever turn into something like SXSW. Though it will very likely continue growing.)

When I was teenager, I worshipped local bands like the Pants, Envy and the Fags. To wide-eyed, 16-year-old me, the whole scene seemed larger than life, the epitome of cool. As I’ve gotten older, I’ve come to realize that most of the people in those bands were just that: people in bands, no cooler than you or me. (Well, except the Fags’ Eugene Hütz. He’s still the coolest.) But at the time, there was a tattered-jean veil of mystery surrounding all of them that only deepened the seduction. It was dark and dangerous. Just being there made it seem like you were in on something impossibly unique and underground, which is how I imagine those first SXSWs were.

WWIII didn’t quite bring me back to those hazy days at Club Toast or the Last Elm Café — hazy mostly because it was still legal to smoke in bars in 1995. But it came close.

Whether I was swooning, arm around my best gal, to Anders and Kendall; or digging a raucous set from Vetica while bellied up to a bar as late-afternoon sun filtered through the front windows; or following tooth ache. down a cavernous rabbit hole at the Winooski Welcome Center; or feeling closer to the divine as Alpenglow sermonized at the Methodist Church; or getting sweaty and rowdy at the blazing rock block that was the Monkey House on Friday night — everywhere I found myself, time and time again, feeling as though I was being let in on something profoundly and exclusively cool. (Note to aspiring rock writers: Don’t try a run-on sentence like that last one at home. This is professional-level grammar flaunting here.)

But here’s the thing: WWIII wasn’t really all that exclusive. The fest’s organizers estimate attendance roughly doubled from last year, indicating larger and more varied crowds. That means the cool kids from Angioplasty Media, MSR Presents and Friends + Family pulled off quite a magic trick. They delivered a festival that embodied the mystery and allure of the local rock, indie and experimental scenes yet still proved accessible enough for general audiences to enjoy — and feel cool doing it.

Speaking of cool kids, Big Heavy World and Magic Hat are once again partnering for Heavy Fest, which is slated for this Saturday, May 18, at the MH brewery in South Burlington. If you’ve never been, it’s a lot of fun and has sort of become the unofficial kickoff for the outdoor music season in Vermont. This year’s lineup includes Rumblecat, Teleport, Casio Bastard, Waylon Speed, the Brew and headliners the Jennifer Hartswick Band. Oh, and beer. Lots of beer.

Remember a few paragraphs back where I pined for my halcyon youth in the 1990s local rock scene? Sigh … where was I? Oh, right, 1995. Coming back to 2013, I’ve just received word that two of the better bands from the 1990s-era rock scene, Hover and Guppyboy, will be reuniting for a show at the Monkey House on Saturday, July 13. We’ll go more in depth on both bands as that date draws closer. In the meantime, if you need a babysitter that weekend, I’d start lining one up now. I have a feeling there might be a slew of aging rockers looking for childcare that Saturday night. Call it a hunch.

Safe travels to Trapper Keeper. The band is off on a weeklong tour that will wrap up at the Pouzza Fest in Montréal this weekend. That festival appears to have a direct pipeline to the punk and ska scenes of the early 2000s. Some of the headliners include the Slackers, MU330, Me First and the Gimme Gimmes, MxPx and the Ataris, all of whom I had on mixtapes that I wore out in the deck of my first car. Man, this week’s column is making me feel old.

Meanwhile, in Morrisville, it is time once again for the Hammer Jam at Moog’s Place, which goes down this Sunday, May 19. This is the second year the bar has hosted the fest, which is a benefit for Habitat for Humanity. And it’s a dandy, featuring 25 local bands spread out on two stages, including the Eames Brothers Band, Dead Sessions, Lesley Grant and Stepstone, Seth Yacovone, Tim Brick and many more. It also includes the winner of this issue’s “Band Name of the Week” award: funbridge.

Local songwriter Tim McKenzie is back in action after taking a hiatus of, oh, let’s just call it twentysomething years. McKenzie is best known locally as a member of the pioneering newgrass group Pine Island. But he’s likely to have played with just about every notable local of that era — this would be the late 1970s and early 1980s. McKenzie hung up his guitar when he lost his taste for life on the road, and then most of his hearing. He says he was discouraged by how little hearing aids helped — until, last November, a new technology allowed him to hear himself again. McKenzie is playing a solo show — he says he still can’t hear well in a chaotic band setting — at Signal Kitchen in Burlington this Sunday, May 19.

Last but not least, the local scene was saddened in February when drummer John Carleton was struck and killed by a car while jogging in California. Before moving to CA, Carleton had been a fixture in Vermont music throughout the 1980s and 1990s, manning the skins for bands such as Blue Rose, the Unknown Blues Band and the Jalapeño Brothers, among many others. He went on to perform with the likes of Bo Diddley and Luther “Guitar Junior” Johnson. To celebrate his life, a memorial jam is planned for Club Metronome this Monday, May 20.