A group of furloughed restaurant industry employees in the Mad River Valley is giving a whole new meaning to the greeting "We'll be your servers this evening." Rather than carrying plates to tables, they're driving insulated bags all the way to customers' homes for Waitstaff on Wheels.

When the restaurant where Jenna Rossbach had been working returned to indoor dining in the fall, she decided not to stay on there. "It just wasn't feeling great," she explained. "So I had this idea about doing delivery service. Looking around, it seemed like Mimi [Bain] and Colby [Miller] at Stoke Ramen were the only people doing delivery in the Valley."

"We had actually stopped doing delivery because our car was in such terrible shape," Bain said. "So when Jenna reached out to us, I was like, Yes! This would be a fabulous way not to put more miles on my poor 2005 Forester."

Rossbach and Bain teamed up and launched Waitstaff on Wheels in late December 2020. The courier service has created jobs for seven restaurant industry employees who lost their jobs during the pandemic. (For more on how restaurant workers are facing an uncertain future, see "Pressure Cooker.")

"The trick with delivery in a rural situation is that everyone lives so far away from the restaurants." Jenna Rossbach tweet this

Waitstaff on Wheels delivers food Thursday through Sunday to Fayston, Moretown, Waitsfield and Warren. For customers outside those towns, drivers will deliver to meeting points at Mad River Glen, the Warren Store, the East Warren Community Market and the Moretown General Store.

"The trick with delivery in a rural situation is that everyone lives so far away from the restaurants," Rossbach said. That geography makes delivery apps such as Grubhub and DoorDash impractical; none of those national networks currently operates in the Mad River Valley, Bain added.

"Mileage reimbursement is pretty funky in mountain towns," she said. "There's a federal set fee, but when you're going up a 40-degree pitch in brine and ice, that 56 cents a mile doesn't really seem worth it." 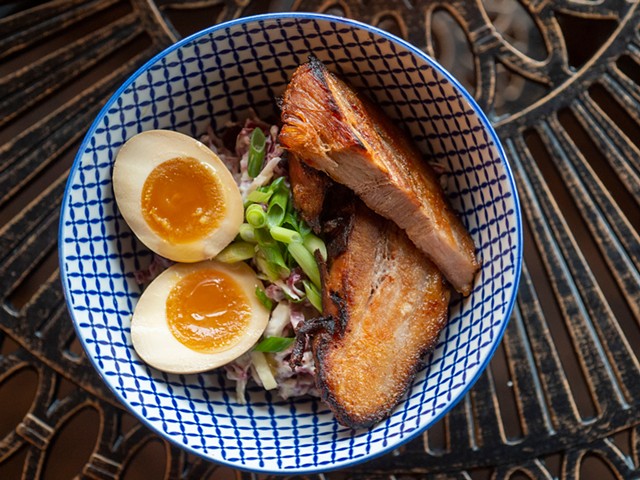 With this model, customers place their orders directly with the restaurant, as they do any other takeout order. Then they head to Waitstaff on Wheels' website to place a delivery order, selecting the restaurant they ordered from and the time they were quoted for pickup.

Customers pay $20 per delivery, and Waitstaff on Wheels' dispatch takes over the logistics from there. Dispatch workers are tipped out as if they were hosts, and the drivers get the rest of the delivery fees. Waitstaff on Wheels collects only taxes and credit card fees.

"We don't see any loss from having somebody else do [delivery]," restaurant owner Bain said. "And being able to support our friends and colleagues right now, rather than pay astronomical fees to Grubhub or DoorDash, is a complete win-win."

Another plus: The people picking up the orders are all seasoned restaurant employees who understand the flow of busy kitchens and the flexibility required to speed food efficiently to customers. "We're all coming from an industry background, thinking, The food is dying in the window," Rossbach said with a laugh. The goal is to get bowls of ramen, pizzas, burgers and fried chicken to customers as hot and fresh as they possibly can be — while observing road safety, a must in a mountainous rural area.

A disclaimer on the Waitstaff on Wheels site acknowledges that the service asks "for an amount of planning that skirts the other side of 'convenient.'" But, in a region where delivery has never really been feasible, the added step and the $20 fee "actually show the value of not having to go into town and back," Bain said.

For now, the service is set up to receive two orders per 15-minute window; Rossbach estimates that it could handle 20 deliveries per night at current staffing levels. In its first two weeks, Waitstaff on Wheels has already earned repeat customers.

The service delivers directly to the parking lots at Mad River Glen and Sugarbush Resort, an arrangement that helps skiers unboot at their cars without starving and delivery drivers stay busy in the slower 4 to 5 p.m. time slot. The service has also started delivering heat-and-eat meals from Waitsfield's Inn at Round Barn Farm during that time slot on Thursdays and Sundays; it will add prepared Saturday dinners from Morrisville-based Sustainable Kitchen starting on January 31.

"We started from a waitstaff and restaurant perspective," Rossbach said of the new business model. "But it also supports those who are traveling here and really trying to quarantine and do the right thing."