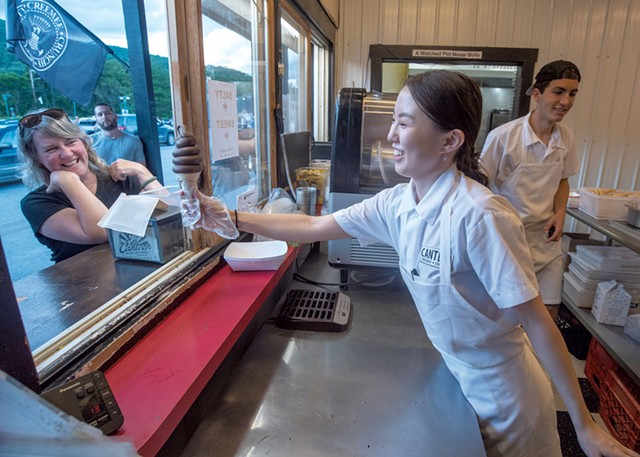 The Fourth of July was a big day for hot dogs and creemees at Canteen Creemee, the snack shack in Waitsfield whose offerings include bánh mì, dumplings and ravioli. The all-American fare was flying out of the kitchen at a record pace, making its way to customers through the walk-up window, where workers alerted people to their orders.

"Sean for creemee!" Cheryl Cheung announced, not long before closing time on the holiday.

Cheung, who's from Hong Kong, arrived in Vermont a week before Independence Day. She speaks Cantonese, Mandarin and English — but "Sean" and "creemee" were new words for her. So she checked with her coworker, Dulat Botayev, before braving — and nailing — the nonphonetic "Sean."

Botayev, 20, is from Kazakhstan. He beat Cheung to the Mad River Valley and employment at Canteen Creemee by a month. He learned English mainly by watching "The Dick Van Dyke Show," which turns out to be a very good teacher.

"Here ya go, Sally," he said to me one afternoon in June, handing me a strawberry sundae. He and his global coworkers aim for perfection in name pronunciation.

"The first few days, we're trying so hard," Botayev said. "We get it wrong."

By early July, Botayev had a solid handle on first names in the U.S. — and on his temporary home.

"Happy Fourth of July," he said to a customer, flashing a bright smile. "The American experience!"

Botayev and Cheung are two of five international employees who are working at the snack bar this summer and into the fall. The group is composed of college students or recent graduates here on J-1 work and travel visas. That program brought 1,192 international student/workers to Vermont in 2021, according to BridgeUSA, a nonprofit that works to close political divides on high school and college campuses.

"When I'm older and 70 and remembering my life, I can say, 'I've been there and met these people.'" Dulat Botayev tweet this

The five employees — from Hong Kong, Kazakhstan, Mongolia and Spain — joined the Canteen Creemee team during its busiest season. Summer is also a tough time to hire local workers, according to owner Charlie Menard. He employs high school students, but family vacations and sports schedules often conflict with summer employment, he said. The J-1 program solves that dilemma, Menard explained.

"I am so incredibly proud to be able to do this," he said, "and to be sharing this experience with other people."

Menard arranged rental housing at a local ski lodge for his international employees. He got them bicycles to ride around town and takes them on sightseeing trips to the Vermont Statehouse, Warren Falls, Church Street Marketplace and other sites. He's both employer and something of a "mom" during these summer months, Menard said.

"Charlie is funny and caring about us," Botayev said. "He made all this happen."

The "American experience" in early July meant working the three-day holiday weekend, during which Canteen Creemee set a revenue record, according to Menard. The restaurant also ran out of food, which prompted its closure on July 5.

That gave everyone an unexpected day off and a trip to Burlington to see Lightyear. Then they went to Burger King — nothing new for people from the other side of the world but the only place they found open.

It was, at least, preferable to McDonald's, they agreed, as McDonald's hamburgers are "wet and small and flat," Cheung said.

The international workers live near the center of Waitsfield in a barnlike building where the Adirondack chairs in the yard are crafted from skis. Each person has a private bedroom and use of spacious common areas — a big dining room, commercial-type kitchen and disco/bar/living room.

During the holiday week, some ski club members who typically visit Waitsfield in the winter stayed at the lodge. The young workers joined the (much) older ski club members for a cookout and dance party.

Patricia Costa-Giomi, 65, a club member from Summit, N.J., talked at the gathering with Martin Catena, a 21-year-old college student from Spain who's working the Canteen Creemee grill. She's originally from Argentina, and the two conversed in Spanish. When Costa-Giomi asked Catena what he missed from home, he named two things: olive oil and parties.

Rent at the lodge is $125 a week, the tenants said. With a wage of $20 to $25 an hour and sometimes more (including tips, which are divided among cooks and the front of the house), crew members said they're saving money and planning trips in this country before returning home in September and October.

"When I'm older and 70 and remembering my life, I can say, 'I've been there and met these people,'" Botayev said. "'I had this opportunity, and I took it.'"

Botayev, who studies robotics in college, traveled for nearly 20 hours by airplane from Kazakhstan to Istanbul to John F. Kennedy International Airport in New York City. He found a "cheap and cool" place to stay high above Times Square for a one-night stopover before catching the train to Waterbury.

"I absorbed this wave of energy," he said of his day in midtown Manhattan. "The flow was unbelievable."

In the Mad River Valley, the flow six days a week centers on filling cones and cups with creemees. Last summer, Canteen Creemee served a record-breaking 1,028 creemees in one day, according to Batkhuu Tsendochir of Mongolia, who's working at the restaurant for a second summer.

He prepared a family meal — a bowl of pasta, sliced beef, broccoli and cheese — for the crew after service on July 4. Menard thanked his team for a "good day" when they sat down to eat. It had been nonstop; a few dozen people had even been waiting in line before the snack bar opened.

One employee, Vermonter Quinn von Recklinghausen, was too tired to eat. He'd spent the day at a computer screen under the chalkboard menu taking orders from customers, leaving his post only long enough to ask the kitchen how long the wait for food was.

In a message to customers who might need a reminder of the intensity of the work, von Recklinghausen, 18, occasionally stole a glance at the thermometer that shows the temperature in the kitchen, thus (possibly) directing a customer's gaze to the instrument. It averaged 102 on July 4, von Recklinghausen said, but he saw a reading of 105.

"I was curious about what they were suffering through," he said.

Cheung, part of the "creemee squad," described a trick of her own. If a customer doesn't respond after she calls their name a few times, she walks outside with the ice cream and wanders the crowd, looking for the recipient. It's easier than shouting or remaking a creemee that melts, she said.

It took three tries to reach "Sean" for his creemee that holiday evening. He appeared in red Crocs and a cheerful mood to retrieve his chocolate-maple twist. "Sorry," he said to Cheung, for not showing up faster.

Sean turned out to be Sean Martin, 36, a musician from Barre. It was his second straight night at Canteen Creemee, which he called the "holy grail." The creemee was his first course; he was waiting on a bánh mì.

The presence of people from another country living and working in the Mad River Valley is as "refreshing as the creemees," he said.

"For someone who grew up in Vermont and who loves to travel, it's nice to see people come here and not just be tourists but be part of the community," Martin said.

He doesn't need a kitchen thermometer to know Canteen Creemee is hot.

"What a happening place to work," Martin said.