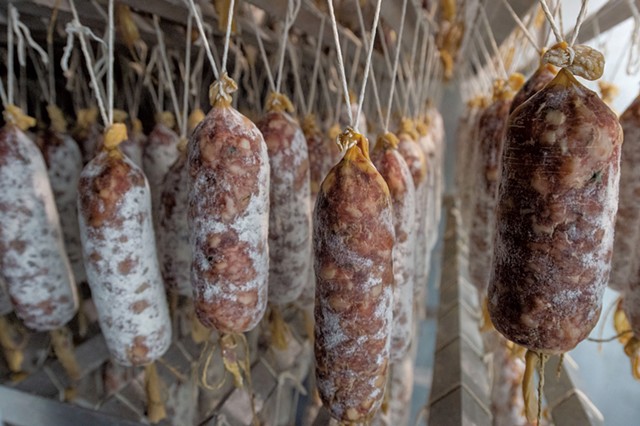 The quote "Laws are like sausages. Better not to see them being made" is often attributed to 19th-century German political leader Otto von Bismarck. However, according to a 2008 New York Times "On Language" column, the popular phrase may actually have originated with a Vermonter: John Godfrey Saxe. The poet and (briefly) Chittenden County state's attorney said, "Laws, like sausages, cease to inspire respect in proportion as we know how they are made," as quoted in 1869.

Regardless of who's credited for comparing the messy work of governing to sausage making, both activities were taking place in Waitsfield on March 3 in ways that inspire full respect.

At the elementary school, community members were engaged in town meeting, Vermont's annual tribute to grassroots democracy. Meanwhile, about a mile away at 151 Mad River Canoe Road, butcher Erika Lynch sliced up Vermont-raised pork to feed into a grinder.

"You have to figure out what you want to hold on to, what is your line in the sand." Erika Lynch tweet this

Fresh sausage, like the 100-pound batch in progress on Town Meeting Day, was not part of her original business plan.

"Sausage just doesn't interest me as much, personally," Lynch admitted, as she ran her knife through hunks of pink and white pork from Pigasus Meats in South Hero. "I was always more fascinated with the curing."

But, as any entrepreneur knows, adapting while keeping an eye on the prize is key to success.

"You have to figure out what you want to hold on to, what is your line in the sand," Lynch said.

Lynch continues to refine and market her salamis and other cured pork products. Over the past few months, she has also taken on value-added processing for three Vermont farms from which she sources pork for Babette's Table. "It's a two-way relationship," she explained.

In early February, Lynch took on another responsibility: managing the food production and storage facility where she operates her business. "Somebody had to step up and do it," she said with a resigned smile.

The 4,550-square-foot building operated for eight years as the Mad River Food Hub, serving as an incubator for a number of successful businesses. That roster includes Vermont Bean Crafters, Joe's Kitchen at Screamin' Ridge Farm, and Vermont Salumi, all of which graduated to their own production facilities. Other food and beverage companies, including Lawson's Finest Liquids, rent storage space in the building.

Mad River Food Hub founder and champion Robin Morris was ready to shift his focus. With fewer newly hatched food and beverage companies seeking incubator space, he said, he felt the time was right to transform the facility from an incubator into an "accelerator" that would help established brands scale up. But his search for a successor found no takers.

While Babette's Table had reached the acceleration phase, Lynch was not ready to go out on her own. Because she works with raw meat destined for human consumption, her products require a complex food safety plan and a U.S. Department of Agriculture-certified production plant with an inspector on-site for a portion of each production day. That is all well established at the hub building.

"I still need this facility," Lynch said, while taking a lunch break in the office.

So she established a new business called 151 Warehouse to manage the space, which still hosts a handful of food producers such as Vermont Raw Pet Food, along with storage for Lawson's Finest and others. She's trying to keep management tasks to one morning a week.

The true heart of Lynch's primary business, Babette's Table, is outside that office, though — hanging in a climate-controlled room two doors away.

Opening the heavy, insulated door, she revealed rows of stainless-steel racks from which dangled hundreds of curing salamis tied with string. The room smelled richly meaty and savory, with base notes of acidity and funk.

Different batches were distinguished by their plumpness; salamis lose moisture and contract as they age. The exteriors displayed various degrees of powdery white mold. "We inoculate them with a penicillin-type mold," Lynch said — a harmless, protective bacterium.

Two racks held whole-muscle cuts of pork: loin becoming what is called lomo in Italian, coppa made from the top of the shoulder, and leg for prosciutto.

In contrast, salamis are, essentially, cured sausages made from ground meat and fat. Unlike the fresh sausage that Lynch had ground earlier from trim, though, her salamis contain meat and backfat weighed separately for the optimal blend.

Small chunks of fat were visible through the casings of the newest batch. "That's ideal," Lynch said with satisfaction. "That's how my mentors did it."

She wasn't referring to the Mad River Food Hub team, though she said she owes much to its members, especially Morris, with whom she still consults; the facility's former meat production manager, Bill Cavanaugh; and Jacob Finsen of Artisan Meats of Vermont, who ran his now-closed business there and "took me under his wing," she said.

By "mentors," Lynch meant master butcher-charcutiers Kate Hill and Dominique Chapolard, with whom she studied in southwestern France for two months in 2016.

Lynch traveled there with her spouse, Julie Morton, along with their two young children. The pair had moved in 2009 from Colorado back to Morton's native Vermont. Both were teachers, but Lynch was seeking change.

After long days of working with teenagers, she said, "I was just spent all the time. I didn't have the resources for my own kids."

She had always loved and appreciated food. "I grew up in Kentucky in a family where everything revolved around food," she said, "but I knew restaurant work was not going to work for my family, and there were too many bakers already."

To learn more, Lynch went to France to take Hill and Chapolard's course, which covered the entire process, from butchering Chapolard's own animals to making charcuterie — including saucisson sec, the French version of Italian salami. At the time, Lynch said, no one was teaching this kind of full-cycle approach in the U.S.

Back in Vermont, Lynch used the Mad River Food Hub's USDA-inspected plant and equipment to experiment and then to launch Babette's Table, named in homage to the 1987 Danish film Babette's Feast. She sourced pork from Snug Valley Farm in East Hardwick and from the Fayston meat operation associated with von Trapp Farmstead cheese.

Lynch's relationship with the three Vermont-only farms involves making value-added products for them to sell under their own brands. Her dual role as customer and processing partner makes her doubly valuable to the farmers.

"Erika is an incredibly important customer for us. She values how our animals are raised, and we've worked together to come up with a price point that works well for both of us," said Kelsey O'Connor, co-owner with her husband of Pigasus Meats. The sausage Lynch makes for their farm has also allowed the couple to expand retail distribution. "It feels like we are finally able to hit our stride," O'Connor said.

While Lynch was busy processing the O'Connors' pork, Emily Virzi of von Trapp Farmstead poked her head in the door. She had stopped by to pick up some stored meat.

Virzi explained that the von Trapp pig herd exists to provide an in-house use for the whey produced during cheesemaking; it makes great pig feed, creating a closed loop. With Lynch's help, that whey-fed pork becomes fresh pork sausage and von Trapp Farmstead's own line of salamis, which the company can sell to accounts around the Northeast.

"What she's doing enables us to continue doing what we're doing," Virzi said.

Investment in equipment has enabled Lynch to grow while making her production more efficient. "In 2017, I was producing batches 30 to 50 pounds at time," she said. "Now I can do 500 to 600 pounds in less time than it took to do those smaller amounts. It's a totally different game." She hopes to receive a Working Lands Enterprise Initiative grant for a large stuffer, which will further increase the efficiency of sausage and salami making.

Lynch has also made compromises for efficiency, however, such as using primal cuts and trim rather than starting with whole animals, as her mentors taught her.

Like many early-stage entrepreneurs, Lynch constantly examines her balance sheet and checks that proverbial line in the sand. While measuring out spices to season the sausage, she paused to toast whole cumin seed on the stove. "I don't think a lot of sausage makers toast their spices fresh," she said.

Another potential compromise Lynch is considering is stapling her salamis closed instead of hand-tying them. "But that would make us look like everyone else," she said ruefully.

"What is it you're going to hold on to?" Lynch asked rhetorically. "Everyone has to figure that out for themselves. Is it best-quality spices? Is it local meat? Not doing whole animals? That's one thing I gave up. But local meat, that's our line in the sand. I won't give that up."