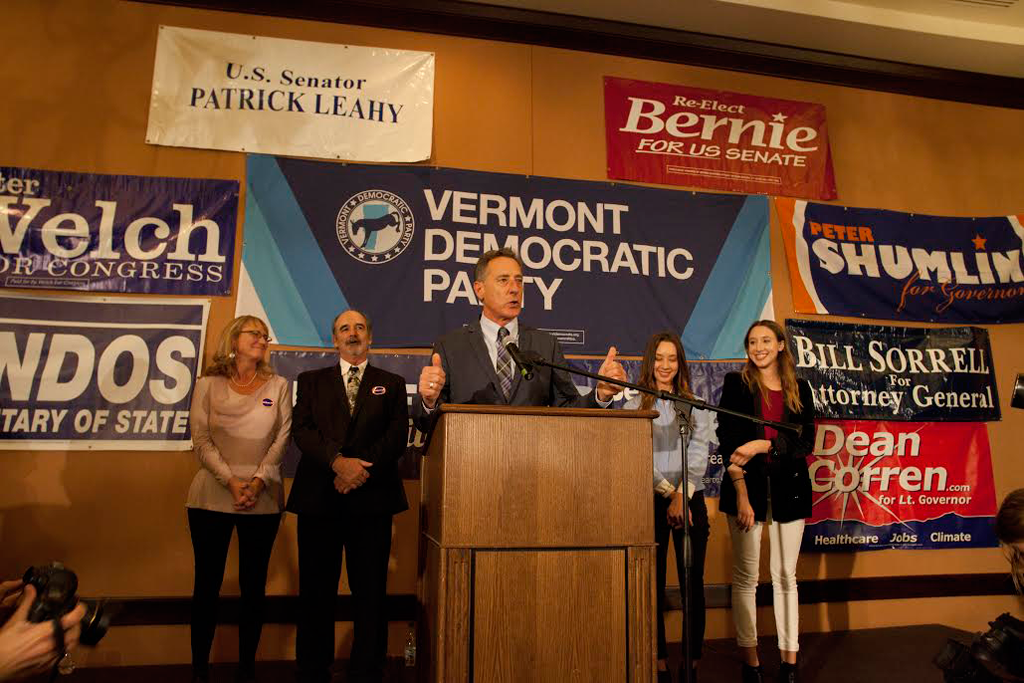 As Seven Days went to press Tuesday night, the message from Vermont voters was anything but clear.

A number of top incumbents cruised to reelection: An hour and a half after the polls closed, the Associated Press called the hotly contested lieutenant governor's race for two-term Republican Phil Scott over Progressive/Democratic challenger Dean Corren.

By then, Congressman Peter Welch (D-Vt.) had already thanked the Democratic poo-bahs assembled at the Burlington Hilton for helping him dispatch Republican Mark Donka for the second time in a row. Most of his fellow statewide Dems hardly faced a challenge.

But early results also showed a fair number of incumbent Democratic legislators trailing or outright losing. In his own remarks at the Hilton, House Speaker Shap Smith (D-Morrisville) said the message he heard Tuesday was that "people around this country and in this state are worried. They're worried about what things look like for them and their future."

Disconcertingly for the assembled Dems, Gov. Peter Shumlin, the party standard-bearer, was hovering in the mid- to high-40s around 10 p.m. He was still leading Republican Scott Milne and far outpacing Libertarian Dan Feliciano, but not by the margins he'd surely hoped for.

If Shumlin failed to clear 50 percent of the vote, the race would be settled by the legislature — a Democratic legislature, to be sure, but not quite as blue as it was. Such a result would certainly signal that at least half the state wants something different from Montpelier.

For full results and analysis, check out our news and politics blog, Off Message, throughout the week at sevendaysvt.com.

The dust is still settling on the 2014 midterms, but that shouldn't keep us from thinking about 2016.

In a few months, the 74-year-old Montpelier native will pass the late senator Ted Stevens of Alaska as the seventh longest-serving senator in U.S. history. At the end of a hypothetical eighth term, he'd have out-served Ted Kennedy and Strom Thurmond — and he'd be nipping at the historical heels of Daniel Inouye and Robert Byrd.

It's always foolish to bet against a Leahy reelect. The guy clearly loves the institution and his role as its elder statesman. It's pretty difficult to imagine the Senate without Leahy — or Leahy without the Senate.

But if Republicans succeed in winning the majority — and, again, we don't know that as of this writing — will Leahy think again about six more years?

In the minority, he would have to surrender his cherished role as president pro tempore to Sen. Orrin Hatch (R-Utah). Gone would be his corner office in the Capitol, his around-the-clock security detail and that whole third-in-line-to-the-presidency thing.

More practically, Leahy would lose his chairmanship of the Senate Judiciary Committee, leaving him second fiddle to Sen. Chuck Grassley (R-Iowa) during the panel's all-important court nomination hearings. According to spokesman David Carle, Leahy would also likely lose staff members attached to Judiciary, the Appropriations subcommittee he runs and the pro tem's office.

But, Carle argues, none of that portends a vanquishing to obscurity.

"He has been in the majority several times and in the minority several times and has been highly and unusually effective either way in his work for Vermont in the Senate," Carle says. "Whatever the outcome, he will continue to be the dean of the Senate and the most senior member of the Appropriations, Judiciary and Agriculture committees, in a body where seniority matters."

A Leahy retirement would lose Vermont tremendous clout in the Senate. Its effect on the state's bottom line would be palpable. It would also set off a mad political scramble to replace him.

The most obvious contenders would be Congressman Welch, 67, and Gov. Shumlin, 58, though both men feign disinterest, perhaps out of respect for Leahy. If either was to leave his current job to run for Senate, that would provide openings for the next generation of Vermont politicos — including, presumably, Speaker Smith, Chittenden County State's Attorney T.J. Donovan, Sen. Tim Ashe (D/P-Chittenden) and Burlington Mayor Miro Weinberger.

But don't hold your breath.

Asked last Thursday whether losing the Senate would prompt him to retire, Leahy said, "Oh, I haven't even thought about that. I never make a decision 'til the year before."

On Tuesday night, after taking the stage at the Hilton to his campaign anthem — the Grateful Dead's "Truckin'" — Leahy advised the assembled Dems to keep the song handy.

"You may need it again," he hinted.

Tuesday night featured plenty of drama, but the next legislative session will surely top it.

That's, like, all three third rails of Vermont politics.

Who will lead each side into battle remains to be seen. Rumor has it that Rep. Willem Jewett (D-Ripton) will surrender his post as majority leader, which could give Smith an opportunity to rebuild his leadership team. Jewett says such talk is premature.

"It's all just rumors," he says. "I will make that announcement at a later time."

It's unclear whether Campbell or Rep. Don Turner (R-Milton), the minority leader, will face challenges to their leadership. Behind the scenes, members of their respective caucuses grumble about the two men — complaining they're disorganized, overly reactive and short on policy chops. But no candidates have emerged to replace them.

A constant criticism of Turner's leadership is that he failed to recruit enough candidates to seize the moment in this fall's elections.

"If Walt Freed was running that show, the very balance of the House would be in play," says one insider, of the former Republican speaker who served until 2005.

"The only thing I can say is we recruited candidates for well over a year," Turner says. "We did everything we could, short of forcing them to run."

Among House Republicans, credible Turner alternatives include Rep. Heidi Scheuermann (R-Stowe), who nearly ran for governor this year; Rep. Patti Komline (R-Dorset), who previously served as minority leader; Rep. Kurt Wright (R-Burlington), who has run for mayor of the Queen City; and Oliver Olsen, an ex-rep from South Londonderry who's returning to the Statehouse this year.

All four share the same handicap: They're moderates in a caucus dominated by conservatives. Heck, Olsen, who filed as an independent this year, managed to win the write-in nomination of the Democrats and Progressives, along with the Republicans.

In the Senate, Campbell faces a couple of new challenges: His talented chief of staff, Rebecca Ramos, left for a lobbying job last spring. He still hasn't hired a replacement, and it's unclear whether whoever gets the job can run the show like Ramos did.

And Campbell's new gig as a part-time, deputy Windham County state's attorney appears to be pulling him away from the Statehouse. Campbell says he's spending 50 to 60 hours a week on the 20-hour-a-week job and plans to work Mondays and over the weekends when the legislature is in session.

Who would replace Campbell is even less clear. The two names that come up most often are Sen. Claire Ayer (D-Addison) and Ashe, but both say they won't challenge the incumbent.

"If he called me and said he didn't want to do it, I think given how serious things are this year, I would consider it," Ayer says.

As a loyal Democrat with experience chairing the Senate Committee on Health and Welfare, Ayer could be a helpful ally to Shumlin as he pursues single-payer. Ashe has a more adversarial relationship with the administration, which could appeal to more independent-minded senators, but others criticize him for keeping his cards too close to his vest.

"I think if members of the Senate thought that I would be a capable leader of the Senate, I would certainly be interested," says Ashe, who chairs the Senate Finance Committee. "But that's all in the context of my earlier statement: that if John is running for pro tem, I am certainly not, under any circumstances."

Given their positions at the top of two key committees, Ayer and Ashe may find they have as much power where they are as they would as pro tem. Ayer says she took former senator Jim Leddy's advice to heart when he said, "Being a chair is better than anything. You're better off being chair of the doghouse committee than whip or something like that."

As for Campbell, he says he's up to the challenge.

"I think I'm the type of person where when there's a lot at stake, that makes you take your game up a couple notches," he says. "I hope that everyone's got their game face on."

The bloodbath continues at the Burlington Free Press.

For the past month, corporate owner Gannett Company, Inc. has been forcing Freeps reporters and their brethren around the country to reapply for new jobs at the old shop. Last Thursday, they learned their fates.

Higher education reporter Tim Johnson, a 16-year veteran of the paper, was laid off. Statehouse reporters Nancy Remsen and Terri Hallenbeck were reassigned to cover community news. On Tuesday, the latter two confirmed they would leave the paper rather than abandon their old beat.

In a post on her Facebook page, Hallenbeck said Gannett had decided to "focus on pursuing the most popular stories as measured by website clicks," which "no longer seems to include many of the stories I've had the pleasure of covering the last 10 years as a Statehouse/political reporter at the Free Press."

"It breaks my journalistic heart, but I can no longer pretend it's not happening," wrote Hallenbeck, who has spent 16 years at the paper.

"Tomorrow will end 40 years of reporting for daily newspapers in Maine and Vermont," Remsen, a 19-year veteran of the Freeps, wrote in her own post. "It has been a great run that is ending a little earlier than I wanted — but so be it."

News of the Statehouse bureau's departure came just hours before the polls closed Tuesday, a "significant irony" Hallenbeck noted in her post. In a classy move, Remsen and Hallenbeck got right back to work, covering the election returns from the Democratic and Republican watch parties in Burlington.

Counting their departures, six of 28 editorial staffers have left the Free Press — voluntarily or not — in the past three months. As always, executive editor Mike Townsend refused to comment.

The original print version of this article was headlined "Waiting Game"