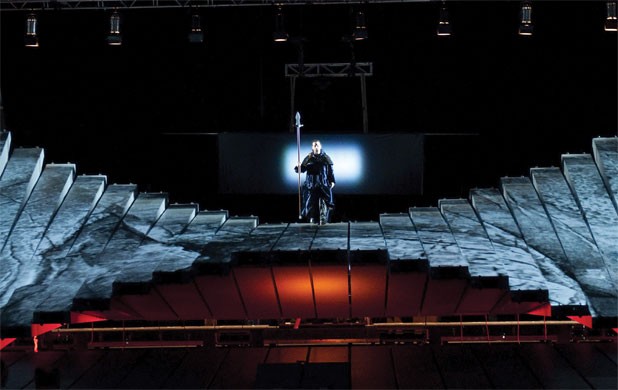 A castle for the gods reached by a rainbow. A subterranean population of dwarves. Underwater maidens guarding a stash of submerged gold.

This is the fantasy world of Richard Wagner’s Das Rheingold (The Rhine Gold), the first opera in his four-part epic Der Ring des Nibelungen (The Ring of the Nibelung). The Ring cycle contains some of the most dramatic and thrilling music ever written. But imagine staging this behemoth.

Not a problem, if you’re the Metropolitan Opera in New York. The Met just opened its season with an entirely new, $16 million production of the Ring. Directed by Robert Lepage — a multitalented Québecois who also staged the Las Vegas Cirque du Soleil show — it has a set dominated by a 90,000-pound apparatus consisting of 24 moveable planks. Add video projections, suspended body doubles, and the likes of baritone Bryn Terfel and mezzosoprano Stephanie Blythe, and you will have, according to early reactions, some stunning nights at the opera.

Vermont audiences can experience the new Ring in real time through the Met’s popular “Live in HD” broadcasts at several area theaters. Of this season’s 12 broadcasts, the first is Das Rheingold, and the last is Ring opera number two, Die Walküre. (The final two operas are scheduled for the 2011-12 season.)

While fanatical Wagnerites brace themselves for change, others may need some help just grasping the outlines of the German masterpiece, first performed in 1876. Or so thought Doug Anderson, director of Middlebury’s Town Hall Theater — one of four Met live-broadcast venues in the state. On October 4, Anderson brought Ripton resident Jerry Shedd, a retired music educator, to the Middlebury Community House to summarize and play musical motifs from Das Rheingold.

“You don’t need to talk people through Carmen,” Anderson says, referring to the perennially popular opera by Georges Bizet. “But I think we all agree that the Ring cycle is” — and here he begins to chuckle — “this nearly insurmountable mountain, and we could all use some help.”

Shedd, 63, is accustomed to giving that help: He taught fifth graders the Ring every year of his 33-year career in New York State’s public schools. More recently he gave a version of his talk, entitled “Das Rheingold Explained!” and including his own demonstrations on trumpet and trombone, to seniors at Elderly Services, Inc. in Middlebury.

Shedd first fell for Wagner as a sophomore at the State University of New York at Potsdam’s Crane School of Music, where he earned his degree in music education.

“I roomed with two men [who loved the Ring]. It was sort of a thing we did in the evenings: We’d listen to a little more of it every night,” he recalls by phone.

Shedd says the Ring can be enjoyed on many levels — there’s even a “fine” graphic novel, he points out — but one is purely musical: Wagner uses leitmotifs, or short orchestral themes, to signal ideas or objects to the audience.

Among the cycle’s nearly 80 leitmotifs is one, played on a trumpet, which signals the main character Wotan’s sword. Yet when the tune is first heard, the sword is just an idea in Wotan’s head.

“That’s something unique in the world of opera: to get across something meaningful with no action or dialogue on the stage about it,” Shedd notes.

He assures those who missed his talk that the story of Das Rheingold is “still perfectly comprehensible” from the translation provided in subtitles to broadcast viewers.

As for the new production, Shedd is apprehensive. He’s a devotee of the Met’s previous staging — which was retired in 2009 after a 22-year run — and owns the whole 15-hour production on DVD.

“Maybe I’ll be surprised,” he concedes.

The Metropolitan Opera broadcasts Das Rheingold live on Saturday, October 9, at 1 p.m. at Palace 9 Cinemas in South Burlington ($24/$22 seniors); the Town Hall Theater in Middlebury ($22/$10 students); the Latchis Hotel and Theatre in Brattleboro ($24); Catamount Arts in St. Johnsbury ($23/$21 Catamount members/$16 students); and Spaulding Auditorium, Hopkins Center, Dartmouth College, Hanover, N.H. ($27.50; currently sold out). Each venue will replay the broadcast (as an “encore”) on a different date; check websites for schedules.