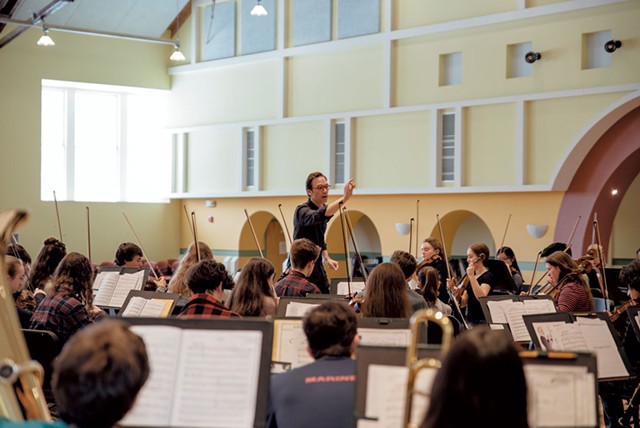 A year ago, Vermont Youth Orchestra Association music director Benjamin Klemme decided that the group's winter concert, scheduled for January 20, would honor Dr. Martin Luther King Jr. He programmed Duke Ellington's 1973 Three Black Kings, the last movement of which is a triumphantly jazzy, walking-pace homage to King and the civil rights marches he led. Klemme also chose the second movement of Antonín Dvořák's 1893 New World Symphony, which is inspired by African American spirituals that the Czech composer first heard from his black student, baritone Harry Burleigh, while teaching at a New York conservatory.

The concert program, titled "Beyond the Frame — Depictions of a Dream," has since grown into an unusually collaborative multimedia event.

During a regular meeting of Vermont arts-organization executive directors, the Vermont Humanities Council's Christopher Ilstrup and the VYOA's Rosina Cannizzaro hit on an idea for their first collaboration. The VHC had chosen March: Book One, a graphic novel about civil rights leader and U.S. Rep. John Lewis, for this year's Vermont Reads, its one-book statewide reading program. The VYOA concert seemed like the perfect venue for — why not? — a book-program launch.

Klemme selected four excerpts pertaining to Lewis and King's interactions from March, which was cowritten by Lewis and Andrew Aydin and illustrated by Nate Powell. These excerpts will be projected above the orchestra between performances while the prerecorded voice of Reuben Jackson, former host of Vermont Public Radio's "Friday Night Jazz," reads the text. (Jackson, who moved to Washington, D.C., last February to work as a jazz archivist at the University of the District of Columbia, will return to attend the concert.)

Klemme also invited Counterpoint, Vermont's professional a cappella choir, to perform African American spirituals and freedom songs. This will be Counterpoint's first collaboration with the VYOA, too, as well as its first performance on the Flynn Mainstage. To accommodate the large space, director Nathaniel Lew has roughly doubled the number of Counterpoint singers to 23.

Lew selected six spirituals for what he calls a "carefully curated set." Two were arranged by Counterpoint's founder, Robert De Cormier, whose legacy includes a lifelong interest in learning and disseminating spirituals through his arrangements. De Cormier, who was white but worked closely with Harry Belafonte and others, arranged "Hold On" and "Oh Freedom" specifically for the choir not long before he died in 2017.

Lew has also programmed "My Lord What a Morning" by Burleigh. The baritone from Pennsylvania was 26 when he was called into Dvořák's office to sing the spirituals he had been singing in the halls while doing a work-study cleaning job, as Lew describes it. Burleigh went on to become a leading classical arranger of African American spirituals and composer of art songs.

It was Dvořák who gave the budding composer "the conviction that he could use spirituals as melodic material," Lew says. "It feels like this founding myth of American music. After [Dvořák and Burleigh] worked together, Dvořák told the newspapers that African American spirituals could become the germ of a new American style of music. People were appalled, of course — it was 1895 — but the joke was on them. He turned out to be 100 percent correct."

VYOA's musicians learned about this history during a visit from Counterpoint. They're also reading March while practicing their parts — including solos in the Dvořák and Ellington pieces that will be played, respectively, by English horn player Kathryn Meyer of Stowe High School and alto saxophonist Caleb Benz of Middlebury Union High School. The VHC has given 20 copies of the graphic novel to the orchestra, which is lending them to its members on a rotating basis.

The Vermont Reads program has grown significantly since it began in 2003, according to director of community programs Tess Taylor and her assistant, Richelle Franzoni. The VHC has ordered 4,000 copies of this year's book to give gratis to the libraries, schools, reading clubs and other groups that successfully applied for the program. It expects to order more after a second round of applications comes due on June 1.

Though he left Vermont after six years in part because of exhaustion with the state's predominantly white demographics, March narrator Jackson, an African American, says he was "honored to have done what I could" for the concert to celebrate King's legacy.

Before moving to Vermont, Jackson was the archivist and associate curator of the Smithsonian Institution's Duke Ellington Collection for 20 years. "I was excited about Kings because it's a lesser-known work," he says, adding, "Ellington is one of the foremost American composers out there. He hated the word 'jazz.'"

Jackson also welcomes the opportunity to help "make King's and Lewis' words relevant to younger people." He came to Vermont to take a job teaching English at Burlington High School, a position that lasted two years.

"I'm old enough to remember the civil rights era," says the 62-year-old. "I grew up in D.C., but my parents were from the Jim Crow south — Georgia and Florida. [When we visited there,] I was told, 'If you're walking to the corner store and you see white guys following you, you go knock on a black person's door.'"

At "Depictions of a Dream," he says, "people can think about how these excerpts [from March] connect to Vermont in 2019." And audiences can honor the national holiday by witnessing the pervasive impact of African American music on U.S. culture.