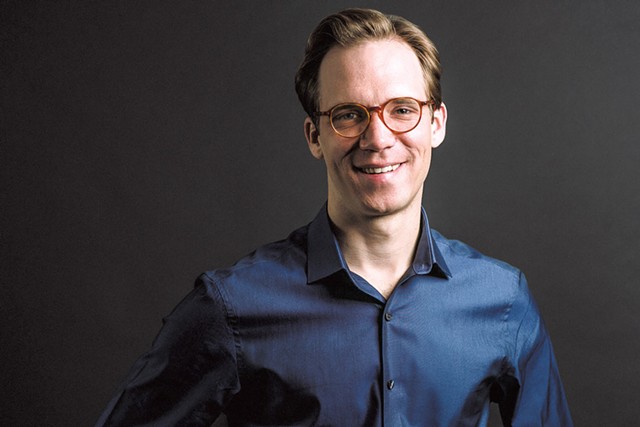 A full-time directorship in the youth-orchestra world is rare. That's one reason why the Vermont Youth Orchestra Association's search last year for a new music director drew 98 applicants from as far as Venezuela, Russia and France.

The organization also commands respect as a member of the League of American Orchestras, explains executive director Rosina Cannizzaro, and for drawing a high level of playing from its students despite not being based in an urban area or near a conservatory. Then there's its relatively impressive stand-alone $600,000 budget. No umbrella organization, such as a regional orchestra, shares the funds.

An articulate and earnest Iowan, Klemme can talk doctoral theory but also wax enthusiastic about teaching emerging musicians. He earned his master's in orchestral conducting at the Cleveland Institute of Music and a doctorate in the same at the University of Minnesota. Now 35, he's already conducted a host of youth and college-level orchestras in Minneapolis, Sante Fe and elsewhere. Klemme met with Seven Days for coffee to talk about his new gig.

SEVEN DAYS: You conducted your first VYO concert on September 24. What do you like so far about the job?

BENJAMIN KLEMME: I was so, so proud of them. I love inspiring young musicians to perform great orchestral works at the highest level but also to expose them for the very first time to composers. I have the privilege of seeing their eyes light up at these incredible works of expression and creativity.

Like Tchaikovsky's Fifth Symphony. That's this year's project — I'm calling it "Tchaikovsky in Vermont." In my experience, teenagers love Tchaikovsky. They love the overt drama of it. He blends the shocking and the beautiful.

SD: Can you say more about "Tchaikovsky in Vermont"?

BK: Tchaikovsky came to America in 1891 to conduct the opening concerts at Carnegie Hall, then traveled to Philadelphia, Baltimore and Washington, D.C., and ended up at Niagara Falls. As a new Vermonter, I asked the students, "What would Tchaikovsky have experienced here, had he come in 1891?" The Shelburne Museum curated a tour for us to learn about what this place was like then. And [former state poet laureate] Sydney Lea wrote a poem [imagining] Tchaikovsky visiting Vermont.

On [that] Sunday, the students played the second and fourth movements of Tchaikovsky's Fifth, and one of them read the poem. At the January concert, they'll play the first movement. We're inviting professional ballet dancers, musicians and conductors to come talk about their experiences performing Tchaikovsky, give informal performances and answer students' questions while we film them.

We'll show an edited version [of those interviews] at the January concert. Then they'll perform the whole symphony at the May concert. They really have the opportunity to master it. It's a 50-minute symphony.

SD: When you were deciding on an undergraduate major at the University of Northern Iowa, why did you choose music education?

BK: I come from a nonmusical family in the Quad Cities. I started in public school band playing trombone, and I became hooked on playing in a group. Eventually I sang in choirs and played in community bands. Truly, my life was transformed by the music educators in my life. I wanted to learn the skills to be able to transform other students' lives the way mine was.

SD: The VYO has some very successful alumni. For example, violinist Soovin Kim founded the Lake Champlain Chamber Music Festival. Are you always on the lookout for the next Soovin Kim?

BK: It's our job to prepare the Soovin Kims of the world for whatever musical context they may find themselves in — that's why I've instituted seating auditions for every concert. But we also want to give all our students an appreciation and lifelong love of music. Our mission is to invest in our students' citizenship skills, leadership skills and collaborative skills.

SD: What are some challenges facing the VYOA?

BK: What I want for the future of this organization is to bridge the musical opportunity gap. Our state is very rural. A student should never be unable to participate because of geography. We need to think creatively about coming into contact with as many students as we can.

SD: Do you have children?

BK: Yes, I have a 7-year-old, Simon, and a 4-year-old, Winston. Simon plays in Prelude [the VYOA's introductory strings program for students entering grades 2 to 5], so I'm a VYO parent, too. He has to practice his orchestral music every day for 10 minutes. And that's my expectation for all my students. Simon usually ends up playing for 25 minutes a day — he's a very self-motivated person, so I'm lucky. Playing in a group really excites him, especially hearing that depth of sound. He even asked about the bass and viola parts the other day. It's exciting.