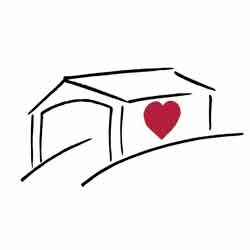 Ray Arsenault “hearts” covered bridges. “There’s something so very stoic about them,” the Stamford-based photographer says. “Their history, workmanship and way of bringing people together.” Like many other Vermonters, Arsenault was heartbroken when many historic bridges were damaged or destroyed by Tropical Storm Irene in August. That’s why he’s designed a simple image — a line drawing of a covered bridge with a red heart on one side — with the goal of raising funds to repair them.

Arsenault, who markets greeting cards and posters featuring his photography, is perhaps best known for his Doors of Italy and Doors of Vermont posters. While capturing the medieval Italian doors was a project of intrigue and whimsy, Arsenault says he was especially motivated to work in Vermont, the place he’s “proud to call home.”

Last year, on his trek around the state to capture images of doors, he came across a map siting every covered bridge in Vermont. Already enamored of the landmarks, Arsenault decided to photograph them, too.

“Every bridge tells a story,” he says. “Covered bridges carry us over to the other side in a way that modern bridges cannot.”

A pivotal moment in Arsenault’s process came when he took an interior shot of the Paper Mill bridge in Bennington. Right away, he felt the image would become the focal point of a new print. And, with that, the Covered Bridges of Vermont poster began to materialize before his eyes. Production started soon after.

When Irene swept through Vermont, many of the 19 bridges featured on the print were damaged — and some, such as the Lower Bartonsville bridge, were washed away.

“I cannot explain the pain and sorrow I felt,” Arsenault says. “I also could not continue marketing and selling my work after the storm.”

With his heart heavy from the disaster, Arsenault says, it just didn’t feel right capitalizing on Vermont’s bridges. Though he had already begun donating a portion of profits from his prints, that wasn’t enough.

The photographer designed his I Heart Covered Bridges icon in about two minutes, he says. He sent the sketch to a local printer and two weeks later had Euro-style stickers, note cards and T-shirts in hand. Fifty percent of profits from sales of this merch will go directly to Preservation Trust of Vermont and toward rebuilding the Lower Bartonsville bridge. In dedicating his talent to the cause, Arsenault joins Bellows Falls artist Charlie Hunter, who has been selling his art-deco-style prints of the Lower Bartonsville bridge and donating half the proceeds.

“I’d like to be able to write an initial check for $5000 to $10,000 for our bridges,” Arsenault declares. In fact, he says he’d like to write a check like that every year until repairs are complete.

“The sticker is generic,” Arsenault explains. “You could live in Iowa and love covered bridges.”

He’s hoping these products will make their way around the country and get everyone to chip in for the cause. They can be purchased at select local shops or online at iheartcoveredbridges.com.

“It would make me very proud to see these stickers on cars throughout the state,” Arsenault says, “knowing that Vermonters do care about their covered bridges.”