Voting-Related Charter Changes Will Be on the Ballot in Burlington 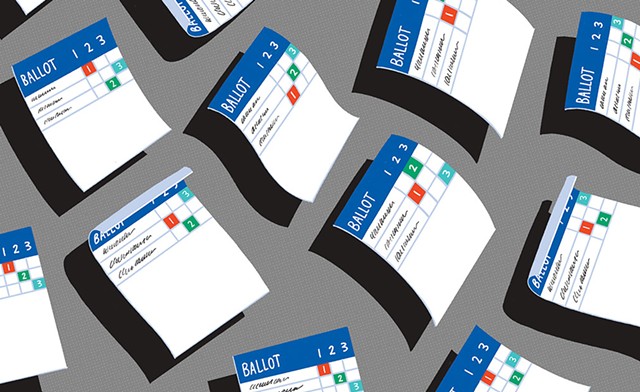 Burlington city councilors on Monday approved two resolutions that would change how elections are conducted in the Queen City.

The first would allow mayoral, school board and election official contests to be decided with ranked-choice voting; the second would extend voting rights to noncitizens living in Burlington legally.

Both would require amending the city’s charter, a process that requires approval by voters, legislators and the governor before becoming law. Pending approval from Mayor Miro Weinberger, the items will be on the Town Meeting Day ballot in March.

But the mayor's sign-off is no sure thing. In 2020, he vetoed a resolution to use ranked-choice voting in mayoral, school board and city council elections but later allowed a council-only version to pass.

As for the latest proposal, Weinberger "is reviewing the resolution and related material on voting systems" and will make a decision before the council's next meeting on December 5, a spokesperson said.

On Monday, the noncitizen measure passed unanimously, but the ranked-choice voting item garnered mixed responses after some councilors raised concerns that school commissioners hadn't had enough time to review it. It passed on a 7-3 vote after a debate punctuated with two five-minute recesses.

Can Once-Maligned Ranked-Choice Voting Make a Comeback in Burlington?
By Courtney Lamdin
Politics
It’s not the first time Burlington has considered either proposal. Voters rejected noncitizen voting in 2015, and, while councilors resurrected the issue in 2019, they left the question off the March 2020 ballot.

The ranked-choice voting measure would allow voters to rank candidates in order of preference. If no candidate received a majority of votes in the first round, the contest would go to an instant runoff in which the last-place finisher is eliminated and votes for that person are assigned to the voters' second choice. The process would continue until one candidate hit the 50-percent-plus-one threshold.

Proponents say ranked-choice voting is more democratic than the city's current voting system, which requires just 40 percent of the vote to win. Opponents, however, say the system is flawed and point to the 2009 mayoral election, in which Progressive Bob Kiss won despite falling short in the first two voting rounds. Voters repealed the system in 2010 but resurrected it in 2021 for city council elections. It will first be used in a special East District election on December 6.

Burlington City Council Candidates Have Different Approaches to Housing, Public Safety
By Courtney Lamdin
Politics
Councilor Joan Shannon (D-South District), a proponent of ranked-choice voting, attempted to amend the latest resolution by striking school board and election official contests from the proposal, leaving just mayoral elections. Shannon said she heard mixed opinions from school commissioners about the proposal and wanted to give them a chance to weigh in.

Some of Shannon's colleagues, however, argued that school commissioners could participate in upcoming public hearings, after which councilors could amend the language before placing it on the ballot. Only half of the council was persuaded: Shannon's motion failed on a 5-5 tie vote, with independent Councilor Ali Dieng (Ward 7) joining the four Progressives in voting no.

Shannon lamented that she'd have to vote against the original resolution.

"I am in the very awkward position of feeling very strongly about this issue, about wanting to see ranked-choice voting be implemented here," she said, but "I don't feel that this is fair to the school board members in terms of the process."

Councilor Mark Barlow (I-North District) agreed and said councilors had previously pledged to test the voting method in council elections before extending it to mayoral ones.

To do otherwise, one constituent told Barlow, is "political bait and switching," he said. "We were going to do one thing, and now we're doing something different."

Scott Vetoes Noncitizen Voting Proposals, Signs Bupe Bill
By Colin Flanders
Off Message
The noncitizen voting proposal, by contrast, passed unanimously with no debate. The measure recognizes that noncitizens are equally affected by their local government as those born here but have no say in policies.

If approved, Burlington would join Winooski and Montpelier in allowing all legal residents to vote.

But it wasn't an easy road for those cities. Voters there approved charter changes — as did lawmakers — but Gov. Phil Scott subsequently vetoed the proposals in June 2021. Lawmakers overrode the veto, but months later the Vermont GOP and Republican National Committee sued over the charters, claiming they violated a provision in the Vermont Constitution that limits voting to U.S. citizens age 18 and over. Both suits were dismissed earlier this year.

Related Winooski, Montpelier Will Allow Noncitizens to Vote, but Few Have Signed Up

Winooski, Montpelier Will Allow Noncitizens to Vote, but Few Have Signed Up
By Chelsea Edgar
Politics
Councilor Gene Bergman (P-Ward 2) noted the other cities' legal victories before casting his vote in support of Burlington's proposal.

"This is something that has also passed muster in the superior courts of the state of Vermont," he said. "I am confident that it is a both a legal and an appropriate political step to take."

Earlier in the meeting, councilors learned that the opening date for the Elmwood Avenue shelter pod community has been pushed from this month to January, a delay that comes just as cold weather is rolling in.

Mayor Weinberger had proposed building the shelter community as part of a 10-point plan announced late last year to address housing shortages and end chronic homelessness before 2025. The project consists of 30 small shelters outfitted with heat and electricity, plus showers and toilets in a separate modular unit.

Samantha Dunn, who is overseeing the project as assistant director of community works at the city's Community & Economic Development Office, told councilors on Monday that the manufacturer of the modular unit is facing "severe supply chain and labor shortages that have impacted their production." Five additional shelters, built by local company Up End This, are also behind schedule.

Dunn said the structures should be delivered before Christmas with an estimated opening in early January. She acknowledged that her original November timeline was "overly optimistic."

Burlington Takes Aim at Ending Homelessness With 'Shelter Pod' Community
By Courtney Lamdin
City
The shelter project has faced delays from the start. Plans to open in July were delayed when the city couldn't find a partner to manage the site. In September, the city found a match in affordable housing developer Champlain Housing Trust, whose CEO, Michael Monte, estimated then that the shelters would be operational “before the holidays.”

Councilor Joe Magee (P-Ward 3) said he's concerned that the project will open when winter is well under way.

"It's imperative that we find solutions to meet the basic needs of our unsheltered community members between now and January," he said in a statement to Seven Days. "I am grateful for the continued work of the CEDO team to get the Elmwood Shelter open, and I will continue to support them in that work going forward."

Once the shelters open, guests will be housed for six to eight months while caseworkers help them locate long-term housing. In a memo to councilors, Weinberger wrote that the city is working on plans to open a permanent affordable housing project on the lot once the shelter project ends in three years.

The mayor also highlighted other steps the city has taken to help vulnerable Burlingtonians, including hiring a special assistant to end homelessness and using federal funds to increase staffing at the region's coordinated entry program. The system helped more than 100 households find permanent housing between May and October, officials said.

Other housing initiatives in the mayor’s 10-point plan include zoning changes to increase student housing on the University of Vermont Trinity Campus and expand residential development in the city’s South End. The Planning Commission is currently vetting both proposals, which will go to the council for a vote in January.