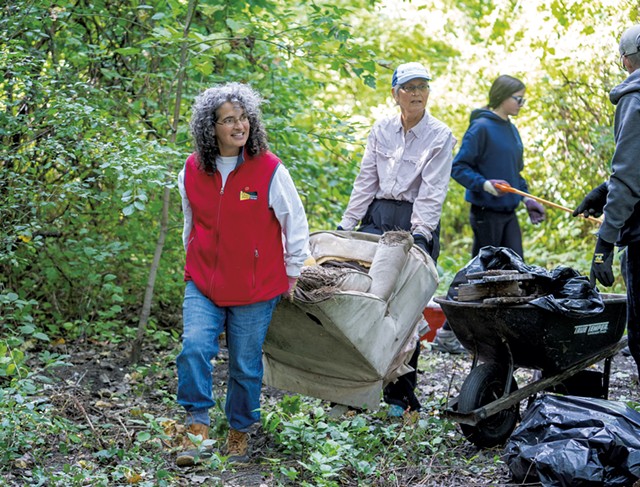 To mark Rosh Hashanah, the Jewish New Year, more than two dozen Vermont residents got together in Burlington on Sunday to remove trash from the Pine Street Barge Canal, a Superfund site on the shore of Lake Champlain.

With Tashlich, Jewish people perform an ancient ritual of casting off the past year's sins, often by throwing bread crumbs or pebbles into a body of water. Tashlich has been reinterpreted as an opportunity to clean polluted bodies of water; Jewish people in nearly 250 communities around the world are taking part, Siegel said.

Siegel recently got on her bike to search for waterways that needed cleaning.

"I'm always looking for social action and social justice things I can do through the Jewish community," said Siegel, a retired teacher.

She was amazed to see how clean Burlington's beaches were, she said. But she knew there was plenty of work to be done at the Barge Canal, which was once home to a coal gasification plant. Workers dumped coal tar, cyanide and other contaminated residue there for years. More recently, residents of homeless encampments left trash on the land.

On Sunday, members of Ohavi Zedek Synagogue, Temple Sinai and Congregation Ruach haMaqom — and some volunteers who aren't Jewish — picked up tents, tarps, an upholstered chair, clothing and personal items. One volunteer was designated to pick up discarded needles. The group filled between 40 and 50 garbage bags that the Burlington Department of Public Works agreed to remove, Siegel said.

"For me, and for many of the Jewish people I know, social justice is a huge element of what it means to be Jewish," Siegel said. "Doing projects that make the world better is how I choose to experience my Judaism."

The Barge Canal has been the site of many cleanups over the years. The next — organized by the Friends of the Barge Canal — is scheduled for October 16, from 10 a.m. to 1 p.m.