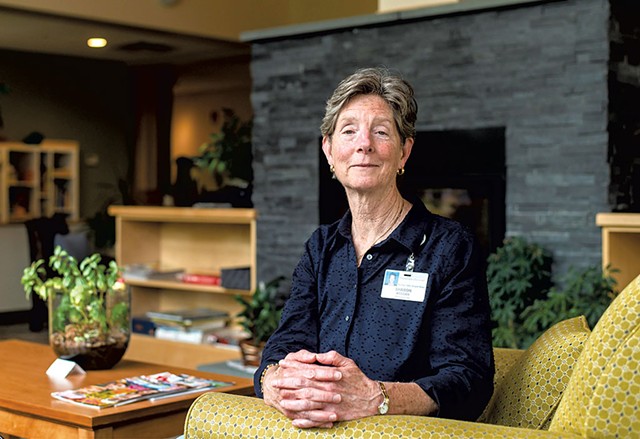 Volunteers organized to create the McClure Miller Respite House back in 1991. Thousands of terminally ill people have since lived their final days in the homelike setting of a hospice that has become a beloved Chittenden County institution.

Although the 21-bed nonprofit in Colchester still benefits from plenty of free labor, it's no longer a stand-alone organization. For the past 22 years, the Respite House has been operated by what used to be known as the Visiting Nurse Association of Chittenden and Grand Isle Counties, which, in 2018, affiliated with Burlington's sprawling hospital group and changed its name to the University of Vermont Health Network Home Health & Hospice.

Now there are fears that more than monikers are changing at the Respite House due to the growing influence of the big health care group that oversees it. This spring, after 18 years serving as its public face, Sharon Keegan learned that her days were numbered there. Although her house administrator position is the sole job being cut at the hospice care home, it's one of 10 the agency is eliminating across its operations to reduce a $2.5 million budget shortfall.

News of Keegan's termination, announced publicly last month, did not go over well with many of the Respite House's 200 volunteers, who do everything from bake cookies to wheel residents through gardens blooming with irises and begonias.

"Everybody thought it was a really, really dirty thing to do to Sharon," said volunteer Mary Post of Essex Junction, who quit last week in protest. Post is also worried that plans to officially designate a wing at the Respite House for higher-skilled nursing care will make the environment less homey. Volunteers call the individuals they care for "residents," not patients.

"People are afraid it's going to change the whole soul of the place. It's going to be an institution; it's just going to be like the hospital. That's the fear," Post said.

Her husband, Bruce Post, an occasional volunteer, called Keegan's termination "the worst decision since the Red Sox sold Babe Ruth to the Yankees."

The Posts aren't the only volunteers who are upset. Letting Keegan go is a mistake "beyond any reasonable explanation," said volunteer Charlene Young of Jericho. "To say I'm disappointed" would be an "understatement."

Now that the Respite House is part of the UVM Health Network, "I'm very, very worried that they will lose their identity," said Young, a retired medical assistant and secretary at UVM Medical Center. "They need to remain as independent as they possibly can."

In an interview with Seven Days last Thursday, 62-year-old Keegan expressed appreciation for the support of her volunteer colleagues but seemed resigned to her fate. If it's what the administration had to do, then so be it, said Keegan, who plans to go on a meditation retreat when she leaves her post in July.

"It's just a privilege," she said about her tenure at the Respite House. "It's a deep human privilege to be able to be with humans who are dying, and their families."

Keegan's job has been to meet with families and friends of prospective residents, then facilitate their admission and care. She trained many volunteers, and then trainers of volunteers. She comforts both the residents and their grieving loved ones.

To let her go is "a real kick to the stomach," said Mary Post, who joined many other volunteers at a June 4 meeting at Home Health & Hospice's administrative building in Colchester. Philanthropists Bob and Holly Miller also attended the emotional gathering about cost-cutting measures. The couple has given at least $4 million to the Respite House — enough to share naming rights on the building with Warren and Lois McClure.

According to numerous accounts, Bob Miller offered to personally pay Keegan's salary, if she would agree to stay on. That would cost roughly $100,000 including benefits, he estimated. Keegan was not at the meeting and later politely declined.

"We wanted to make sure that we didn't lose some of the volunteers if they said, 'Well, without Sharon, we're leaving,'" Miller explained. "Because she's been a big part of the organization for the last 10 or 15 years."

But Miller, who owns a construction company, isn't opposed to some cuts and restructuring at the Respite House.

"Typically, nonprofits operate from the heart and not from the pocketbook," he said. The administrators "are addressing the situation that they've got in front of them." He added, "I'd rather see them do that than go down the rabbit hole."

Fears that Keegan's departure will change the character of the Respite House are unfounded, said Judy Peterson, CEO and president of Home Health & Hospice. 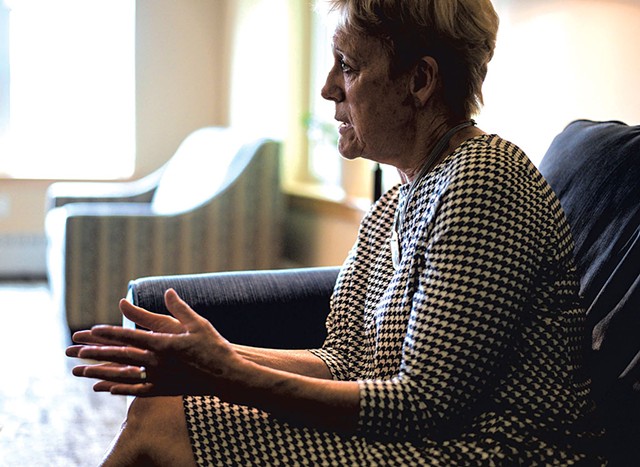 Despite affiliating with the UVM Health Network, a growing consortium of hospitals, the Respite House will operate as it has, but with seven beds specifically designated for people who need higher-skilled nursing care, Peterson said.

The facility is already serving such residents, but they are scattered through the building — an inefficient setup for nurses, according to Peterson. Further, designating the beds will help the bottom line, because Medicaid and Medicare reimbursements are much higher for patients in the care of registered nurses than those tended by aides.

On average, it costs $828 per day to stay at the Respite House.

Currently, "The reimbursement system does not support the care that we're providing," Peterson explained.

That means the facility is operating in the red. Fundraising helps cover shortfalls, but the current gap is large and must be addressed, Peterson said: "We just don't feel that's sustainable going forward."

Agency-wide, 10 full-time equivalent positions will be cut by October 1. Due to retirements, only about seven people will actually be laid off, according to Peterson — most of whom are in administrative positions. The organization's private care program, which offers in-home care not covered by insurance, is being eliminated entirely. Because for-profit companies now offer similar services, Home Health & Hospice doesn't have to. The 21 employees affected, who work per diem as caregivers, have all been offered other jobs at the agency, Peterson added.

"These have been very, very difficult decisions," said Peterson. She added: "We understand why some of the volunteers are distraught."

The original Respite House was located in Williston and had room for 12 residents. The founders wanted to offer both short-term stays as a respite for caregiving families and a place where terminally ill patients could die in a comfortable setting.

The VNA partnered to provide care to residents from the beginning, and in 1997 the home health nonprofit acquired the house. Demand grew, and in 2016, the VNA opened its current $7.9 million Respite House off Roosevelt Highway in Colchester.

To qualify for admission, residents must have a dire medical prognosis: less than six months to live. Around 95 percent of those who come to the Respite House die there. Occasionally, because of the exceptional care, residents improve and return home.

During the past month, the average length of stay was nine days.

Last Thursday, preparations for dinner were under way in the tidy kitchen next to the living room, where big couches face a large gas fireplace. An employee pushed a resident in a wheelchair down a warmly lit hallway. Although carefully designed to be handicap accessible, the passageways look more like hotel corridors than floors on a hospital. Ambulances come and go, but so do volunteer choir singers and loved ones bringing the family pet for a visit.

While volunteers are crucial, the administrators who run the Respite House and 10 other programs are paid well. Home Health & Hospice had at least seven execs pulling down six-figure incomes in 2016, its most recent Form 990 IRS filing shows. Peterson earned total compensation of $270,679, including a $20,000 bonus.

Peterson said there will be no pay increases for the executive team in next year's budget, fiscal year 2020, which starts in October. Raises for other employees will average around 2 percent.

UVM Medical Center CEO John Brumsted responded last Friday to a request for comment about the cuts with a written statement.

"Like many health care organizations, it is necessary for UVM Home Health and Hospice to make changes and evolve the way they deliver care to ensure they can be strong and sustainable into the future," it said. "This work can sometimes require difficult, but important decisions. I know that Judy, her leadership team and their board of trustees are all fully committed to doing what is right for their patients."

Mary Post, the volunteer who once worked at the UVM Medical Center, doesn't buy it.

"As a former employee of the big gorilla, I am not going to work for free for them,'' Post said. "As far as I'm concerned, they can just give people jobs. Pay them."