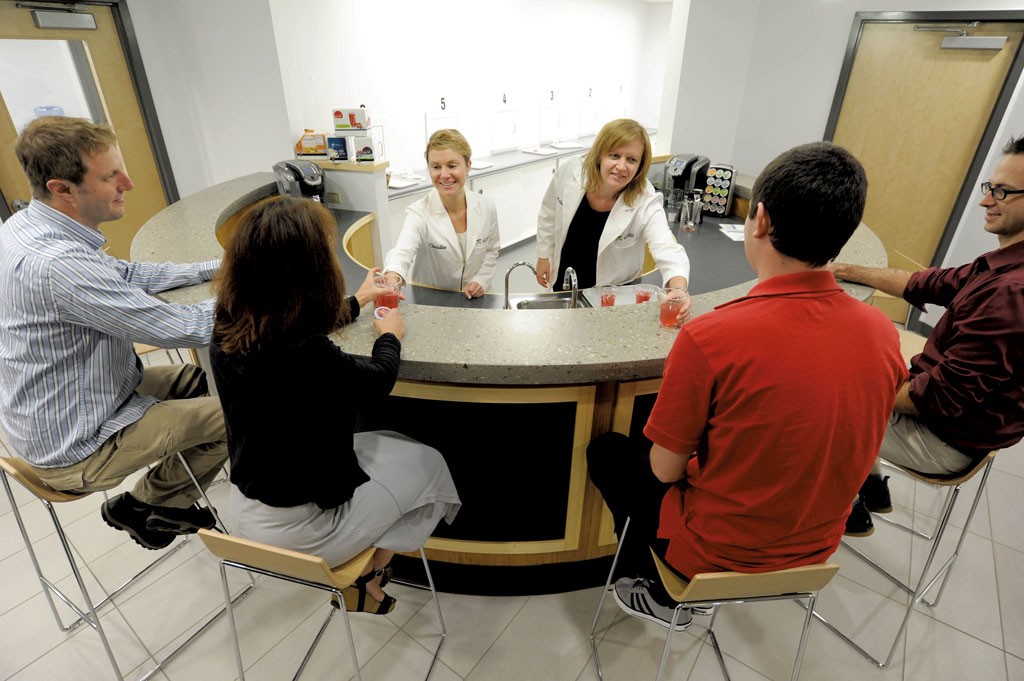 According to Tom Novak, 15 percent of American homes have one thing in common: a Keurig brewer. This may sound like a staggeringly high number to some, but the senior vice president of beverage research and development and regulatory affairs at Keurig Green Mountain isn't satisfied. "Ninety percent [of households] have coffee brewers," says Novak. "We have a long way to go."

In a few years, these plans could take an Orwellian turn with the addition of connectivity in the machines to allow the company to see how customers are using them. But until then, Keurig is relying on its neighbors to learn what customers like to drink.

In recent weeks, ads have run in this paper and on local radio asking, "Have you got good taste?" Members of the public are invited to the company's secretive sensory testing HQ to see if they qualify to join the current 300-strong roster of locals who taste Keurig beverages for half an hour to 45 minutes twice a month in exchange for a $15 Amazon gift card at each session.

What exactly qualifies as good taste? Pregnant and lactating women, as well as diabetics, are eliminated from testing sometimes-sugary beverages. "If somebody says 'I'm tightly controlled,' we can't do it. It's too much of a risk," says Laurie Lucchina, senior manager of research and development and the leader of the sensory evaluation team. "Plus, they taste differently."

Lucchina's doctorate and post-grad background are in neuroscience and sensory science. When she couldn't find a tenured track at an East Coast university, she entered the corporate sensory world, with jobs at Gillette and Unilever. Since moving to Vermont three years ago to join the Keurig team, she's lived in her grandmother's Barre farmhouse. "It's like 'Green Acres,'" she jokes, referring to the 1960s sitcom. "It needs a lot of work."

Sensory science researchers Moira Kelley and Melissa Gorham have been trained to moderate consumer product testing, including taste (Keurig calls this "qualitative research"). Kelley's background includes sensory evaluation at Ocean Spray just outside of Boston — another past employer of Lucchina's. Gorham, a New England Culinary Institute grad and former chef, has been climbing the Keurig ladder for a decade. Before beginning in sensory evaluation last year, she was hospitality operations manager at the company's café; in the former Waterbury train station.

About 80 percent of the community members who apply to be tasters pass muster. Those 20 percent who aren't eliminated for medical reasons have proven to be colorblind or failed the smell test.

During the test, sensory science researcher Christine Thompson hands out booklets created by the University of Pennsylvania. The cardboard book is filled with scratch-and-sniff panels. Those being tested must determine whether each brown rectangle smells like pizza or petrol, chocolate or grass. It can be difficult. This reporter guessed "apple" for a scent that turned out to be strawberry. The fragrance is so artificial that it doesn't smell much like anything in nature.

Lucchina, trim in a floral dress under her lab coat, says that many of the testers who aren't chosen for tasting do participate on other panels. Around the corner from the sensory testing area is a conference room with a two-way mirror, just like in the movies. There, marketing staff or product developers may watch as Kelley and Gorham moderate panels discussing packaging and other aspects of branding not related to flavor.

The 80 percent who become part of the testing group are mostly between ages 40 and 60, including a good percentage of retirees. Gorham says she hopes to change this by advertising to a younger demographic. There is one factor that unites the testers: a love of the brand and curiosity about how its products are made, she adds.

Though testers are purposely kept somewhat in the dark about the products they're testing, they're expected to have a modicum of facility with the language of taste. With her psychological expertise, Thompson is especially helpful in drawing out descriptions. "They can't just say, 'I prefer it because it tastes good.' They have to be creative and elaborate," says Lucchina. "What does it look like and what does it taste like? Is the aftertaste pleasant or unpleasant?"

Whether they're retired or coming in during lunch breaks from work, panelists take their duties seriously. "This is their job, to be product development," says Lucchina.

Part of that job includes signing a confidentiality agreement. "It's a small town, and we may not launch some of these things for five or six years," Lucchina explains.

(Seven Days doesn't sign the agreement, which bans disclosing information about what goes on between those walls on a hill in Waterbury even "to members of your family and/or household...")

The panelists' families and friends may never know, then, that before each session, a team member must let them in to the always-locked building. They enter into the sensory testing waiting room. The only thing distinguishing that area from a doctor's waiting room — it's dominated by a magazine carousel filled with dog-eared issues of Allure, Birds & Blooms and MIT Technology Review — is the posted statements about confidentiality, and reminders against wearing any scented products on testing days. Fragrant shampoos, hairsprays or lotions, not to mention perfume, can interfere with evaluation.

When Thompson and other technicians are ready with different concoctions, testers are led to the testing room. Painted white and filled with cubicles isolating participants from each other, each desk area is stocked with a computer. It's almost identical to a DMV testing area, but for tiny windows that open from the other side — the lab where the team prepares its tastings.

Thompson opens the closed window and, through it, presents a tray filled with two unsalted crackers, a glass of water and two different versions of Keurig's Café Escapes brand's Café Caramel drink.

Instead of the computer, I am given a simple sheet of paper with just two questions for each sampling: "Which sample did you prefer?" and "Of the sample that you chose, how much did you prefer it?"

Thompson carefully labels each glass with the proper identification number. She asks that the participant drink at least half of each glass, and to take some time. The beverage can taste different at varying levels of heat. After each tasting, panelists are expected to cleanse their palates with a bit of cracker and a swish of water. Then Thompson replaces the glasses of caramel with another set of two, one slightly more bitter than the other.

Through a series of six, the differences are minute. That's because the testers are trying to hit the most agreeable balance, getting levels of sweetness and creaminess just right. Real-life panelists are more likely to test 10 to 30 different beverages in a day's work. Keurig also conducts more casual tastings at ski mountains, stores and, soon, Big 10 football games.

My six are prototypes of a product that's already on the shelves. In the actual tastings, the roughly 100-person R&D team is testing a series of hush-hush debuts. A deal with Campbell's announced last year means soups will soon join the 275 beverages sold by Keurig. According to director of community relations and corporate communications Sandy Yusen, a debut date for the soups is still forthcoming. But testers in Waterbury have doubtlessly tested them, as well as cold, Coca-Cola-branded beverages that will be available for the Keurig Cold system next year, the company's answer to the SodaStream.

Though the Keurig crew is tight-lipped about the collaboration with Coca-Cola, Lucchina does let slip that testers must be able to tell the difference between diet and regular sodas. A preview of what's to come?

Following the mock evaluation, members of the R&D team and Yusen convene outside the lab to taste a few recent releases. Dattatreya Gajula, a native of Hyderabad in South India, is the team's tea guru. He was the force behind formulating the Coffee Bean & Tea Leaf imprint's ultra-floral jasmine green tea and Darjeeling black tea with its notes of honeysuckle. But Novak also describes as Gajula's "baby" Keurig's tangy version of peach Snapple iced tea, which is brewed at 190 degrees and cooled over ice.

Measurement science technician Kelley, who has a topknot of curly red hair, formulated a limited-time caramel apple cider from Keurig's Green Mountain Naturals brand. Using dried apple pomace, the cider tastes as real as it sounds. But the addition of round, buttery notes that suggest apple crisp make the drink addictive. According to Kelley, this was achieved with careful testing of 25 different butterscotch and caramel flavorings. "It was really tough," she remembers. "But it was a great project."

Of course, flavor isn't the only aspect of research and development. With Keurig Cold still in testing phases, the company employs experts in ceramics, engineering and a variety of other sciences to perfect the technical aspects of new products.

Pete Peterson, a chemical engineer whose résumé includes designing the drying technique for Craisins, now leads shared services for hot and cold beverage R&D for Keurig. He compares the national supremacy of Keurig to the local growth of the Vermont microbrew. "We like to think that we're creating a beverage revolution," he says.

So when will Keurig introduce its own line of beers and spirits? "People can customize their own beverages," Peterson says with a smile.

The original print version of this article was headlined "Sensory Science"