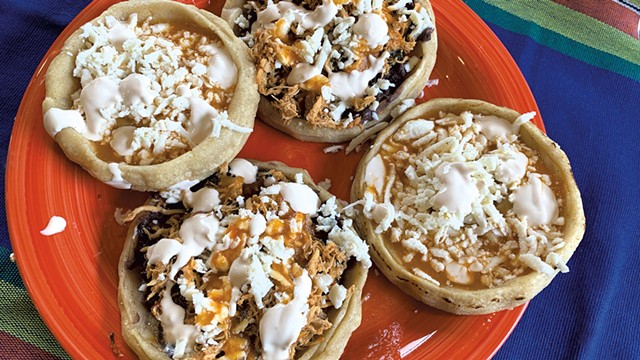 With hands swooping like butterflies, Matilda Fuentes and Magnolia González deftly patted, pinched and folded masa dough. In a Middlebury kitchen on an early July afternoon, Fuentes was making empanadas filled with chicken while González shaped small, thick rounds of masa with raised edges for pellizcadas.

The two women were preparing dishes from their native state of Veracruz, Mexico, in the home of Middlebury College professor Gloria Estela González Zenteno and her wife.

González Zenteno, who served as translator, explained that "pellizcada" means "pinched" in Spanish. It is the regional name for what people in other parts of Mexico call gorditas or sopes: griddled cornmeal cakes that serve as sturdy, edible saucers for toppings such as beans or meat.

"When I'm cooking, I see my mother with me." Matilda Fuentes tweet this

González Zenteno, 58, grew up in Guadalajara in the Mexican state of Jalisco and came to the United States as a graduate student in 1988. Hers "was a different path" from those of the cooks in her kitchen, she said with some understatement.

Fuentes, 47, has been in the U.S. 20 years and arrived in Vermont six years ago. She initially worked on a Bridport farm "feeding calves and feeding people" and now lives in Addison with her two children.

González, 35, lives in Panton with her dairy farmworker husband and their two children. She has lived in Vermont for 13 of her 14 years in the U.S. Like Fuentes, she has made money cooking for the many farmworkers who are here without their families. 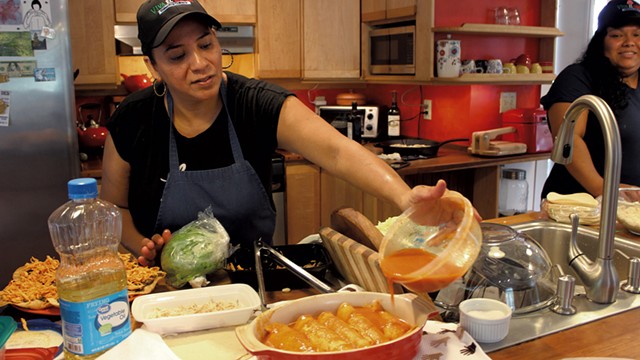 Fuentes and González shared their stories over several hours of cooking, eating and talking, punctuated by much laughter and some tears. They discussed their journeys to Addison County, how food ties them to faraway kin and how they believe culinary skills can empower women.

Theirs are but two stories from a 13-member Addison County culinary collective called Viva el Sabor ("long live flavor") that launched on June 26 with a pop-up dinner on the Marble Works green in Middlebury. Twelve of the cooks are from Mexico and one is from Guatemala; all but one are female. "Everybody has a story," González Zenteno said.

The organizers of the June event anticipated 250 attendees, bought plates for 500 and lost count after about 1,000. Lines snaked through the parking lot for hours. But a mariachi band entertained everyone, and the cooks had enough tamales, tacos and gorditas to satisfy all.

"It was a very beautiful experience. We did not expect that many people," González said, beaming. "I was imagining myself as a little old lady telling my grandchildren."

Local chefs, businesses, a church, the regional culinary arts program and dozens of volunteers — including González Zenteno — donated their time, kitchen space and equipment to the inaugural event.

The goal of the pop-up was to gauge Vermonters' taste for the food that Viva el Sabor members cook for their families and fellow Latin Americans. As hoped, the event generated leads on catering opportunities and events for which the members could cook. It also served as a testing ground for some of the cooks. 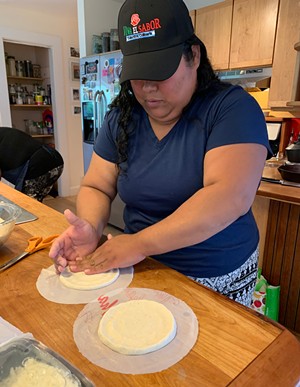 "We all have a gift from God, which is knowing how to cook well," González said. Some members, though, had less experience than others in cooking for hire.

"Now, they have confidence in themselves," she said. "[And] now that we have that confidence and hope, it won't just be one event. One day maybe we can set up a restaurant. Sí, se puede!" she concluded resolutely.

Cooking is deeply woven through Fuentes' and González's memories, as is masa, the cornmeal dough that is central to many regional Mexican cuisines.

González started rolling tortillas by hand for her family when she was 7. Her grandfather favored her "small and dainty" tortillas over her grandmother's, she said. A cousin would tease his mother that, in comparison to González's tortillas, hers were "for dogs."

"I told them I had a tortilla press, and [Fuentes] said, 'A tortilla press is for lazy people,'" González Zenteno interjected with a laugh.

By the age of 13, she was selling food in the courtyard of her family's home on their town's busy main street. She offered plates of fried pork skin (known as chicharrones), dressed with shredded cabbage or lettuce, queso fresco, a drizzle of cream, and Valentina hot sauce.

Fuentes' childhood was more turbulent. At 6, she was responsible for hauling the family's nixtamalized corn to the mill to be made into masa. She recalled seeing her father — a womanizer and a drunk, she said — there with another woman.

Though her father had a steady job, his children went to school without underwear. His explosive temper sparked regular beatings with his belt and the branches of a tree known for not bending. But his worst trait, Fuentes recounted, was that "we couldn't eat until he came home — no matter how late."

When the family moved for a few years to central Mexico, where Fuentes' father worked at a cattle research center, her mother saw an opportunity. The international scientists at the research center appreciated her cooking and paid her to do it for them.

"My dad would say, 'You eat, thanks to me.' My mom would say, 'No, now I'm making money, I'm feeding the kids,'" Fuentes said with satisfaction.

"My childhood was very sad but also beautiful," she reflected. "It taught me how to appreciate so much."

Both women learned to cook at the elbows of their mothers. Whenever Fuentes asked her mother how to cook something, "She would say, 'Don't ask. Watch,'" Fuentes recalled.

Gesturing to the table spread with food, she said the flavors take her home: "When I'm cooking, I see my mother with me."

While recipes can cross borders, family is most often left behind. It is excruciating to be so far from loved ones with no idea when you will see them again, González said. With tears and a torrent of Spanish, she explained how multiple members of her family have been kidnapped for ransom because they have relatives in the U.S. who are earning more money than they could in Mexico.

An uncle was kidnapped twice. A cousin was shot in the foot to prevent his escape but still managed to get away. González's sister was not so lucky. She was killed in a botched kidnapping, González shared through sobs. Her father cautioned her not to come home for the funeral.

González's 11-year-old daughter, Jossy, who had tagged along for the cooking demo, rushed over to hug her mother.

Was coming to the U.S. worth it? "Sí," González answered a reporter without hesitation. "I think of them," she said, referring to her daughter and 14-year-old son.

Her husband first made the arduous journey over the border to find work at the age of 18. After they married in Mexico, she decided to join him while seven months pregnant with their son, narrowly escaping arrest on the way.

"That was the best option you ever took," Jossy told her mom with a big smile.

Like González, Fuentes settled initially in Florida, but she came alone. She decided to leave Mexico, Fuentes said, "for necessity. I didn't want to depend on a man."

She supported herself by cooking in restaurants in Orlando, Kansas and North Carolina before moving to Vermont. A cousin working on an Addison County dairy farm had told her that her cooking would be much appreciated there, and she was eager to work for herself. The problem with restaurants, Fuentes said, "is they treat you so terribly, and the hours are so long."

The two women agreed that Addison County has been a good place for them, offering strong support for their farmworker community. "You can become known. You don't have to be hidden," Fuentes said.

The positive response to Viva el Sabor reinforced that feeling. Little Village Enterprises will offer support and training to members of the collective so they can meet food safety and licensing requirements, as well as navigate the legal and financial needs of food-related entrepreneurial ventures.

Members will also learn from one another. "This experience is teaching them to collaborate," González Zenteno said. "They are fiercely independent. They survive and thrive on their independence."

The cooking part they have down pat, deliciously evident in the early July demonstration feast of tostadas, enchiladas, empanadas, pellizcadas and tacos dorados.

González cooked the black beans that both women used in their dishes. Fuentes added minced purple onion, which she likes for its stronger flavor.

For the chicken filling, she boiled breasts with onion, garlic and bay leaf, then fried up tomato, onion, garlic, dried oregano, bay and thyme to combine with the shredded meat and cilantro. "Sometimes to add color because the tomatoes are pale here, I add Goya Sazón," she said, referring to the commercial seasoning.

Fuentes explained how she made the addictively spicy salsa: by frying dried morita chiles with a lot of garlic before blending them with a little water, salt and bouillon. Then she fries the mixture again "very carefully because it jumps," she said, describing how the heat makes the ingredients spit.

A phone call interrupted the conversation. It was Fuentes' 10-year-old daughter asking her mother to bring her home some food — but not from the spread on the table.

"She likes pizza," Fuentes said with a shake of her head.