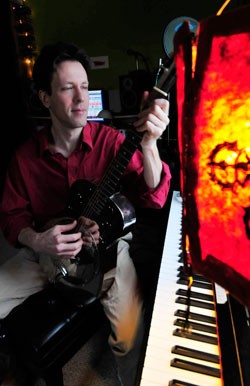 Think of a recording studio, and chances are you’ll envision banks of technology, an engineer in headphones and one or more musicians doing their thing behind a sheet of glass. What you probably won’t imagine is the Green Room, the cozy, post-and-beam nook in the woods of East Montpelier. There, on a morning in early February, producer Colin McCaffrey is coaching singer-songwriter Jeff Hahn through some vocal tracks.

The room itself feels like a kind of instrument, carved of wood and resonant. A harp stands in the corner next to a Dobro and an upright bass; an acoustic six-string hangs on the wall above. Warm light filters in through the windows and makes the surfaces of the instruments glow. More important is not the place, but the music that happens within it.

Hahn’s voice, accompanied by a parlor-size Guild acoustic, is a certified wonder, a trembling ache of an instrument suffused with human emotion. It’s McCaffrey’s challenge to translate that vocal beauty to digital. Relaxed and assured, he seems perfectly suited to the task.

“How do you feel about that mic as far as your voice?” McCaffrey asks. “Because you got a really cool gritty thing, and this mic is definitely capturing a lot of that. But I’m wondering about maybe a ribbon mic, to see if we can get almost a more old-fashioned sound.”

There’s no pressure implied — just an honest commitment to getting it right. McCaffrey has an ear, and Hahn knows it. You know it, too, if you’ve heard any number of albums McCaffrey has produced for Vermont musicians over the past decade — Justin Levinson, Susannah Blachly, Lizzy Mandell and the Beerworth Sisters, to name a few. And as time passes, you’ll likely hear more. McCaffrey’s sublime studio work has made him a go-to producer for Americana musicians across the Green Mountain State.

McCaffrey, 44, grew up in southern Vermont, playing
classical violin in his early years and rock and roll as a teen. He graduated from Boston’s Berklee College of Music with a degree in composition and then moved back to Vermont, where he quickly fell in with the Americana scene, playing bass and guitar and adding his vocals to the mix. He soon became an in-demand session player for recording projects in folk, country, bluegrass, swing and jazz.

“And as I did that, I started watching over the shoulder of the Pro Tools guy,” he explains. “And I thought, I could do that.”

In 1996, he bought his first Mac rig and Pro Tools recording software and began tracking. Once people heard what McCaffrey could do at the control panel, they started asking him to produce their records. Hahn is just one of many who’ve found their way to the Green Room over the last several years.

The ribbon mic set up and ready, McCaffrey pauses to take a closer look at the tune’s lyrics. Before long, he and Hahn begin to tinker, massaging a line to correct a flaw in rhythm. A gifted songwriter himself — he was the winner of a 2012 USA Songwriting Award for his jazz tune “Old Porch Swing” — McCaffrey often puts his skills as a lyricist to work for clients. But songwriting is just one part of a bigger picture.

“There’s a lot of good engineers in the area, a lot of people doing good work. But I think it’s a musicality thing,” says producer Chuck Eller about McCaffrey. The two have frequently collaborated, and Eller plays keyboard in McCaffrey’s Americana band the Stone Cold Roosters.

Justin Levinson concurs. The Burlington musician hired McCaffrey to produce his 2012 album This Side of Me, This Side of You and his 2013 EP Take My Time.

“It’s like he’s scored out the whole arrangement in his head before he’s even picked up [an] instrument,” Levinson says. “He will pick up one instrument and play the part, and it won’t sound like very much. And he will pick up the next one and layer it over, then do another one. “Before you know it, he’s done 10 different string tracks, and it sounds like an incredible orchestra. It’s pretty amazing.”

McCaffrey’s musicality extends to his singing and playing as well. His voice, a rich, expressionistic tenor likened by local critics to that of James Taylor, has found its way onto any number of records. So has his top-shelf instrumental work — from jazz and bluegrass guitar to bass, mandolin, fiddle and cello. What that track record does not convey are two other assets: McCaffrey’s easygoing demeanor and his unpretentious approach to production.

Myra Flynn describes reluctantly sharing the tunes that later became the McCaffrey-produced Crooked Measures, her 2009 debut record. She had been a member of the cover band Spark but felt nervous about making the leap to recording and performing her own songs.

“He couldn’t believe that I didn’t think they were any good; [he was] just so supportive and cool about that part of me coming to life,” Flynn says. “And not much has changed. He is one of the most supportive, mentoring individuals in my life.”

At the center of all this sits McCaffrey’s production philosophy: He doesn’t try to make the record he wants. Instead, he works to create a sonic universe that allows an artist to shine.

A few more takes in the bag, Jeff Hahn packs up his guitar and puts on his coat. After writing McCaffrey a check for the session, he heads out into the snow. No sooner does the door close than McCaffrey sits down in front of his Mac, Pro Tools at the ready, to zone in and listen. There’s a jewel in there somewhere, and he’ll do his best to find it.

The print version of this article was headlined "Tracks in the Woods".