Vision Quest: A Waterbury-Based Project Brings Eyesight to the Blind

Eyesight for the blind was once a messianic promise. This week, assembly-line cataract surgeries will restore the vision of 1,200 Ethiopians over eight days, courtesy of Waterbury's Himalayan Cataract Project.

The work qualifies as a miraculous undertaking, asserted ophthalmologist Geoff Tabin. "We're restoring not just sight, but life," he said.

In 1994, eye doctors Tabin and Sanduk Ruit established a small clinic to perform low-cost cataract surgeries in Kathmandu, Nepal. More than two decades and 567,000 eye operations later, HCP is strategizing ways to take on a challenge of near biblical proportions: to restore sight to 18 million people with curable blindness around the globe.

On Monday, Tabin and a team of local doctors set up shop in Mekelle in northern Ethiopia, where patients had gathered from around the region. In one surgery after another, Vermont-trained Tabin will inject a local anesthetic and cut a tiny, self-sealing incision in the eye wall. He'll remove the cataract, easing out the hard protein deposits that have formed behind the iris, insert a clear plastic intraocular lens and bandage the eye. The surgery, which costs $25 per eye, lasts all of seven minutes.

Not surprisingly, the pair of eye doctors operating in far-flung locales has attracted plenty of media attention. Over the decades, their Himalayan Cataract Project has been featured in a slew of national and international publications. A "60 Minutes" segment is scheduled to air before the end of the year.

The coverage has focused on the uncompromising dedication of the founders: Tabin and Ruit perfected a simple surgical procedure and brought it to more than 6.6 million patients in a dozen countries in Asia and Africa. They send out community workers to round up the afflicted and guarantee treatment regardless of a patient's ability to pay.

The post-op footage is pretty compelling, too. In a video from an Ethiopian clinic, delight borders on hysteria as nurses strip eye bandages from the faces of hundreds of patients, one by one. They blink, dazed, at their first glimpses of sunlight in years. Patients whoop and clap, embrace loved ones, and throw their arms around the nurses.

He contends that the procedure is "definitely the most cost-effective surgery" in the world. On the day after, 80 percent of patients can see well enough to pass an American driver's test. Studies have shown that HCP's $25 cataract operation has the same success rate as that of the $1,200 ultrasound one used in the U.S. — 99 percent.

Tabin and Ruit crossed paths serendipitously and found themselves united by a shared desire to improve lives in every corner of the world.

Born in Olangchung Gola, Nepal — one of the most remote villages in the country — Ruit worked his way up from poverty, attending school in India at age 8 and eventually gaining admittance to prestigious medical schools in India and Europe. When Ruit surveyed Nepal in 1989, not a single ophthalmologist was performing cataract surgeries in the country of 24 million people.

Tabin, who holds degrees from Yale, Oxford and Harvard, met Ruit while he was trekking in Nepal. He had already climbed Mount Everest and become the fourth man to crest the highest peak on each of the seven continents. A thrill seeker, Tabin also held the singular distinction of participating in the first-ever bungee jump. 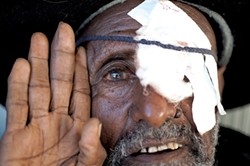 The doctors' partnership started badly: When Tabin first offered to help Ruit, the Nepalese ophthalmologist sent him to one of country's most inhospitable regions during the monsoon season, certain that the heat and insects would weaken his resolve.

But Tabin persisted and eventually won Ruit over. From the start, the two focused on making the operation affordable for the poor. But, regardless of income, "Everyone pays something," Heintz said.

Ruit had already developed and simplified the cataract surgery routine, but he couldn't reduce the cost of the intraocular lens — at $200, it was far out of the price range of most Nepalese patients.

So when the pair started Tilganga Institute of Ophthalmology in 1994 in Nepal, it included a lens factory. The institute designs and produces intraocular lenses for between $2.50 and $5 — "with no dip in quality," Heintz clarified. The eye center has since evolved into a 33,000-square-foot facility, complete with a training center, surgical suites and clinical offices.

The HCP, the American partner and benefactor of the organization, was "born out of the rib of Tilganga" the following year, Heintz said. It grew slowly. When Heintz came on as the first employee in 2003, Tabin still "ran it out of the back of his Honda Civic in a cardboard box," Heintz recalled. They based the budding organization in Waterbury, not far from the University of Vermont Medical Center, where Tabin practiced.

The project first rented office space in the old Methodist parsonage on Main Street, and workers crammed into a single room for $150 a month. HCP's leaders pride themselves on keeping administrative and overhead costs around 10 percent — even now, with an annual budget approaching $10 million.

The organization, which has 11 staff members, operates with a combination of public funds, private donations and grants. Heintz noted that Sen. Patrick Leahy's (D-Vt.) work on the Senate Appropriations Committee led to more than $1 million granted through USAID last year to support the effort.

Tabin moved to Utah in 2006, but HCP has maintained its Waterbury headquarters. People know Tabin here, said chief operating officer Emily Newick. From the beginning, "There's been the legacy of a number of grateful patients that have been committed donors," she said. They include Vermonters Tabin treated when he was an ophthalmologist at UVMMC.

With the right support, Heintz said he believes that the organization is poised to repeat the accomplishments of the last 20 years — over the next five. The MacArthur Foundation recently launched its 100&Change competition to award a single grant of $100 million to be spent over five years. "Of course we applied for it," Heintz said.

HCP has the infrastructure in place to expand exponentially, Tabin said. As it has in Ethiopia and Ghana, HCP establishes itself in a country and builds partnerships with local NGOs or hospitals, or the government. The nonprofit trains and equips doctors and nurses to perform en masse surgeries, which lowers the cost per procedure.

It's a model that could work anywhere, Heintz said, even in the most inhospitable environments. "We've developed the systems to get to those places. It's now just a question of scale," he said. "This is a public health crisis we can win."