Viral Fishy Fright Flick 'What Lies Below' Has a Vermont Connection 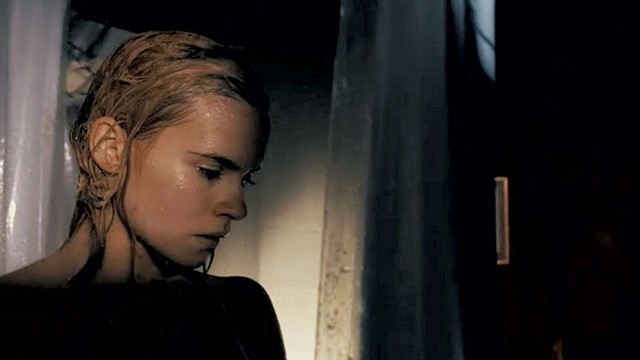 What is What Lies Below, indeed — besides having a title that makes it easy to confuse with the Vermont-shot thriller What Lies Beneath (2000)? As it happens, this 2020 film (on Netflix and rentable elsewhere) has its own Green Mountain connection: Writer-director Braden R. Duemmler is a 2007 University of Vermont grad. Though Duemmler shot the bulk of the film in the Adirondacks, he got some b-roll in Burlington with the help of current students, according to UVM Today.

I took a dive into this fishy phenomenon to see if it holds water.

Sixteen-year-old Liberty Wells (Ema Horvath) returns from archaeology camp to the news that her mom (Mena Suvari) is getting very serious about her new boyfriend. His name is John Smith (Trey Tucker), and he has the abs of an underwear model and the overbearing delivery of a novice Method actor. A beauty with a brain, John has installed giant tanks of lampreys in the basement of the women's lake house as part of his research into marine adaptability — which, he informs us solemnly, is vital in this time of climate crisis.

Libby is suspicious of John's too-good-to-be-true-ness, but he's clearly pumping out powerful pheromones, because she's also ogling him at every opportunity. When she glimpses John in town with a strange woman — or so it appears — she keeps it to herself.

Then John and Libby go boating while she's riding the crimson tide, and he reacts in a way that crosses the line from dreamy into über-creepy. Can she save herself — or her mom — from this ripped representative of the life aquatic?

If we live in an attention economy, Duemmler has hit pay dirt. Dozens of low-budget horror and sci-fi movies hit streaming services every month, and most of them disappear without a ripple. If What Lies Below has instead been written up in Newsweek, Slate and Entertainment Weekly, that's not a testament to its quality, nor is it a tribute to viral marketing à la The Blair Witch Project. Rather, I think, it's an indication of just how rigidly categorized and predictable our genre entertainment has become.

When you crank up Netflix and grab a random scary movie, there are certain things you expect, and a hunky guy rhapsodizing about lampreys and licking menstrual blood off his fingers is not among them. Nor are you prepared for an elliptical ending that no screenwriting manual would countenance.

Art film viewers might not blink at such provocations, but What Lies Below is no art film. It's shot with more competence than creativity, featuring the chiaroscuro lighting effects we expect from a spooky thriller. In the acting department, Horvath is a strong central presence, projecting a convincing mix of fear and attraction. But the awkward storytelling and dialogue don't feel meaningful or deliberate, and the ending isn't tantalizing so much as mishandled.

There's nothing unusual about a shaky narrative in this genre. But all the ways in which What Lies Below fulfills our expectations just make the ways in which it doesn't fulfill them stand out. And that standing-out has apparently made it worthy of lengthy exegeses on Reddit.

What Lies Below gets people's attention not because of its transgressive use of the "female gaze" — the tale that Duemmler has been cleverly spinning in interviews — but because it's just a bit genuinely weird, in a way we rarely see these days in B-movies. And a bit incompetent, and probably a lot lucky.

By calling your attention to it, I've already spoiled it, because this movie can't survive any degree of hype. It was made for people to half-watch at 3 a.m. and then wonder if they dreamed it. And if Duemmler reaps the benefits of their discovery, more power to him.

Under the Skin (2013; Showtime, rentable): For a genuinely arty execution of a premise similar to that of What Lies Below, try this cult fave in which Scarlett Johansson plays a too-good-to-be-true woman picking up men on the roads of Scotland. Better yet, read Michel Faber's source novel.

The Shape of Water (2017; Hulu, rentable): Or, if you're mainly intrigued by the fish-guy-sex theme, try the only Academy Award for Best Picture winner that's all about fish-guy sex (but with a ravishing visual texture!).

Serenity (2019; Amazon Prime Video, rentable): But if what you really want is a fish story so bad it's good, then you want this travesty of a noir starring Matthew McConaughey as a deep-sea fisherman and Anne Hathaway as the one who got away.