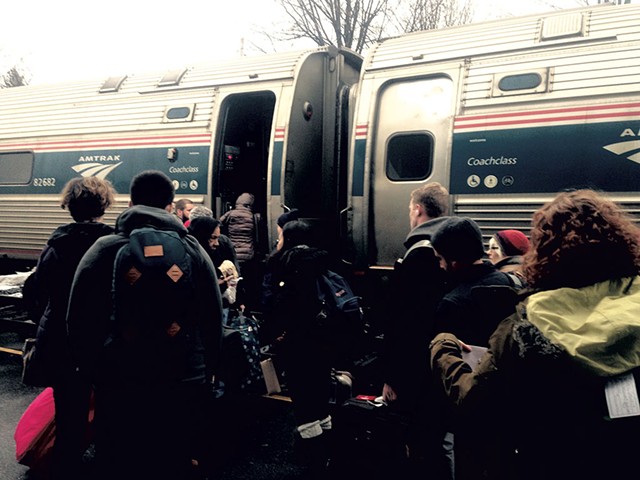 Every seat was occupied in the waiting room at the Essex Junction Amtrak station on the first Wednesday in January. Passengers going south to New York City and Washington, D.C., spilled onto the platform next to the tracks. The drab station was the center of activity as the shops and restaurants in the old commercial buildings along Railroad Avenue began to open.

With a blast of its horn, the Vermonter arrived promptly at 9:54 a.m. from St. Albans, and 110 people climbed aboard the train. Such large crowds delight Essex Junction leaders, who want to boost train ridership in the historic railroad town.

The goal is "to put the junction back in the Junction," said George Tyler, president of the Essex Junction Board of Trustees.

To that end, he and his colleagues are doing everything they can to accelerate the proposed extension of passenger rail to Montréal, which they figure could bring throngs of Canadians to Essex Junction, the train's sole stop in Chittenden County. It would restore the old Montréaler service that for decades brought tourists and skiers through Vermont, linking Quebéc and Washington, D.C. The trains ran until 1995, when Amtrak discontinued the run because of financial problems. St. Albans became the northern terminus, and the line was renamed the Vermonter.

Citing renewed interest in rail and a national increase in Amtrak ridership, state officials predict the new service to Montréal will start in 2019. "Everything that needs to be done is in Canada," said Dan Delabruere, rail director at the Vermont Agency of Transportation. "We're ready on the Vermont side."

Village leaders are touting other rail projects, too, as part of a broader village revitalization that encourages better pedestrian access, more street life and taller buildings in the core of the commuter burg.

For years, the area around the Junction sprouted strip development, parking lots and outlet stores while commercial spaces in the historic center sat empty. No more. New planning and zoning goals promote downtown-style redevelopment and seek to inject more life into the village.

"This community came into existence because of rail, and one of the best things we can do is take advantage of this fact and redevelop our rail assets," said Tyler.

Originally named Painesville after Vermont governor and railroad owner Charles Paine, the village in the town of Essex earned a different moniker in the 1850s. It became known as "the Junction" because at least six rail lines chugged through it.

In the 1880s, Middlebury native Edward J. Phelps, a prominent lawyer and diplomat, found himself stranded there after missing a connection. He memorialized the experience in a poem, "The Lay of the Lost Traveler," that reads:

With saddened eye and battered hat

And eye that told of black despair,

On wooden bench the traveler sat,

Cursing the fate that brought him there.

With thought intent on distant homes,

Waiting for that elusive train

And paralyzed in every function!

I hope in hell

His soul may dwell

Bad press aside, the Junction's name stuck, even after the train lost ground to the automobile in the 1950s. The Junction became known for chronic rush-hour congestion at its notorious Five Corners crossroads, where Route 15, Route 2A and other main arteries meet. Backups are still an issue.

In addition to the Montréal route, another top priority on the 2015 state rail plan is working to restore Amtrak passenger service between Rutland and Burlington. Longer-range, the state is looking at a proposal for commuter rail from St. Albans to Montpelier, through Essex Junction.

Meanwhile the cramped Essex Junction station — built in 1957 on the same spot where a 19th-century station was torn down — is the busiest stop in Vermont for passenger trains. Central New England Railroad and its parent freight company, Genesee & Wyoming, own the homely building. But neither of those entities — nor Amtrak — wants to improve the squat one-story structure that resembles an old gas station, with a flat roof and peeling paint. Inside, passengers sit in a waiting room the size of a small living room.

Improving the station has become the village's mission, Tyler explained during a walk around Railroad Avenue shortly after the Vermonter pulled away. Last year trustees unanimously approved a $1.2 million renovation that would improve access for people with disabilities, add a historically inspired pitched roof with a canopy for people waiting outside the building, and spruce up the waiting room and bathroom.

"What is greeting them now is this run-down station — with one bathroom — that's closed most of the time," Tyler said.

Its appearance is "an embarrassment to Vermont," said Greg Morgan, the volunteer chair of the Essex Economic Development Commission.

Village leaders are seeking federal grants to pay for the station's renovation, and, if they fail to find funds, it won't happen. Tyler said a recent meeting with new Agency of Transportation Secretary Joe Flynn left him feeling encouraged.

A grant from the Chittenden County Regional Planning Commission paid for a rail-related improvement that was completed in November: a new pedestrian-bike path that runs along the track from Central Street toward Essex High School. The short, fenced-in path was designed to discourage students who walked the tracks to the convenience store near the station.

"It was a rite of passage," Tyler explained.

This year, village officials expect to break ground on another project that will improve pedestrian access near the station — the Crescent Connector. The road project will create a small bypass in the village center that arcs to the east of the Five Corners. It could divert thousands of cars around the congested crossroads and enhance walking and biking through the village center.

The hodgepodge architecture at Five Corners is changing as well.

A new four-story apartment building with street-level commercial space and underground parking was completed last year on Pearl Street. Another four-story building, possibly senior housing, is planned for next door. The denser development is meant to promote walking to stores, restaurants and businesses — more in keeping with the village's goals.

A busier train station could bring more people and stimulate demand for new coffee shops, brewpubs and stores, said Morgan, a retiree who lives a block away. "It just makes sense that if there's more people coming through Essex on the train, that there would be economic value to that."

But not everyone is convinced. Tom O'Brien owns Murray's Tavern, which has been located for half a century across Railroad Avenue from the station. He bought the local watering hole 30 years ago and kept the name. "If I changed it to O'Brien's, they'd just say, 'It's the old Murray's,'" he explained. "Why bother?"

Train passengers rarely find their way into the bar today, nor did they when the Montréaler was running, O'Brien said.

If that service is restored, "I don't think it's going to make much of a difference here in the village at all," O'Brien said. He's also skeptical about commuter rail, recalling how former governor Howard Dean pushed for the Champlain Flyer that operated between Burlington and Charlotte from 2000 to 2003. The short-lived pilot project had low ridership, and critics derided it as a waste of money. Dean's successor, Gov. Jim Douglas, pulled the plug on the Flyer shortly after his inauguration.

Very few people used it then, and very few would use it now, O'Brien predicted.

Supporters, though, saw the Champlain Flyer as a visionary first step toward an alternative transit system that could reduce car-related pollution in Chittenden County. Burlington's Union Station, owned by Main Street Landing, was renovated in 1997 in hopes that passenger rail service up the western flank of the state into the Queen City would be restored. Twenty years later, it still hasn't happened.

Parking, not public transit, is the bigger issue in Essex Junction, according to O'Brien. "Anybody that wants to come in and set up a business, you've got to come in and figure out the parking problem first," he said.

The Junction is also thinking about the future of freight rail. Train traffic already travels through the nearby 740-acre campus of GlobalFoundries, formerly an IBM facility. Last year village leaders tweaked local zoning to allow a freight rail yard there.

For now, the company does not use the rail line and has no plans to partner with any companies that do. But it's open to discussion, said Janette Bombardier, the senior location executive for GlobalFoundries.

"We work with people as long as it ... makes business sense to us," she said.

GlobalFoundries leases space to various companies, and the campus functions as a tech park, she added. The company has about 2,800 employees, but about 5,000 people work on the property. The campus has its own wastewater treatment plant and roads — valuable infrastructure for the state and the region, she said.

Hopefully, the train to Montréal will be up and running long before anything like that happens.

There are still some hurdles to overcome, said Chris Saunders, a field representative for U.S. Sen. Patrick Leahy (D-Vt.), who has been a big booster of the Montréal line. Saunders cited the complexity of working with two governments.

In December, the U.S. Senate passed a bill intended to simplify the customs process on cross-border flights and train routes between the U.S. and Canada. It permits the Vermonter to cross the border without stopping and to instead face U.S. and Canadian customs officers at the train station in Montréal.

Although the Parliament of Canada must pass similar legislation, the country has signed on to a preliminary agreement with the U.S. to expand preclearance operations in Québec.

Back in Essex Junction, station keeper Al Villa is hopeful. The fourth-generation railroad man got his first job at the St. Albans station back in 1962, when it paid $2 an hour. He welcomes the sight of 200 people lining up to board a train. When they ask when service will be extended to Montréal, he said he tells them: "I think it will come back."