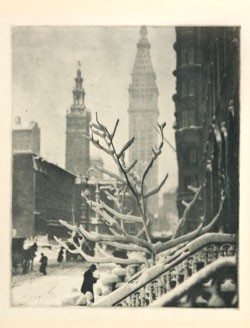 It isn’t often that a show of fewer than 25 works manages to demonstrate a transformative shift within an entire art form. The Middlebury College Museum of Art does achieve that, beautifully, in “Camera Work: Stieglitz, Steichen, Strand and Company.”

This compact exhibit includes a couple of original copies of the avant-garde journal Camera Work, in addition to a sampling of outstanding photos that appeared in its pages over its brief lifespan (1903-1917). Kirsten Hoving, a Middlebury professor of the history of art and architecture, assembled the show with help from students in her 2011 course on Alfred Stieglitz and Camera Work. A judicious selection of images allows viewers to trace photography’s stylistic transition from dewy romanticism to muscular modernism.

At the time of Camera Work’s birth, serious photographers were striving to persuade the arbiters of taste to confer artistic status on a medium that had been invented only 50 years earlier. Advocates of photography as a fine art sought to make their case by imitating the kind of painting fashionable in the United States at the end of the 19th century. Arcadian landscapes and soft-focus portraits were given photographic form by a band of shooters known as pictorialists.

Edward Steichen created the urban equivalent of a ghostly mountain vista in “The Flatiron” (1904). In this nocturne, the famously prow-shaped Manhattan skyscraper is caressed by fog, with bare branches feathered across its façade. A Steichen self-portrait is no less dreamy. It’s heavy-handed, however, in its attempt to gain admission to the temple of fine art. In the photo, Steichen holds a painter’s palette and brush as he gazes at his audience intently, with the faraway eyes of a visionary.

Art by association is also clearly the intent of Steichen’s photographic portraits of French sculptural giant Auguste Rodin (1840-1917) and the accomplished American painter William Merritt Chase (1849-1916). In the earlier (1902) of two images of Rodin included in the show, Steichen’s style has already begun to emerge from the mists of pictorialism to present his subject, a pioneer of modernism, in a strikingly severe pose. Rodin is made to look like a sculpture, with his darkened profile starkly contrasted to the white marble hulk of his “Monument to Victor Hugo.”

The high-minded ambitions that Stieglitz brought to photography are expressed in Camera Work through an insistence on exacting technical standards. The works he published were all products of the photogravure process, which involves a complicated series of steps leading to the etching of a photographic image onto a copper plate. The resulting print can be identical in quality and artistry to the work of fine-art etchers such as Rembrandt and the Italian fantasist Giovanni Battista Piranesi (1720-1778).

Paul Strand, a prophet of photographic modernism, may have had Piranesi’s haunting “Imaginary Prisons” series of etchings in mind when he framed one of his most memorable shots. In this photo published in Camera Work in 1916, commuters wearing dark overcoats and casting long, wintry shadows troop past the enormous, darkened windows of a Wall Street building that resembles a penitentiary.

The centerpiece of the Middlebury exhibit is Stieglitz’s “The Steerage,” from 1907. A text panel accompanying this piece quotes his explanation of what caught his eye in this angular arrangement of the gangway, smokestack, funnel and rigging of a crowded, double-decked steamer. The artist’s elucidation supports the curator’s description of “The Steerage” as “arguably the most important photograph to appear in Camera Work” because it qualifies as a “turning point from pictorialism to modernism.”

Camera Work was always an elitist enterprise, even as it sought to advance a radical artistic agenda. At the outset, about 650 readers paid the annual $4 subscription price for the quarterly journal; at the end, Camera Work had fewer than 40 subscribers. It published a total of 473 photographs.

Stieglitz stands as one of the most important figures in 20th-century American art, both as an impresario and as a photographer. Not only did Camera Work champion the early, breakthrough work of European painters such as Matisse and Picasso, but Stieglitz simultaneously presided over a gallery at 291 Fifth Avenue that ushered patrons of American art and photography into the 20th century.