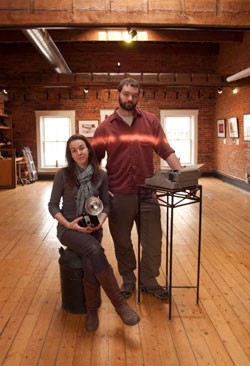 It’s not easy to track down Reciprocity Studio, tucked away on the third floor of a building with an unmarked door on College Street in Burlington. But if you’re into photography, it’s sure worth finding.

The place has been open only a month, so being under the radar may not last long. Still, discovering it one recent afternoon — after passing by the door three times — feels like stumbling on a hidden gem. The space is bright, open and inviting, with a row of almost-floor-to-ceiling windows that affords a view of the street below. The exposed-brick walls are hung with striking images by Barnard photographer Seth Butler.

In his show (which ended January 10), “Tattered: Investigation of an American Icon,” Butler captures instances of the American flag across the country in various states of casual desecration and everyday misuse. Some photos are darkly humorous: a crotch-level shot of a man in a flag T-shirt and too-short shorts, stuffing his face with ice cream in the stands of some sporting event. Others are haunting: the flag hanging upside down on an empty front porch at dusk.

Above a cluster of desks near the entryway hangs a close-up portrait of an old man wearing red-white-and-blue glasses. They’re made to look like the windshield of a patriotic car, complete with several American flags, tiny wipers and mini-headlights.

“Documentary photography doesn’t really sell,” says Monica Donovan, who owns Reciprocity Studio with her boyfriend, Judd Lamphere. “I don’t know how many people would go, Oh, I’m going to take this toothless guy with the funny glasses. I really want to put him in my kitchen.”

But Donovan and Lamphere are committed to showing that kind of photography for one simple reason: It’s what they love. Few galleries in the area show photojournalism, they say. At Reciprocity, visitors can wander through and come away “with an idea, as opposed to a piece of art that [people can take home to say], Oh, I went to Vermont, honey, and got a picture of the landscape,” says Donovan.

Donovan and Lamphere, 26 and 29, respectively, are both photojournalists. They met and began dating in photography school at the Rochester Institute of Technology. After graduation, they moved to southern Vermont and started a wedding-photography business called Eve Event Photography, which they still run as a separate brand from their new digs. Before moving to Burlington two years ago, they spent some time working at Maine Media Workshops, an experience that shaped their vision of the kind of business they wanted to start here.

“I see [Reciprocity] as becoming a sort of go-to place for photographers, whether it’s for events, Photoshop training, showing your work or renting equipment,” says Donovan. “I saw what Maine Media Workshops did for Camden, Maine: It’s just made it into this amazing little hotbed of photography. I’d like to make it a little more exciting to be a photographer in Burlington.”

To that end, Reciprocity is more than just a gallery. In fact, Donovan and Lamphere anticipate holding only about four shows a year there. The space serves primarily as a production studio for the couple’s own photojournalism and multimedia, which they produce under the name Reciprocity Studio. So far, they’ve been specializing in multimedia projects — usually a combination of photographs and audio interviews for the web — for nonprofits. They’re currently working on a piece for the Vermont Land Trust.

Donovan and Lamphere will also rent the studio to other photographers who need space for shoots, and offer photography and Photoshop workshops.

At some point, both will show their own work in the gallery — but first they have to finish it. The couple is developing an ambitious multimedia documentary exploring environmental sustainability around the world. Over the next two months they’ll travel to Iceland, France, Israel and Ireland to investigate those countries’ efforts. A photographer friend will hold down Reciprocity until they return.

“It’s going to be a long-term project, like two years,” Lamphere says. “We’re starting in Iceland because they’re going to be totally self-reliant in the next few years.”

“To be fair, they have it easy,” Donovan adds, referring to that country’s unique geography and its ubiquitous volcanoes, which make for readily available geothermal energy.

Opening the studio last month was a first for both Lamphere and Donovan: They’ve never run a brick-and-mortar business. Donovan says they were both surprised at how welcoming the community has been. “It feels like it shouldn’t have been this easy,” she says. “I mean, it was a lot of work, but it was easy. We didn’t have to fill out 5000 pages of anything.”

“She motivates me, and I calm her down,” Lamphere offers.

As for the name of their business, “It’s kind of dorky,” admits Donovan. “It’s the formula for fall-off of light in photography.”

“Nobody really outside of the photography community — and even then, only the nerdy photographer — would know it,” Lamphere says.

“But it’s also giving back what you get, in business,” adds Donovan.