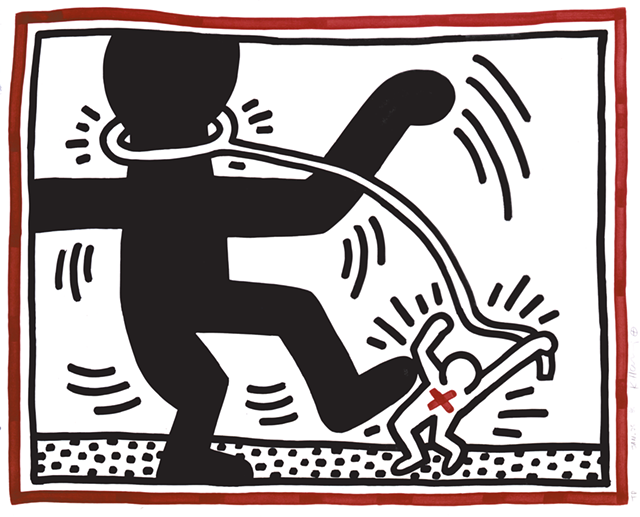 Works by two of the baddest boys of 20th-century art, both of whom lived fast and died young, are on display at the Middlebury College Museum of Art.

One of them — Keith Haring, a graffiti-inspired American artist who died in 1990 at age 31 — receives full-scale homage in the museum's second-floor galleries. More than 40 of his lithographs, silkscreens and etchings form a vivacious ensemble that's fun to look at. Signature images of a "radiant baby," dogs barking at flying saucers, and a shackled black figure kicking a smaller white one are included in this overview of a brief career that began with numerous arrests. Haring was initially a literal underground artist who chalked zesty sketches on blank advertising spaces in Manhattan subway stations.

"Post Pop: Prints of Keith Haring" is accompanied by a video tracing the artist's meteoric trajectory. It features interviews in which Haring discusses his work and that situate him at the center of New York's unruly art scene of the 1980s.

Downstairs at the Midd museum, Austrian expressionist Egon Schiele (1890-1918) receives only passing notice in a one-room show that's about not him, but an art movement: the Vienna Secession. Not included here are any of Schiele's sexually explicit images that scandalized the polite society of Europe.

"Bloom and Doom: Visual Expressions and Reform in Vienna 1900" does feature five academic studies the artist drew as a teenager, as well as a later landscape and a poster he made for a Secession exhibit. All are tame in subject matter and manner of execution, but each testifies to Schiele's talent. One work, however — a full-frontal, casually posed male nude — hints at the artistic fearlessness he would come to flaunt.

Erin Sassin, an assistant professor of the history of art and architecture at Middlebury, organized "Bloom and Doom" together with students in one of her classes. Sassin says she and Emmie Donadio, the museum's curator of modern and contemporary art, did not intend to highlight the biographical and art-historical parallels between Schiele and Haring. It's pure serendipity that the museum is simultaneously presenting works by two bohemian innovators working on different continents and seven decades apart.

If they invite comparisons, the respective exhibitions reveal important differences between the two artists, as well. 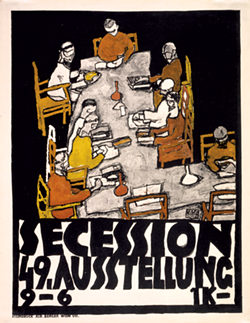 Schiele, a victim of the 1918 flu epidemic that killed 50 million people, remained apolitical in his artistic output. The Vienna Secession was a rebellion against aesthetic rigidity rather than social or economic injustice. The movement, which issued no manifesto and espoused no particular style, staged shows in a Vienna building on land leased from the government.

The aesthetic conservatism of the early Schiele drawings "made our point for us," Sassin notes. "If this is what the [Vienna] Academy [of Fine Arts] required of an Egon Schiele, then you can understand why so many artists and designers felt that it encouraged art that was not reflective of its age — and sought to secede from it."

Schiele joined the Secession as a protégé of its founder, the great Austrian painter Gustav Klimt (1862-1918). The older master, who also succumbed to influenza, is represented in "Bloom and Doom" by skillful academic drawings and a visually dramatic poster.

Before Haring died in the AIDS epidemic that has killed 37 million people, he evolved into a political provocateur whose art excoriated apartheid in South Africa and championed gay rights. His work was celebrated internationally during his short lifetime.

Haring earned some 50 mural commissions to decorate parks, hospitals, orphanages and museums in Australia, Brazil and France — plus the Berlin Wall. He achieved celebrity status as a denizen of the '80s New York demimonde that revolved around Andy Warhol. A commercially and critically successful artist, Haring sold his work at a "Pop Shop" he opened in then-swinging SoHo. (The boutique lasted for 20 years, finally closing in 2005.)

The pieces in "Post Pop" were lent to Middlebury by the Keith Haring Foundation, which the artist founded in the year before his death. It is dedicated to sustaining Haring's legacy and to supporting nonprofit organizations related to AIDS research and treatment. Reflecting Haring's commitment to involving children in his art, the foundation also assists groups focused on child welfare.

"Bloom and Doom" is the final installment in a series of three exhibits that the Middlebury College museum organized in collaboration with the New York-based Serge and Vally Sabarsky Foundation. The couple assembled an extensive collection of German and Austrian art made between 1890 and 1940 that their foundation makes accessible to academic institutions.

Together and separately, "Bloom and Doom" and "Post Pop" give expression to the slogan emblazoned on the façade of the Vienna Secession building: "To each age its art, to art its freedom."

The original print version of this article was headlined "Schiele and Haring: 20th-Century Innovators in Middlebury Art Shows"