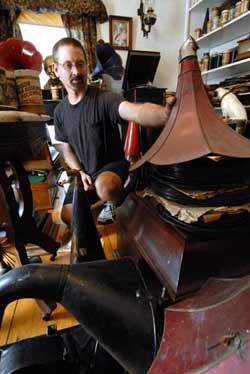 St. Johnsbury’s Rod Lauman lives in a three-story, yellow 1883 house that’s furnished and decorated in a brooding Victorian style. One of his three cats, a white female, is named Victoria.

Within these walls Lauman operates Victrola Repair Service, where he services and sells Victrolas. Yup, those wind-up phonographs with the big horns that make a vocalist sound as though he’s holding his nose while he sings something that invariably comes out “voh-doh-doh-dee-oh-doh” at 78 rpm.

A Victrola repair service? Is this some kind of Monty Python skit?

On the contrary. In fact, 42-year-old Lauman suggests he’s been laughing all the way to the bank since 1990, when he started repairing these units. It’s a full-time job. In an average year, he services 400 Victrolas from across the country, to the tune of roughly $150 a pop. That’s not counting the 50 to 100 refurbished and restored units that he sells for about $450 each. Some go for several thousand, he says with a grin.

Are there really that many antiquated music players floating around? Oh, yes, says Lauman — who, with his T-shirt, jeans and trim goatee, doesn’t look anywhere near as fusty as his surroundings. “Wind-up phonographs were made in large numbers, 10 million or more from each of the big manufacturers,” he explains, noting those makers were Edison, Columbia and Victor. Victor, which trademarked the term “Victrola” in 1906, sold so many units that its brand name become synonymous with the device. “Even if 98 percent were sent to the dump, it would leave a few million [Victrolas] in existence,” Lauman continues. “It’s hard to calculate. They are so scattered and in different basements and attics all over the country.” It seems many are finding their way to Lauman’s workshop.

To the iPod and iPhone generation, which sees the 25-year-old CD player as prehistoric, the hand-cranked, spring-powered Victrola must look pre-big bang. (Kids: Google “big bang theory” on your iPhone to understand this joke.) But the Victrola was the home entertainment system of their great-great-grandparents’ generation. The phonographs had a retail price of $25 to $30 in the early 1900s; buying one was the equivalent of getting a flat-screen television today.

Speaking of TV, observant folks will recognize the Victrola as the model for the Grammy Award statuette. (Grammy is short for gramophone.) In fact, multiple Grammy-winner Beyoncé Knowles owns one of Lauman’s players, a Victor Model 4, which her staff gave her as a birthday present, he says. They also supplied the diva with a good supply of Lauman’s steel tone-arm needles.

Why? If you actually want to play a Victrola, instead of just basking in its antique charm, those backups are a must. Steel needles, Lauman says, last for two plays at best. “By the second play it’s cutting the bottom of the groove. By the third play, you’ll get distortion.”

Need for needles, Lauman says, draws customers to his business, where he soon entices them to purchase more of his services. “They’ll call for needles, and then I’ll tell them this is a mechanical piece. Every-body and his brother has squirted some oil on it, and nobody ever cleaned it,” he explains. “That caked-up mess of 80 to 100 years needs to be removed. Many will send it in for servicing.”

A basic cleaning runs about $150, though surprise malfunctions inside the machine may mean replacement parts or additional hours. Crunch the numbers, and suddenly the idea of a Victrola repair service doesn’t seem quite so far-fetched.

It never did to Lauman, who became interested in wind-up phonographs through his grandparents. They owned an old Edison disc player. “I played with it as a kid, doing skits with neighborhood kids, like vaudevillians,” he says, describing what sounds like a none-too-typical ’70s childhood. “A couple of times it stopped working, and I tinkered with it. I was 13 or 14. These are very basic motors, not rocket science, typically with three or four gears.”

Later, Lauman got inside more complex music makers such as the Edison cylinder player, which predates the disc player. Both amplify sound through a horn, but the former plays back music recorded on a cylinder that looks like a shellacked and grooved toilet-paper tube. “When you get into the cylinder machines, there is a lot of gearing,” Lauman says. “You kind of train yourself. There are manuals around, but most [of it] is trial and error.”

He advertised his services locally in The Caledonian–Record, then progressed to regional trade publications. Everything changed, however, when Lauman went online in 1997. Today 80 percent of his customers come from the Web, and his business is 99 percent mail order. Right now he has 70 units that he can’t even get to for four to five weeks. Once he opens the box and evaluates a unit, Lauman provides the customer with a free estimate. If it’s a go — nearly all are, he says — work begins.

“I have not had a complaint in eight years,” says Lauman, who lists Dorothy Kresge of the Kmart Empire among his satisfied customers. Still, he says, “with this kind of work different people have different expectations. They expect me to wave my magic wand and make 80 to 100 years go away. I can’t. I can clean a motor; I can adjust as best as possible, but I cannot make it brand new. It’s like taking your car with 200,000 on it in for an oil change and expecting it to come out brand new.”

He may not be a miracle worker, but Lauman comes close. A restored unit fairly glistens after its nickel parts have been buffed free of years of rust, and its platter spins at an even 78 rotations per minute. That’s just what collectors of old 78s are looking for: Like their vinyl-loving brethren, they just want to hear their favorite music in the format it was first recorded.

Many wind-ups reside on the dusty shelves of antique shops, but Lauman says the pieces he works on are more likely to be family heirlooms. Money for repair and restoration doesn’t tend to be an issue, and the family often wants the phonograph’s cabinetry refinished as well. (The original Victor Victrolas distinguished themselves from their competitors by enclosing the players in ornate wooden cabinets, a concept that soon caught on.)

Lauman’s workshop has the same old-time look and feel as the products he repairs. He uses no electronic devices to calibrate the tasks he does precisely by hand — often, he says, using sheer intuition.

“I have to be a woodworker. I have to be able to work with the gearing itself. I have to make sure it sounds right,” Lauman explains. He uses a large pile of his favorite 78 records — including foxtrots and big band tunes — to test the phonographs. But, though his workshop may have that time-warp feel, Lauman isn’t stuck in one. He says he listens to “everything from hip-hop to bluegrass. I also listen to The Point, of course. I take pride in my music. I have knowledge from the 1890s right up to what’s coming up today.”

As if aware of how odd his occupation sounds to people with digital expectations about fidelity, he finishes with a hearty laugh, “I’m not really a freak. I’m just an average person. This just happens to be what I do for work. I’m certainly not stuck in time.”