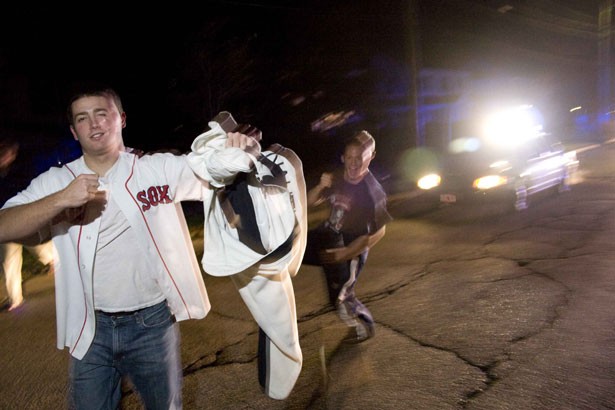 BURLINGTON - Now that young Red Sox fans have gotten a taste of the top, they're starting to act like they've been there before.

About 750 University of Vermont students took to the streets just after midnight Monday morning after the Sox captured their second World Series title in four years. Burlington police say that, in contrast to the riot that occurred after the 2004 championship, this year's gathering was much more subdued.

They did make one arrest for possession of stolen property. UVM student Tyler Horan, 19, was charged after police found him at the intersection of South Prospect and Maple streets holding a crosswalk sign, according to Deputy Police Chief Mike Schirling, a spokesman for the department.

The crowd tipped over some garbage cans on Church Street and pulled up some street signs before heading back to campus, but Schirling says some students at the tail end of the group put the items back in place. Police from surrounding departments were put on standby during the incident but were not used, says Schirling. UVM police could not be reached for comment.

By contrast, the 2004 riot caused about $35,000 in damages when students smashed windows, flipped over a van and toppled streetlights. Thirteen students were charged in the riot.