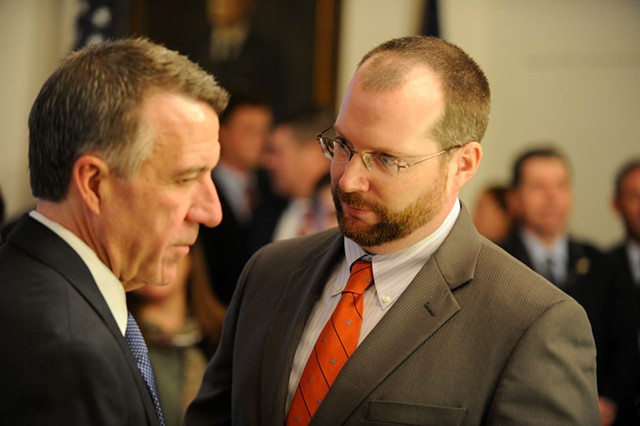 The 2018 legislative session may go down in history.

There's a chance that Gov. Phil Scott will set an all-time Vermont record for gubernatorial vetoes in a single year. And even if he falls short of that mark, his vetoes could set a new bar for breadth and depth of impact. He is poised to reject some of the biggest bills of the session, including the must-pass budget and tax bills.

"This is one of the toughest, most divisive years I can remember," said Dan Barlow, a journalist-turned-lobbyist for Vermont Businesses for Social Responsibility. He's been around the Statehouse for 11 years and pointed to the 2009 battle over marriage equality as "the last time I can remember this much heat in the building. Advocates and lobbyists are shaking their heads at the heat."

And 2009's animus was focused on a single issue. This year, governor and legislature are divided on taxes, school spending, the environment, and an array of economic and regulatory measures.

The governor's chief of staff, Jason Gibbs, blames lawmakers. "The tension is between a legislative majority that really wants to raise taxes and a governor who pledged to hold the line on taxes and fees," he said.

House Speaker Mitzi Johnson (D-South Hero) blames the governor. She said Scott has failed to take part in the back-and-forth of lawmaking. "The governor has to be involved," she said. "The number of potential vetoes is a result of an administration sitting back and reacting instead of being involved."

Johnson notes that Scott waited until May 1 to unveil a proposal to meet his own goal of keeping property taxes down. "We could avoid all of this if the governor comes to the table," she said. "Which he could have done in January, February, March or April. But May is still better than June."

Gibbs argued that Scott did engage — by delivering a "menu" of 18 school savings ideas in January and letting the legislature pick and choose. Johnson asserted that the administration should deliver specific plans, not laundry lists.

Whichever narrative you choose, the fact is: We're stuck. Adjournment is unlikely until mid-May, and there will almost certainly be a veto session in June with a packed and contentious agenda. Granted, compromise is still possible on most issues. But so far, the two sides are not budging.

Gubernatorial vetoes are few and far between. Vermont has had only 145 in its history, the first in 1839 when Silas Jennison spurned a bill to create the Memphremagog Literary and Theological Seminary. The biggest veto year was 1994, when Howard Dean killed 11 bills. But it's extremely rare to have more than three in a single year; the second-highest total is only six, in 1910.

Now, the record is in jeopardy. By my count, at least 14 bills with a good chance of passage are in the gubernatorial crosshairs. Governors traditionally don't utter veto threats in advance; Gibbs will only say that the 14 are "bills of concern," which Scott opposes in their present form.

Dean's veto-palooza centered on small items, such as village boundaries, regulation of private eyes and the Fire Service Training Council. The Scott list includes two bills that must be passed by the end of June: H.924, the state budget, and H.911, a tax reform package that includes the language that sets the homestead property tax rate. Almost as crucial is H.922, a miscellaneous tax bill that could be vetoed because it currently includes a levy on electronic cigarettes.

Then you've got the top political priorities of legislative Democrats: H.196, which would create a paid family leave program and a payroll tax to support it; and S.40, which would increase the minimum wage to $15 per hour by the year 2024.

Recently, Senate Democrats proposed a tax on prescription opiates, proceeds from which would be spent to combat addiction. It's been rolled into H.386, a bill regarding home health provider taxes and Medicaid rates, passed in 2017 by the House. Since it's a tax increase, it's on Scott's no-fly list.

On top of all that is a series of environmental bills, starting with S.260, the waterways cleanup legislation that calls for the creation of a funding source for a federally mandated effort to reduce the phosphorus flowing into Vermont lakes and rivers. Scott has already vetoed S.103, which would have tightened regulation of toxic substances. He also opposes S.197, another toxics bill that was approved by the Senate but has been split into two separate measures (S.197 and S.123) by a House committee. And Scott has "concerns," Gibbs said, about H.904, which addresses state oversight of the processing of livestock and poultry.

Then we come to three pieces of legislation that show Scott's grim determination to hold the line on taxes and fees. S.204 would broaden an existing fee on lodging to include Airbnb-type rentals; H.764 would give Vermonters greater protection from the commercial use of their personal information and impose a $100 annual fee on data brokers; and S.85 would create a user-friendly online portal for businesses interacting with state government.

The latter would increase annual business registration fees by a measly $2, but that's $2 too much for Scott.

"This is an absolute bright line," Gibbs said. "[Scott] will not cross it."

"This is one of thetoughest, most divisive years I can remember." Dan Barlow tweet this

While top lawmakers accuse the administration of failing to engage, Gibbs says the Democratic legislature is playing a game of chicken, "sending the governor proposals that they knew he would veto, solely for the purpose of generating news coverage of those vetoes."

I've just listed 14 bills that, in their present form, are targets for the veto pen. There are others that would almost certainly be vetoed — such as two measures that could lead to a carbon tax and a universal primary care bill — but they are virtually certain to die in the legislature.

One more detail: Three of the 14 bills (S.85, 204 and 260) were approved unanimously by the Senate. Still, they're too much for Scott to stomach. On fiscal and environmental issues, this putative moderate is definitely governing from the right.

But, you might ask, are vetoes necessarily a bad thing? Well, no. But when, as Barlow put it, "There's a big wide gulf between legislature and governor on priorities," that's a sign of serious dysfunction. Earlier in the session, when the two branches worked through major changes on cannabis and gun laws, things seemed to be working pretty smoothly. Now, not so much.

And now we arrive at the administration's just-released, wide-ranging plan to rein in school spending. It uses $58 million in onetime funds to keep property tax rates level in the new fiscal year and claims to bank "almost $300 million" in savings over the next five years.

This extremely belated move seems designed to provoke lawmakers, who won't have an opportunity to give it due diligence. But Gibbs insists that most if not all of the plan's elements have been discussed already. "It's meant to be a meaningful starting point for wrapping up discussions that have been going on for months," he said.

Still, a plan with many moving parts is different from a list of ideas. The parts can interact in unexpected ways. That's why administrations usually put a lot of work into proposals, and the legislative process is purposefully deliberative. Instead, the legislature is being asked to approve a five-year, multifaceted program to reduce school costs in a matter of days. It bears an uncomfortable resemblance to the U.S. Congress, where the Republican majority has launched immense pieces of legislation with virtually no notice or effective review. Doesn't seem like a good way to run a government.

Funny thing: When he was running for governor, Scott proposed limiting legislative sessions to 90 days. Last year, he triggered a prolonged session with a late-April proposal for statewide negotiation of teacher health care benefits. The legislature dragged on for 135 days, plus a veto session in late June. This year, he's threatening a brace of vetoes, and he just unveiled a massive school spending plan — on day 119.

Haven't heard him bring up that 90-day thing lately.

If there was any doubt that a new corporate era has begun at WCAX-TV, it was laid to rest last Friday, when six staffers were laid off, including three camera operators. The station's on-air talent was spared the ax, but from now on, they will often have to shoot their own video.

"It's a very different world than it was 10 years ago," explained WCAX vice president and general manager Jay Barton.

Well, sure, but the changes are especially jarring for Channel 3, which was founded in 1954 and owned by the Martin family until last year, when they sold the station to Atlanta-based Gray Television. Since then, several high-profile personalities have left WCAX, including anchors Eva McKend, Kristin Kelly and Keith McGilvery and reporters Jennifer Costa, Tyler Dumont and Kyle Midura, who remains with Gray as a Washington, D.C.-based reporter. All of them had good reasons for leaving — family concerns or better job offers — but that's a lot of departures. And now the layoffs.

Barton assured his remaining 90-odd employees that the cuts are something "that we do not plan to repeat." Plans are, of course, subject to change. It's not reassuring that Barton told the Burlington Free Press that the moves were not "based on a problem with revenues."

Uh-huh. So the station is making good money, but its new corporate master wants to wring out as many dollars as possible.

It'd be easy to over-romanticize the Martins, but they did engender more staff loyalty than your typical small-market station. Under Gray, WCAX is turning into just another corporate-owned broadcaster. Which will likely mean faster turnover and further rounds of cost-cutting whenever profits fail to meet projections.

Turning to a media organization that doesn't seem to be feeling the pinch, Vermont Public Radio's president and CEO Robin Turnau is making her long-planned departure at the end of this week. Her replacement, Scott Finn, starts Monday. And Turnau is going out with a bang, as VPR released a very strong annual report last week. Member donations, sustaining memberships and corporate underwriting enjoyed substantial increases from fiscal year 2016 to 2017. Total revenues, at nearly $9.5 million, were up by more than 6 percent.

"It was a good year," Turnau said, "one of the better years we've had. It's an indication that people are engaged with VPR."

What's next for Turnau, after 29 years at VPR, including nine as its chief executive? "I'll take several months to decompress and consider my next career move," she said.