Vetiver, Thing of the Past 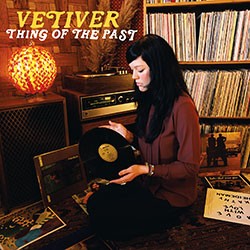 If you didn’t know better — which at first, I didn’t — it would be easy to mistake San Francisco folk quartet Vetiver’s latest album Thing of the Past as just that: a long-lost relic. In a sense, that’s exactly what the album is. Comprising oft-overlooked songs written by largely overlooked songwriters, the band’s third offering is something of an ode to bandleader Andy Cabic’s formative influences. That’s the easy summary, anyway. More accurately, the album is a living, breathing link to a bygone era of popular songwriting.

Tunes from an array of artists both noted (Townes Van Zandt, Loudon Wainright III) and obscure (Dia Joyce) populate the record; it is available, and recommended, on vinyl — the audiophiles among us will likely feel cheated listening via digital means. These are the songs that made a songwriter. Or, as Cabic puts it, his “fully realized mixtape to the world.”

Depending on your predilection towards psychedelic folk-rock, the record may recall Fairport Convention or any number of Gram Parsons projects — particularly The International Submarine Band. Younger ears may relate it more to Being There-era Wilco. Personally, I can’t help but think of alt-country supergroup Golden Smog. Vetiver recently toured with Jayhawks co-frontman Gary Louris, so there you go.

Regardless of generation, anyone with an appreciation for song craft will find the timeless quality of this disc appealing. With tasteful reverence and tact, Cabic and co. not only do justice to the source material, they shine a spotlight on it.

The performances here are pitch-perfect from start to finish. From “Houses” by ’60s psych-pop innovator Elyse Weinberg, to Norman Greenbaum’s “Hook & Ladder” (he’s the one-hit wonder behind “Spirit in the Sky”), to “Hurry on Sundown” from seminal British space-rockers Hawkwind, Vetiver seem to approach each tune with quiet awe. Their interpretations never offer any more or less than necessary, essentially allowing the songs to be themselves. Thing of the Past is the ultimate homage.