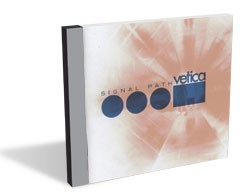 Vetica are something of an anomaly within the Burlington scene. For all of the diversity contained within this small city’s ever-shifting musical spheres, I can’t recall having come across a band that plays songs quite like this band plays ’em. What sets Vetica apart — and leads me to use the lit-word “anomaly” — is that they appear to have drawn inspiration from a wide variety of rock-and-roll acts (local and not-so-local) and come up with a formula for something that no other band in town is doing: writing and recording their very own mid-’90s, post-rock hits.

Vetica’s debut EP, Signal Path, richly illustrates what the terrain might look and sound like at the exact point where Sunny Day Real Estate, the Promise Ring (minus the lisp), the Replacements and the Gin Blossoms (“Hey jealousy-ah”) all converge. This is meant as praise and not lazy smart-mouthing.

Signal Path is a quick, well-selected five songs long, and the tone is right from the get-go. A handful of feedback precedes a crunchy yet direct lead guitar, which begins the build into a full-on rocker (“Projector”). Guitar comes and goes while Andrew Melnicki’s prominent bass lines and Jared Clement’s vocals effortlessly hold the song together and drive it forward. The song might pass through you a little quickly, but it feels good.

The second track, “Can’t Feel It,” is the most directly derivative of the aforementioned bands. For this reason — oddly, perhaps — I find it the EP’s strongest. Two guitars, from Clement and Luke Awtry, intertwine throughout, joining forces and going their separate ways almost simultaneously, and Clement does his best Robin Wilson (of the Gin Blossoms), both lyrically and stylistically.

“So Am I?” is another solid jam, with fewer hints of throwback-ness. The song, nestled among the other four, plays with rhythm more than the rest on Signal Path, and the result is breezy-but-interesting pop excellence. “So Am I?” proves, along with the rest of the EP, that a good, solid melody is just unbeatable.

Somewhere along the line, the mid-’90s apparently came to symbolize all that is ironic — at least for my peer group. I myself have never subscribed to this belief — Counting Crows have been my favorite band for 15 years. And I respect the hell out of Vetica for wearing, intentionally or otherwise, their influences and histories so well. A friend of mine recently suggested that ’90s music is becoming “cool” again, and I sure do hope he’s right.